Arthur Miller’s “The Crucible” takes place during the 16th century amidst the witchcraft hysteria in Massachusetts. At this point in history, a person’s reputation was very important to all members of society. A respectable reputation typically centered around being a good Christian, working hard, and being loyal and caring. Because a person’s reputation was so important, they would go to great lengths to protect that reputation. For an individual to intentionally destroy his reputation is an immense sacrifice.

Don't use plagiarized sources. Get your custom essay on
“ How John Proctor’s Character Shapes The Crucible? ”
Get custom paper
NEW! smart matching with writer

John Proctor, one of the main characters in “The Crucible”, serves as an example of the evolution of reputation when chooses to sacrifice his good reputation to save Elizabeth, the woman he loves.

John Proctor has a reputation as a hard-working farmer and loving husband of Elizabeth, even though he is not the perfect individual that society perceives. During one scene, he is praising her cooking, offers to buy her a heifer the next season, and plans to take her on a walk amongst some fields of beautiful flowers.

He asks if these things please her, and when she admits they do, he responds with “I mean to please you, Elizabeth” (The Crucible Act 2). Although he has faults, he does want to be a loving and considerate husband. Elizabeth has her suspicions about his fidelity, and she confronts John, but he takes great offense to her line of questioning. When he gets upset, she admits “I never thought you but a good man, John” (The Crucible Act 2). In her head, the facts are clear, but she cannot deny that he loves her and is a good husband.

Their life continues with John’s respectable reputation intact and Elizabeth’s suspicions outweighed by the knowledge that she has a good husband.

When Elizabeth is accused of being a witch and is facing death, John jeopardizes his own reputation in order to save his wife’s life. Leading up to these events, John’s guilt about his affair is weighing heavily on him and he anticipates that his infidelity is going to soon come to light. As he considers this likely possibility, he comes to terms with the fact that it doesn’t change who he is, conceding “we are only what we always were, but naked now” (The Crucible Act 2). John realizes that his reputation may be tarnished, but he will be better in the eyes of God for atoning for his sins and can put it behind him. The revealing of his sins proved to be more dramatic than just his wife finding out – he chose to divulge his secrets to the court in order to save his wife from death. Yet when the judge insisted that he sign a confession to be posted, he could not bring himself to publicly sacrifice his good name, agonizing that he “cannot have another [name] in my life!” (The Crucible Act 4). He opted to be hanged instead of having the entire town know of his irreparably damaged reputation. John performed the courageous act to save his wife, but in the end, could not live with the humiliation of a permanently tarnished reputation. John Proctor’s reputation was severely tarnished by the conclusion of “The Crucible”.

He enjoyed a good reputation in the beginning, and even though his wife had her suspicions about his fidelity, she loved him and admitted that she knew he was a good man. He divulged a secret that would save his wife’s life but, in the end, could not admit publicly what he had done, instead choosing death over a diminished public reputation. “The Crucible” and John Proctor’s choices dramatically illustrate the importance of one’s reputation in this difficult time in history. 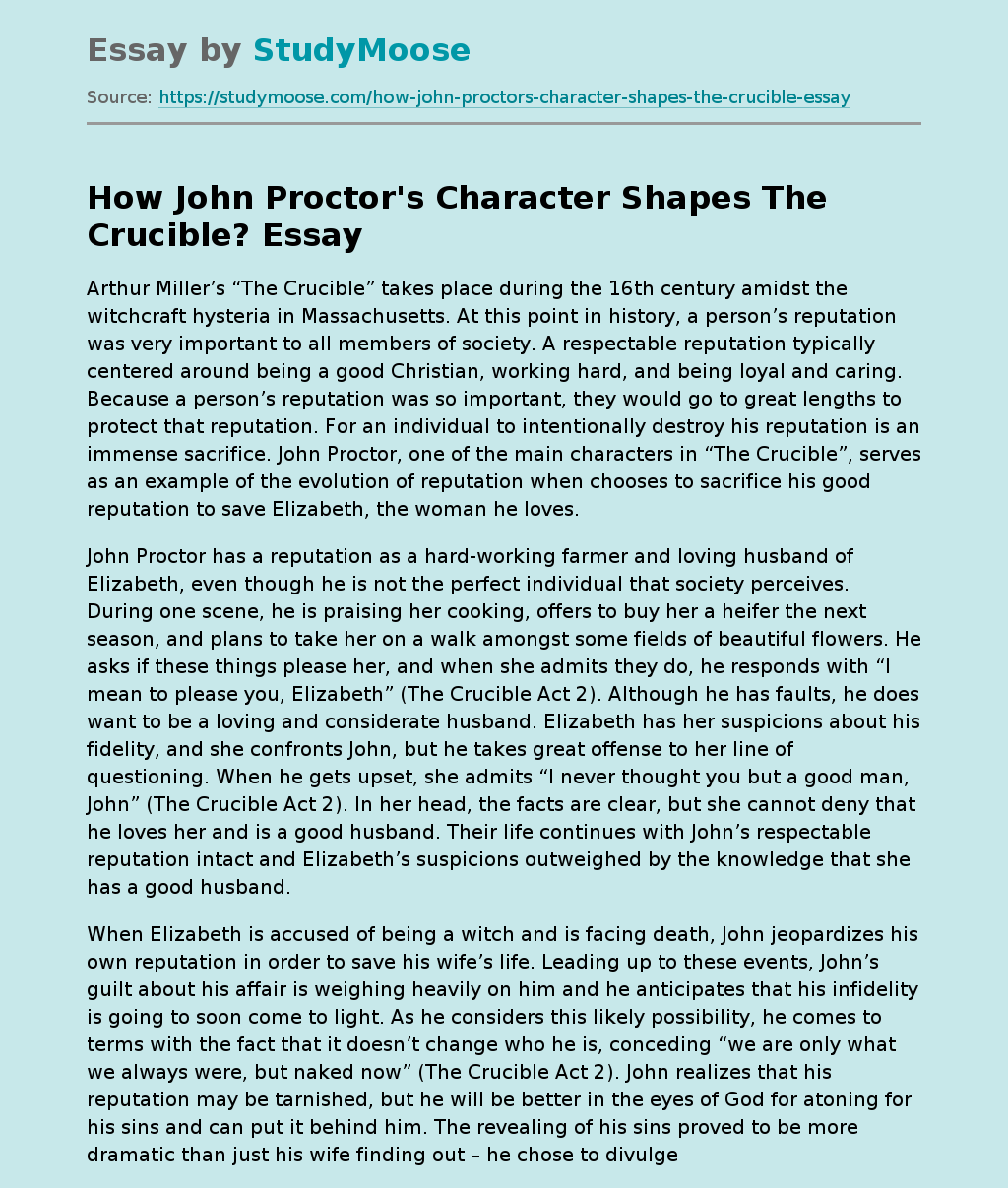