A flawed hero is defined as a character that has heroic traits but also has flaws or makes mistakes that lead to their downfall. John Proctor’s flaw was his pride, and his willingness to protect it. Unfortunately, Proctor dies from his commitment to protect and honor his name. Throughout the novel, it is clear that Proctor’s flaw is his pride. “He was the type of man- powerful of body, even-tempered and not easily led- who cannot refuse support to partisans without drawing their deepest resentment.

Don't use plagiarized sources. Get your custom essay on
“ John Proctor The True Tragic Hero ”
Get custom paper
NEW! smart matching with writer

” (Proctor 20). Throughout the novel, Proctor defends himself and Elizabeth from accusations of Abagail. As stated by John Proctor before his execution, “Because it is my name! Because I cannot have another in my life! Because I lie and sign myself to lies! Because I am not worthy the dust on the feet of them that hang leave me my name” (Miller 143). Proctor’s willingness to maintain his reputation and protect his wife is why Proctor is deemed as a tragic hero.

During the trials, Proctor refused to testify against Abigail in order to prevent his name from being tainted for adultery. Proctor hides and regrets the fact that he and Abagail had an affair, in order to protect him and his wife. As an honest man during unradical times, Proctor struggles between his pride and conscience, which leads to his downfall.

The result of Proctor throughout the novel was pressed by the actions that Abagail took on him and his wife. John’s affair creates the main struggle throught the novel and his proactive protection of Elizabeth.

Like the honest man he was, Proctor always wanted what was right, however, his affair with Abigail restricted him from achieving a totally honest life. Abagail uses hypocrite language and many lies to protect herself from being persecuted, while blindly pointing fingers to create havoc. She accuses many people, especially Elizabeth, of witchery to protect herself. Proctor, a man who had been done with Abagail, consistently fought her and the corrupt court system to save his dignity “You are pulling Heaven down and raising up a whore!” (Miller 94) Due to mounting pressures during the trials, Proctor admitted truthfully to the affair. Proctor believed that he would essentially be sacrificing himself to save Elizabeth. Proctor realized where the trials were headed, and recognized there was nothing positive coming out of the corrupt trials. As the strong individual he was, Proctor fought against the adversity of the trials and gave hope to the people of Salem, at the cost of his life. “Proctor tears the paper and crumples it” (Miller 144).

Because of his sacrifice, Proctor became an example of goodwill for others to follow. This allowed the people of Salem to realize for themselves that there can be redemption for their sins. Reverend Hale is very much aware that John was innocent of witchcraft and pities him in an attempt to try and save him. Hale realizes that Proctor is sacrificing himself in the name of God, and by sacrificing himself he in turn maintains his reputation… Proctor’s tragic flaw. “I am John Proctor! you will not use me! it is no part of salvation that you should use me!” (Miller 143). 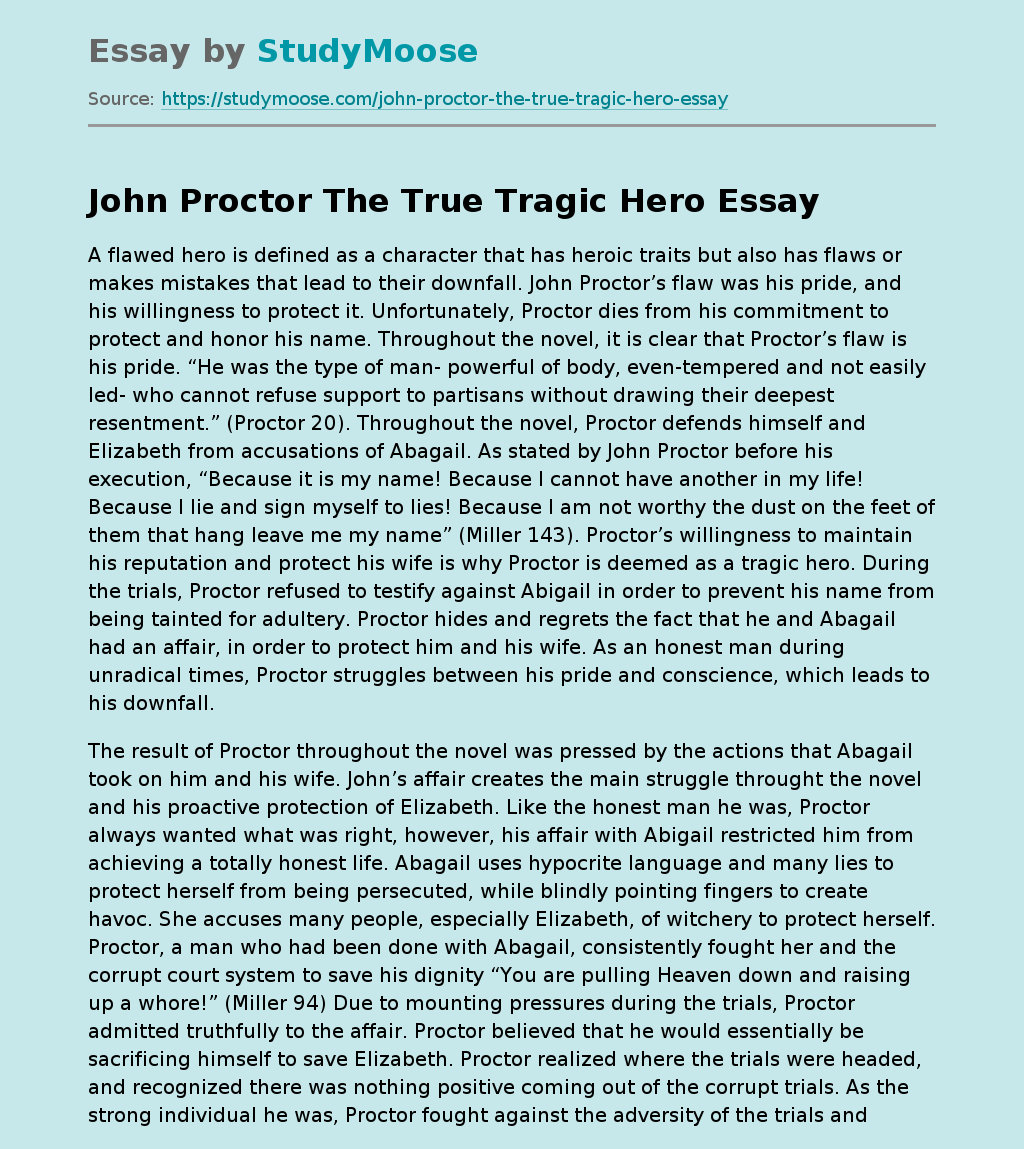