John Proctor change during the course of the play

How does John Proctor change during the course of the play? How might this change be communicated on stage? In Act one we first see John Proctor. He appears to be a very sharp and nasty man. We can see this in the way he talks to his servant, Mary Warren: “Be you foolish Mary Warren? Be you deaf? I am looking for you more than I am looking for my cows!! ” If I were producing this play on the stage I would have Mary warren cowering away from John Proctor.

Don't use plagiarized sources. Get your custom essay on
“ John Proctor change during the course of the play ”
Get custom paper
NEW! smart matching with writer

This would give the audience an impression that he is quite a nasty man.

But this all changes when he meets Abigail as she realises that he is still a powerful man even though he committed adultery with her: “Gah, I’d almost forgot how powerful you were John Proctor! ” In the same conversation he shows he has feelings for Abigail and that he is a deceitful person: “Oh, how you sweated like a stallion whenever I come near.

” This language creates a sense of a passionate relationship. If I were producing this on stage I would have Abigail trying to hold John while he is looking away and checking no one is around.

Even though he has committed lechery he is still protective over is wife as he tells Abigail that she ‘will not speak anything of Elizabeth’ to him. He also shows that he is in denial and a liar as he denies anything ever happening between him and Abigail: “Aye but we did not” The language from the conversation with Abigail creates a sense of confusion with John’s personality as he does one thing and says another.

Although he is a well-respected member of the community, as the audience we don’t really know whether to trust him or not.

He has a high expectation of Hale before he meets him and when he first meets him he is shocked by him: ” Why, Mr. Hale! Good evening to you, sir. Come in Come in. ” If I were producing this play then I would have John looking quite flabbergasted. This would show that Mr. Hale impresses him and that he respects him. He is also respectful to him: “I’ve heard you be a sensible man, Mr. Hale” This concludes how John is respectful to his fellow villagers. He is well respected in the community and this may be why. In Act 2 we see the relationship between him and his wife, Elizabeth.

The relationship in their marriage seems to be quite distant as john arrives late home. This could suggest that he stayed away longer because he wanted to avoid Elizabeth due to the fact that he has a guilty conscience: “What keeps you so late its almost dark” In a production of this play I would have the room very dark with just a few candles on the table. There would be food on the table but it would not look appetising, as it would have gone cold. There would be family pictures on a dresser at the side. This indicates that john is a family man, or so Elizabeth thinks.

Even though there are pictures of their family presented in the kitchen, this is due to their appearance in Salem. They are well respected so if they tell people that John has been unfaithful then the village will look down on them. As readers it seems that Elizabeth knows about John’s affair as they had an argument about ‘forgiving and forgetting’ but John is nasty to Elizabeth and shouts at her: “Oh, Elizabeth, your justice would freeze beer! ” Although he is irate with her he still wants ‘to please her’ as he was unfaithful to her. He does this by complimenting her cooking even though he changed it so it would taste better.

John’s temper also increases when he has arguments with Elizabeth. He constantly takes his anger out on Mary Warren even though she hasn’t actually done anything wrong: I’ll whip you if you dare leave this house again! ” This language creates a sense of him being a bully. Mary Warren always seems to be the victim. Proctor shows he is bossy also when he orders Mary Warren to ‘go to bed’. This is what adults say to young children not to 18 year olds. This gives us a sense that he is treating her like a child and is disrespectful to her.

Mary Warren is also more than John’s servant in the house as he tries to get her, along with himself, to overthrow the court to free Elizabeth. This also enables him to get revenge on Abigail for accusing his wife. If I were producing this play then I would have Mary trying to run away shouting that she ‘won’t do it’. This would indicate that she is scared of John and doesn’t feel safe near him. His anger also is shown in this Act as he ‘rips the deputy governors warrant’ up.

This is very disrespectful and rude to Mr. Hale, Mr. Danforth and Cheever as they are the people giving out warrants, leaving Mr. Danforth to sign them. John has destroyed legal documents that have been given out by these 3 men. John also shows that he is religious and is part of the belief of Christianity as he shouts at Mr. Hale: “Pontius Pilate! God will not let you wash your hands of this! ” If I were producing this play on stage I would have John with lots of anger shown on his face looking like he was going to hit Mr. Hale. Mr. Hale would turn around and start to run towards Cheever. This would indicate that John is a scary man and that getting away from him is probably the best thing to do.

His emotions suddenly change when Elizabeth appears. He turns into a caring man when they are taking her away: “I will bring you home, I will bring you home soon” This language shows that John can be caring, as he has forgotten about Mr. Hale and Cheever and is now concentrating on his wife. Proctor has faith that his wife ‘never lies’. She confessed that she doesn’t believe in witches even though her religion says she should believe in them. At the end of act 2 John feels quite scared as he is trying to make Mary overthrow the court and she doesn’t want to do it: ” My wife will never die for me!

I will bring your guts into your mouth but that goodness will not die for me! ” John character has gone from being angry to being scared in Act 2. In Act 3 John’s attitude changes, as he becomes quite a false man. This is shown when he is in the court introducing his case to Danforth: “She has signed a deposition” The language indicates that he is playing a court game as he has written a legal statement. When he is presenting himself he is very polite to Mr. Danforth, this is probably in his attempt to overthrow the court. He responds to questions very politely and doesn’t appear violent:

“John Proctor, sir, Elizabeth Proctor is my wife” Even though John stays calm, Danforth constantly tries to interrogate him. This slowly increases his temper; he keeps to his words without erupting with anger, as he knows this will do him more harm than good. When John speaks Danforth is constantly interrupting him, this is frustrating for him, as he cannot finish what he is saying: “I come not to hurt the court, I only-… ” The technique that Danforth uses to interrogate John suggests by John’s reaction that it is annoying and could start an argument.

If I were producing this play then I would have John dressed smartly so he looks professional and Danforth sat higher up than John so he looks more important. John would try to avoid looking Danforth in the eyes. This would indicate to the audience that John is a little fearful of Danforth, as he knows that he could sentence himself and his wife to death at any time. When Elizabeth Proctor was accused of witchcraft due to the poppet that was found and Abigail’s accusation this made John angry. In court John is sarcastic about this and tries to change the subject and make it funny:

“There might also be a dragon with five legs in my house but no one has ever seen it! ” This language also shows that John is biding time with the court. If I where producing this play then I would have John laughing, looking around the court but no one else would be laughing. This could indicate that he is scared and is trying to laugh it of or this could be so he can think of more negatives about Abigail and prove that she is lying. John is also indiscreet as he tells Danforth about how Abigail laughed during Prayer: “… she were twice this year put out of this meetin’ house for laughter during prayer!

” John also shows that he is nasty as he calls Abigail a ‘whore’. Consequently this proves that John Proctor wants to seek revenge on Abigail. Even though this makes Abigail sound like the victim she is not as she is the one who is making false allegations against honest, well respected members of the community. When John is presenting his own case to save his life he is like a hero and he is very brave. He tells Danforth what he actually thinks of him: “I see the boot of Lucifer, I see his dirty face, and it is my face and yours Danforth! “

John Proctor change during the course of the play. (2017, Oct 23). Retrieved from http://studymoose.com/john-proctor-change-during-the-course-of-the-play-essay 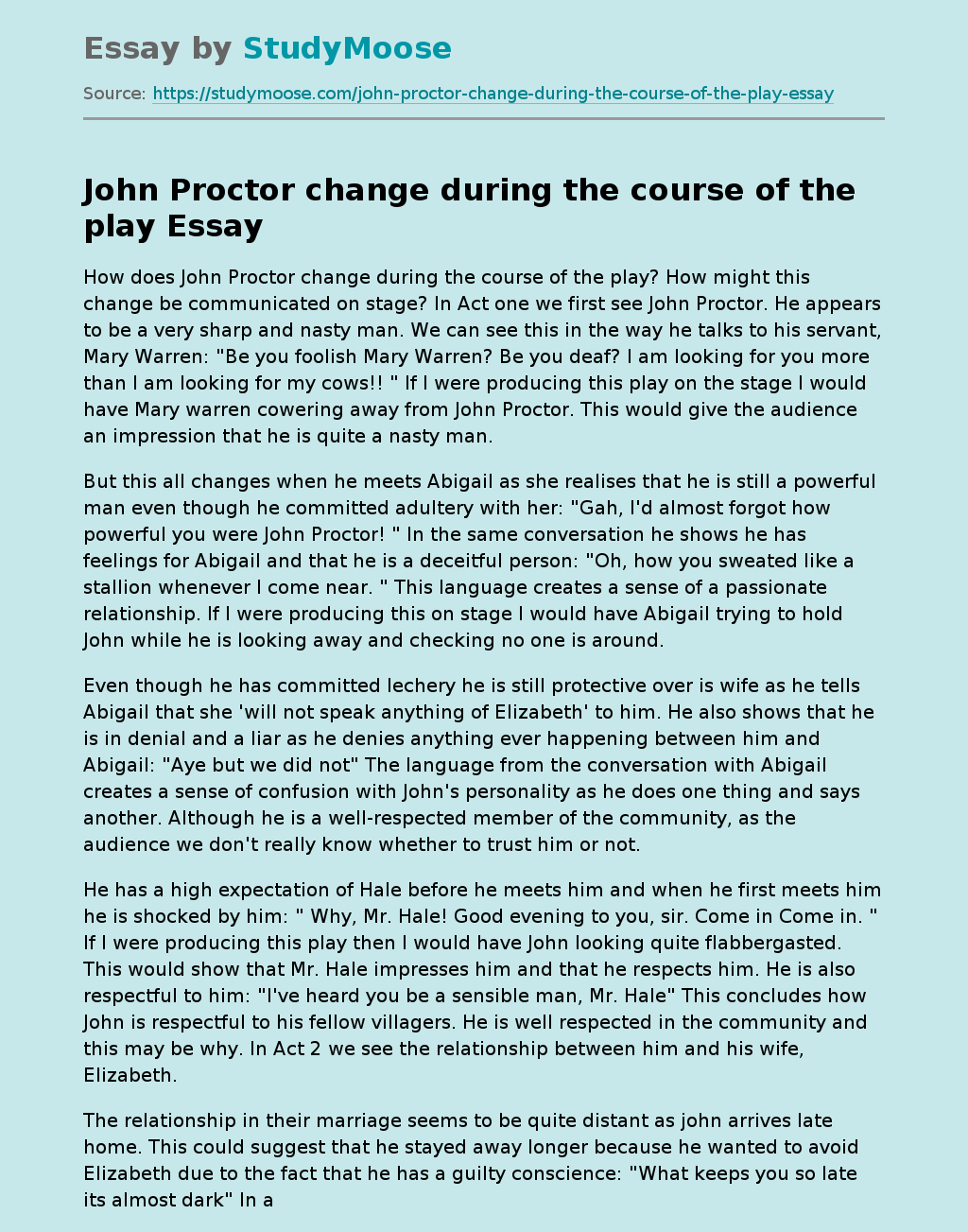