Does the character of Othello change in the course of the play?

Othello can be seen as a classic tragic hero whose ultimate flaw emerges from his very virtues. Through the course of the play the audience sees the character of Othello weaken because of his overwhelming feeling of jealousy, and over trust in the antagonist, Iago. ‘Othello’ can be described as a classic tragedy, with the character of Othello, playing the typical tragic hero. The common standard of tragedy is that the protagonist (usually of a high noble status) faces an opposing force which ultimately leads to his or hers death

Most tragic heroes have a “harmartia” (tragic flaw).

Don't use plagiarized sources. Get your custom essay on
“ Does the character of Othello change in the course of the play? ”
Get custom paper
NEW! smart matching with writer

Othello’s tragic flaw, like many tragic heroes, is not a fault in itself, but rather an excess of virtue, it is that he is too generous with trust. Othello realises this in himself albeit too late when he says in his speech before he kills him self “[I] loved not wisely, but too well” (Act V Scene ii 340). It is because of Othello’s “harmartia” is not inherent of his character, it is more the centre of his virtue, that the audience feels pity towards him.

Also ‘Othello’ is not a tragedy of state, it is a tragedy of a man (the full title of the play is ‘The Tragedy of Othello, The Moor of Venice’) so a decline of good character is almost already expected just as a downfall of a good state is expected in classical tragedy. It is generally agreed that Othello speaks in the most beautiful verse ever written by Shakespeare, and he almost singly speaks in verse throughout the whole play.

AC Bradley wrote in ‘Shakespearian Tragedy’: “if one recalls Othello’s most famous speeches… ne will not doubt that Othello is the greatest poet of them all”. It is this unique rhetoric that one can analyse the most in order to find a change in Othello’s character during the course of the play. In the first few scenes a very high precedent is set with Othello’s language.

He has long monologues all spoken in brilliant verse, “Her father loved me… ” (Act I Scene iii 127-169). The same poetry is even evident in his casual phrases that not only show his good rhetoric but also his well-tempered manner: “Keep up your bright swords, for dew will rust them. (Act I Scene ii 59). There is a notable change in Othello’s speech through the course of the play, for once Iago’s lies are said and Othello’s jealousy sparked, his speech becomes more violent and broken up. “Handkerchief- confession- handkerchief! ” (Act IV Scene i 37) and “I see that nose of yours, but not the dog that I shall throw it to! ” (Act IV Scene i 142-3) show his broken up and violent speech. Both are taken from the same scene, which is the only scene in which the audience hears Othello speak in prose.

This scene shows Othello at his most angry. His reactions are understandable considering he thinks he has just seen Desdemona and Cassio flirting with one another, and therefore they can justly be seen as a reaction to the rage built inside him. However, Act IV Scene i does show a very evident lack of Othello’s famous self-controlled manner. This is most evident when he strikes Desdemona. Bradley says “He is… lost to all sense of reality”, which indeed he is. For when he strikes Desdemona, Lodovico, a high ranking Venetian is present.

Lodovico’s reaction to his anger is “This would not be believed in Venice” (Act IV Scene i 242) he goes on further to say “Is this the noble moor, whom are full senate/ Call all-in-all sufficient” (Act IV Scene i 266). This reveals what clear change has been wrought in Othello’s behaviour for now he no longer cares about the affects his actions may cause. Even Iago says “He is much changed” (Act IV Scene i 271). As stated before, a typical tragic hero faces an opposing force that usually leads to his or her death. Read how does Othello change over time

In ‘Othello’ the opposing force is arguably one of the most cunning villains in literature, Iago. Through the course of the play Iago continually uses Othello’s “free and open nature” (Act I Scene iii 393) so that he will trust him too well and feel distanced from everyone else. “I had rather have this tongue cut from my mouth / than it should do offence to Michael Cassio. / Yet I persuade myself to speak the truth. “. (Act II Scene iii 215) Iago constantly destroys everyone else but subtly makes himself look better.

It seems as though Iago’s trickery with Othello is sure and fall proof in Act IV Scene i when Iago tells Othello that he has seen Desdemona and Cassio sleep with each other. Othello’s response is broken up and senseless: “Lie with her? Lie on her?… / Noses, ears and lips! “. This response is followed by a physical fall of Othello which symbolizes his mental fall into vicious jealousy, which these ‘fits’ portray, and thereby his downfall of character. It can also be argued that there is an actual lack of description on the character of Othello to start off with.

This is mainly because of the speed with which the main plot starts; the exposition scene mainly focuses on how much Iago hates ‘the Moor’, and it does not focus on ‘the Moor’s’ character, apart from Roderigo and Iago using many animal similes when describing him. We only know that Iago “hate[s] the moor” (Act I Scene iii 380). Therefore the audience can only judge Othello’s character by his actions in the first few scenes, before Iago starts his trickery.

Indeed this coheres with Aristotle’s book ‘Poetics’: “Character determines men’s qualities but it is by their actions that they are happy or the reverse. In Act I Scene ii, Othello’s actions are of a noble gentleman rather than those of a “devil” (Act I Scene i 93), this is because he gives such well-tempered responses to accusations “Let him do his spite” (Act I Scene ii 17) and “Keep up your bright swords, for dew will rust them” (Act I Scene ii 59. In Act V Scene ii, when Othello actually kills Desdemona, his speech, which in the scenes just past was disjointed and violent, now again is back at his usual high standard of poetry.

There is evidence to suggest that Othello still loves her for he kisses her and gives a reason before the murder: “Yet she must die, else she’ll betray more men”. (Act V Scene ii 6). However, it is ultimately up to an actor’s interpretation as to whether Othello is nervous and trying to tell himself that what he is doing is the right thing, “It is the cause, it is the cause, my soul: /… It’s the cause” or whether Othello feels as though he has to kill her as an act of justice, especially because honour is so important to him.

Although his speech is broken up and sometimes very violent, Othello’s fundamental nobility remains, for he does speak in poetry almost throughout the whole play. However, although the nobility remains his mannerisms and well-tempered nature do not, and therefore there is a notable change in at least parts of his character. His nobility is further exemplified in his death, or rather his suicide. It was thought of as a much nobler act to kill your self rather than let yourself be killed by someone else or remain imprisoned, especially as a soldier.

Shakespeare shows this in ‘Othello’ by leaving Iago’s fate ambiguous, and having Othello kill himself. Both were murderers and both would have been killed by the state. Othello kills himself so that his pride would remain to his death, also because he realises the crime that he has committed deserves death as an act of justice. However Iago runs away, he has no pride and the fact that he is returned with an uncertain future, which gives an opportunity for director’s of the play to give a definite or ambiguous end to the villain, adds to the strength of the play’s conclusion.

In conclusion, it is clear and there is enough evidence in the play to say that Othello does undergo a certain change in character, which Shakespeare expresses in his change of behaviour and speech. It must be understood that any feelings of jealousy and anger Othello felt towards Desdemona would have been exasperated greatly by Iago’s cunning and great ability to use people’s weaknesses, he was “Perplexed in the extreme” (Act V Scene ii 342).

The characters in the play divide things into black and white, good and evil. They have no concept of grey or middle ground. Othello is a black man living in a white man’s world; he has no sense of belonging and is therefore easily manipulated. This manipulation causes him to change so drastically, however he does repent and in a way returns to his ‘original’ character just before his death. He regains the calmness that characterised his early speeches and his final words and actions suggest his inherent nobility.

Does the character of Othello change in the course of the play?. (2020, Jun 01). Retrieved from http://studymoose.com/character-othello-change-course-play-new-essay 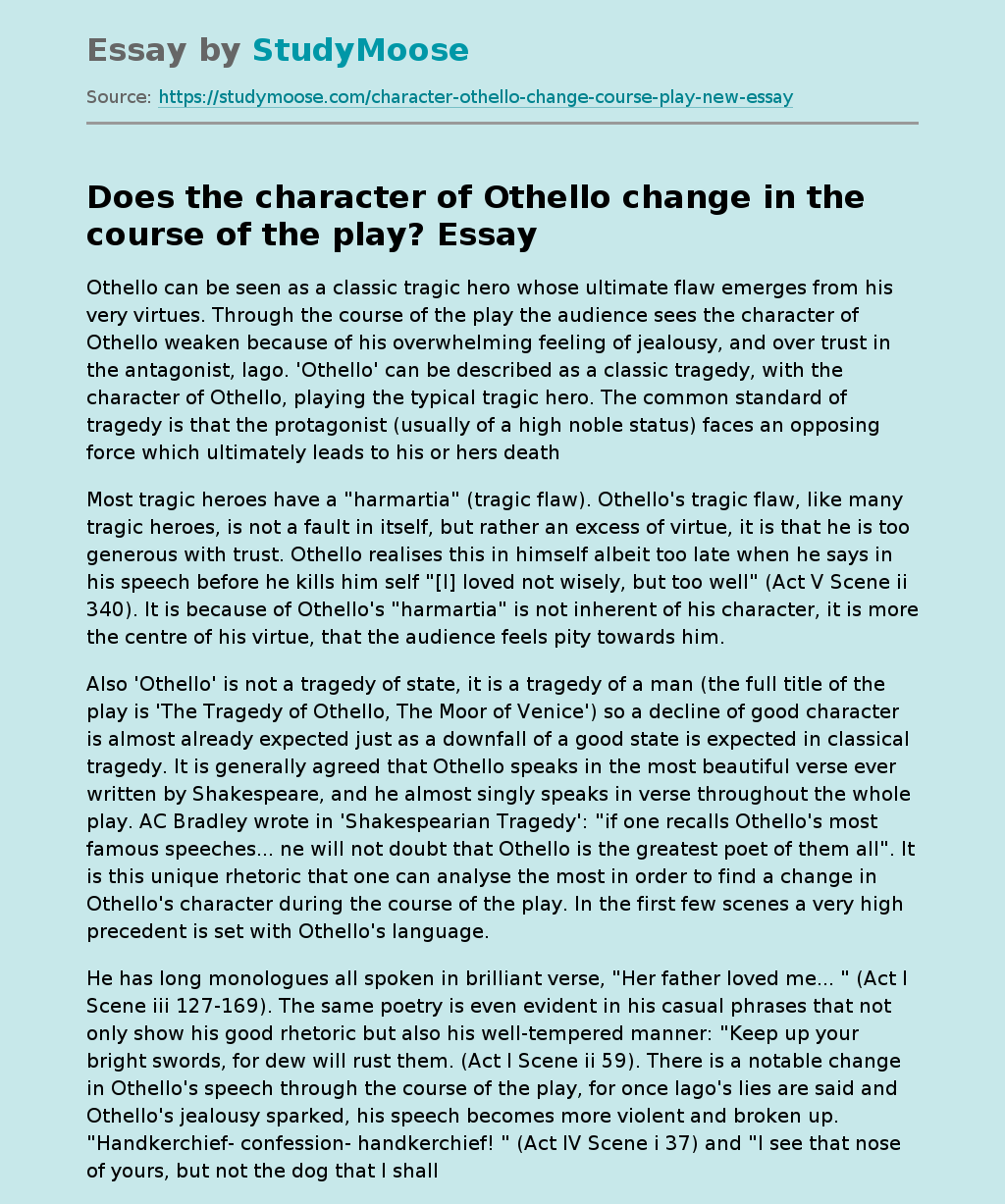