How does Macbeth's character change throughout the play?

The play of Macbeth, written by Shakespeare is all about power, greed, betrayal and temptation. It is about ambition overriding inhibitions and the conscience of a good man. The paly Macbeth demonstrate how a popular, brave, honourable soldier could commit treason against a kind, devoted King, and slowly disintegrate into an evil tyrant who had lost all human emotions all because he was gullible and was too obsessed about his own goals. Although the three witches and his wife had contributed much into Macbeth’s downfall, if he had not been so susceptible, the play Macbeth would not have been a tragedy.

Don't use plagiarized sources. Get your custom essay on
“ How does Macbeth’s character change throughout the play? ”
Get custom paper
NEW! smart matching with writer

At the beginning of the play (Act 1 Scene 2), Macbeth was portrayed as one who was loved and admired by many. He was said to be tough and courageous as he had “with his brandished steel which smoked with bloody execution like Valour’s minion, carved out a passage…” and was also described as a “worthy gentleman”. Before Macbeth fell into the witches’ trap, he was loyal to the throne and Duncan.

He fought fearlessly for the country and was then rewarded with a thaneship of Cawdor.

Banquo was Macbeth’s best friend; they fought side by side in their battles and were companions. They were concerned about each other as seen from (Act 1 Scene 3) where Banquo advised Macbeth not to believe in the witches’ prophases and that they were probably going to betray him at the end. Macbeth was a loving husband. Macbeth and lady Macbeth had an affectionate relationship where Lady Macbeth was Macbeth’s “dearest love”.

Even far away from home in a battle, Macbeth still managed to write a letter to his wife, which further showed his care for Lady Macbeth. In the early stages of Act 1, Macbeth was a successful, admired soldier; he was a good friend and he was a loving husband, but all was about to change.

Macbeth’s weaknesses were illustrated fairly early in the play. When Macbeth and Banquo saw the witches, he was afraid and was totally consumed into his own thoughts. He was unable to hide his feelings, was extremely superstitious and was morally weak. He did not completely believe the witches’ predictions at first, however, when he had received the news about his reward of the thaneship, he became totally obsessive in his ambitions to become the King. When Macbeth was uncertain if he should murder the King or not, his wife’s simple emotional blackmail placed him right back on his track of evil.

His incapability of hiding his emotions were later shown again in Act 1 Scene 6 where he had failed to meet Duncan at the gate. Presumably, he was nervous and was deciding whether to kill Duncan or not. In contrast, Lady Macbeth was able to act in front of Duncan and pretended to be an innocent host. From the events of the first several scenes, it may seem that Lady Macbeth was the one who had driven him to this evil and that Macbeth was the innocent one who had been pushed into committing a crime he did not want to complete, however, as the circumstances of the play progresses, so did his character.

When the “deed was done” and the blame was placed upon the grooms, Macbeth was tremendously remorseful for what he had done. He still had a conscience and was aware that what he had done was immoral. He was religious and claimed that he could not say “Amen”, could “sleep no more” and wished the knocking would wake Duncan. He was repentant for the murder and said the blood on his hand was “a sorry sight”. He was fearful of his action and was worried about if anybody had heard him. He was so nervous that he had brought the dagger with him out of the murder scene and was too terrified to return. On the next day, when Duncan’s deceased body was found, Macbeth knew his guilt and killed the grooms as an “act of fury”. The killing of the grooms was unnecessary in terms of hiding his responsibility for the killing of Duncan, but the killings and the emotional speech Macbeth defended himself with had instead created suspicion.

To cover-up his act of treason, he blamed the murder on Malcolm and Donalbain whom had fled from Scotland and was therefore unable to defend for them. Act 2 showed the gradual change of Macbeth’s character. After the murder of the King, he was remorseful for what he did and the deed itself could be blamed on Lady Macbeth. However, he did not stop there; he framed and killed two innocent grooms that could not have known what had happened in the previous night. He also stated that Malcolm and Donalbain were behind the murder. At this point of the play, it was noticeable that Macbeth was going to kill anybody who would stand in his way or pose as a threat to his throne.

Macbeth had achieved his goal and became the emperor, yet, he was not satisfied and was distrustful towards anybody, even his best friend and his wife. Duncan trusted Macbeth, and he betrayed him, naturally, Macbeth believed that he could depend on no one. He distanced himself from his friends and family and deceived them. The only thing that was remotely “friends” to him were the witches whom he totally depended on and trusted. Macbeth was no longer a brave, honourable soldier. He was a tyrant and a coward. He recognised that he felt guilty about killing people and therefore hired two “low life” murderers to kill his best friend and brainwashed them into thinking that Banquo made them poor. Macbeth was no longer killing to silence them, but killed for jealousy and anger.

He was jealous that Banquo had a son and was angry that he had none. In the brainwashing of the murderers, he had also persuaded himself that what he was doing was in fact right. His distrust was further demonstrated by the sending of a third murderer to spy on the two murderers as well as the murder of the two murderers. Act 3 showed the erosion of the nobility of Macbeth. He gradually became more and more evil, he was suspicious, he had cut himself off from everybody and was on his official “killing spree”. Macbeth no longer considered about killing, but became more impulsive in comparison to the murder of Duncan and were irrational acts of tyrants. It did not take him long to make up his mind about an assassination.

Despite the evil shown in early Act 3, a small speck of guilt and ethics had remained in Macbeth’s character, but not for long. In Scene 4, when there was the banquet, he was aware that Banquo was killed. He saw Banquo’s ghost and was terrorised with his own guilt. After that ordeal, he had given up his sense of righteousness. From that point, he stopped feeling guilt for anything he did and began his plan to kill Macduff and his family whom were totally innocent.

Macbeth was not paranoid about people knowing that he killed Duncan anymore and thought that there was no way for him to cover up the murder anymore. In Act 4, Lady Macbeth became mad because she had suppressed so much of her feelings and it became obvious to the doctor that Duncan was murdered by Macbeth and Lady Macbeth and they did not seem to be too surprised. When Lady Macbeth committed suicide in Act 5, it was evident that the affectionate relationship between Lady Macbeth and Macbeth did not exist anymore. Macbeth felt sorry for the death but was not terribly saddened. He was numb to death and had a loss of natural human feelings.

It was until the very end of the play and Macbeth’s life when he finally understood that the witches had betrayed him. Even when the Birnam Wood began to move, he still relied on the witches’ prophecies of that “none of women born” shall harm him until Macduff told him that he was born by a Caesarean section. Regardless of his evil acts, he had still fought an honourable fight and was brave to the end. He faced thousands of soldiers by himself which showed his courageousness similar to the beginning of the play. He knew it was too late to turn back and once again and for the final time felt remorseful because there was nobody to depend on anymore.

The play of Macbeth is about dictatorship, greed, treachery, betrayal and temptation. The play showed how a good man can quickly change into the most evil person because he fell into temptation. He had committed one evil deed which had caused him to do worse and worse. He lost trust towards all his friends and his family and had broken contact with those who loved him and instead depended on evil and entirely trusted them. Macbeth’s character had changed throughout the play because he was affected by evil and his own conscience.

How does Macbeth's character change throughout the play?. (2017, Oct 20). Retrieved from https://studymoose.com/how-does-macbeths-character-change-throughout-the-play-essay 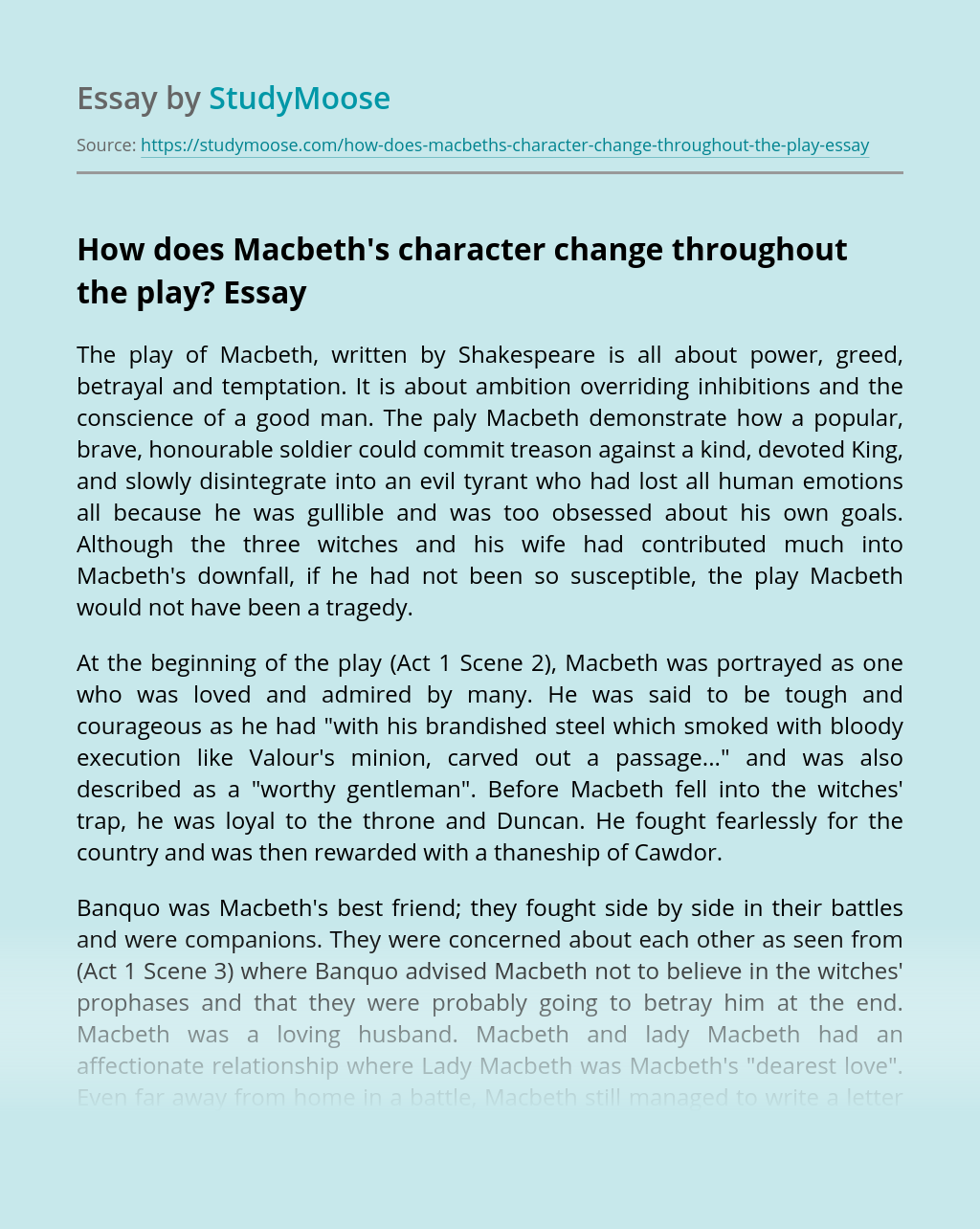