The play ‘The Crucible’ was written by Arthur Miller in 1953, during the era of McCarthyism in the U. S. A. Miller was brought in front of the house of Un-American Committee because of his left wing policies. Miller said “On that day a living connection between him and Salem was made, which prompted him to write ‘The Crucible’. I am going to explore and trace the personal crisis faced by John Proctor who is prominent character in ‘The Crucible’. Proctor was a farmer in his middle thirties.

Don't use plagiarized sources. Get your custom essay on
“ The personal crisis faced by John Proctor ”
Get custom paper
NEW! smart matching with writer

not easily led’. The respect that Salem has for him is clearly evident ‘in proctor’s presence, a fool felt his foolishness instantly’. Although he is respected in Salem, like everybody else he has his ‘skeletons in his closet’. He sees himself as a fraud, ‘he is a sinner, a sinner not only against the moral fashion of the time, but against his own vision of decent conduct’ ‘… regard himself as kind of a fraud’.

He puts on a fai?? ade – ‘the steady manner he displays does not spring from an untroubled soul’.

During the course of this assignment, I am going to explore the key themes of fear, pride, love and lust, honesty and integrity and ethics of the puritan society. John proctor’s death was brought about by a chain of events – his affair with Abigail Williams being the beginning of the chain. The lies that came to follow this chain ensured that his death was inevitable.

His affair with Abigail has a very strong and negative impact on his relationship with Elizabeth – his wife. Abigail’s deep infatuation with John Proctor ‘her concentrated desires’ enforces her deep resentment towards Elizabeth ‘with a bitter anger…

such a sickly wife’. Proctor’s rejection re-enforces her resentment towards proctor’s wife ‘she is a cold, snivelling woman’. Proctor’s house is portrayed as a nice, comfortable, homey place ‘fireplace is at the left… Elizabeth is heard softly singing… ‘ but it has an underlying tone of tension hanging in the air ‘low, dark… room is empty’. There is a strong need between the couple to please each other a need to be appreciated by each other ‘… he swings a pot… not quite pleased… take a pinch of salt… tasting again… footsteps are heard… swings pot into fireplace… ‘ 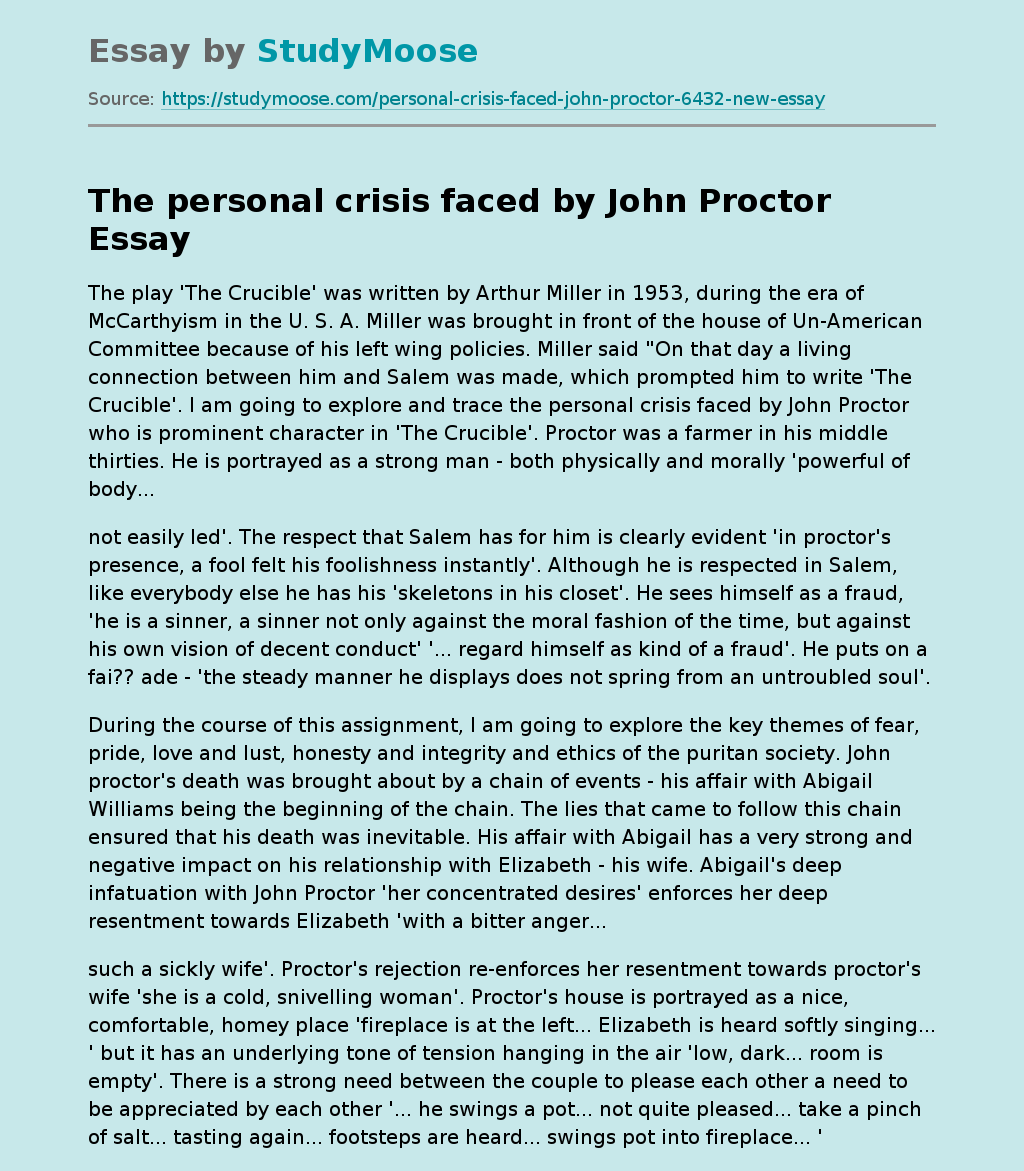