The Crucible is a play based on a true story by Arthur Miller. It is set in 1692, in a small village called Salem, which, Due to a series of events started to have witch trials. The story counts with many changes leading to an inflection point where Salem starts to fall in decadence.

One of the major turning points was John proctors decision of entering into an affair with Abigail Williams, which changed Salem inhabitants life. While the causes of the affair are believed to be multiple, the main reason was Elizabeth’s cold aptitude to Proctor.

Don't use plagiarized sources. Get your custom essay on
“ John Proctor and Abigail Williams Affair: Causes and Effects. ”
Get custom paper
NEW! smart matching with writer

In the final act, when John and Elizabeth are talking she alludes to some possible issues that prompted the affair. She says ” I have sins of my own to count, it needs a cold wife to prompt lechery.” perhaps referring to the fact that Elizabeth was an austere, cold woman, who was rigid to John. She admits that ” I never knew how I should say my love, it was a cold house I kept.

Elizabeth was not openly loving and had trouble expressing her affection for John. In the same way the fact that Elizabeth had been “a long time sick” might have driven John from her into Abby’s arms. Also, Abby’s Manipulative and opportunist personality was a factor in the affair, she took advantage of this situation, also her fierce determination when getting something she wants and she wants to be John’s wife.

One consequence is that when Elizabeth kicked Abby out of the house because of the affair, Abby grows an exacerbated hatred for her that later on will lead Abigail to accuse Elizabeth of being a witch.

We see this in act one when Abby calls Elizabeth a “bitter woman, a lying, cold, sniveling woman…a gossiping liar!” She is angry at Elizabeth for kicking her out of John’s bed and home, and also just for being John’s wife when Abby herself wants to be with John.

Later when John comes in she says, “I’m waitin’ for you every night,” expressing her longing to be with him, and then she says, “I marvel how such a strong man may let such a sickly wife determine what he will do”. Abby’s hate and envy lead to a direct accusation of witchcraft. She uses the needle in the poppet to blame Elizabeth of witchcraft, and Elizabeth is arrested. In fact, the entire reason the accusations of witchcraft started in the first place was to hide the fact that Abby had gone out in the woods to drink “a charm to kill Goody Proctor.” So, Miller arranges it so that almost the entire witch hunt is because of Abby’s hate and envy of Elizabeth, because of the affair.

Another outcome of the affair is the tension and coldness between John and Elizabeth. In act two, seven months after the affair, they are still having quarrels about the situation. The entire opening scene is them being awkward and stilted, then breaking out into a fight, over the affair, essentially. John expresses displeasure at her cold treatment and unwillingness to forgive, saying, “Your justice would freeze beer,” and Elizabeth inquiries about him going into town,” if were not Abigail that you must go hurt would you falter now? I think not.” One last consequence is john’s hatred of himself and his belief that he is not a good man, as he is trying to decide whether to confess at the end he admits ” I cannot mount the gibbet like a saint, it is a fraud. I am not that man, My honest is broke, Elizabeth; I am not good a man.” Because of his low opinion of himself from his sins he decides to confess.

He does change his mind, but at the beginning, he feels like he is not good enough to pretend integrity at the hangman’s noose.At the end, John Proctor and Abigail affair was the starter of all the misfortuned events in Salem, the witch trials started because of Abigail who was just seeking for vengeance again goody proctor. Abigail used the girls of Salem as she wished, and while she was in her search for vengeance many innocent people paid the price. 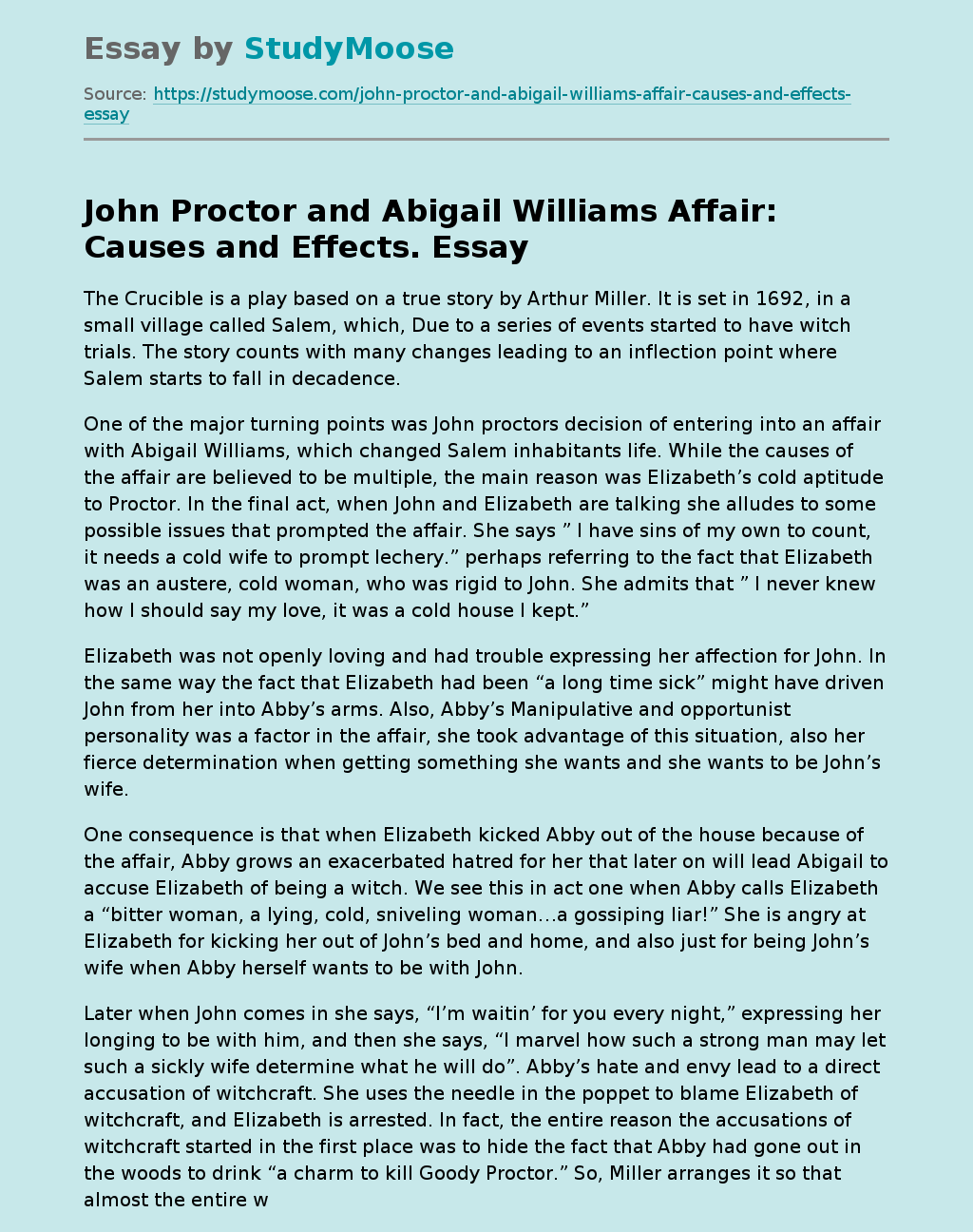