How does Miller present the relationship between Abigail and Proctor?

In The Crucible, we follow the adulterous and turbulent relationship between Abigail Williams and John Proctor, and watch it change and develop throughout the play, from Abigail trying to reinstate the affair in Act 1, to John Proctor confessing and therefore destroying it at the end of the play.

John Proctor is an honest, plain-speaking local farmer. He is an impressive presence in the room, being described as ‘a man in his prime’ and ‘powerful of body’, illustrating his strength and independence.

Don’t waste time
Get a verified writer to help you with How does Miller present the relationship between Abigail and Proctor?
Hire verified writer
$35.80 for a 2-page paper

Although some people criticise his religious commitments, he is generally ‘respected and even feared in Salem’, again suggesting his position in the community. However, we then learn that he is a ‘sinner’. Although it may be easy, at this point, for the reader to judge Proctor, forming a negative opinion of him, we then learn that he sins ‘against his own vision of decent conduct’ and regards himself as a ‘fraud’, implying that he regrets and is ashamed of his sins.

Proctor represents common sense and decency. He is not perfect, but is very aware of his own faults, unlike many others in the play. He is his own harshest judge. He believes very strongly in telling the truth but is tortured by the knowledge that he is living a lie. Although he is guilty of hypocrisy, he condemns himself for it. Here, Miller presents proctor in a more positive light and intends for the reader to empathise with Proctor, given that he regrets his mistakes and is burdened constantly by guilt.

Abigail Williams is Reverend Parris’s niece and the leader of the girls and drives the witchcraft accusations. She wants revenge on Elizabeth Proctor for dismissing her and winning John Proctor back from her after the affair. She is shown has powerful when she says to the girls: ‘Now, look you, all of you’, asserting that she is very much in charge. She is also very controlling; when she tells Mary Warren to ‘Shut it!’ and slaps her, we see her taking advantage of Mary Warren’s shy and meek character by scaring and threatening her into doing what she wants. This is repeated when Abigail destroys Mary’s newfound courage against the girls by pretending to see her spirit as a yellow bird.

Abigail also calls the good-natured Elizabeth Proctor a ‘gossiping liar’, signifying that she is sly and manipulative, adjusting the situation in order to remain innocent. She is also cunning as well as manipulative, in that she realises that she can generate hysteria in the other girls and she uses this to defend and strengthen her own argument and accusations. She inspires fear in all of the girls and the entire town: this is illustrated when we learn that ‘where she walks the crowd will part like the see for Israel’, proving that even the senior townspeople of Salem are taken in by her power.

In Act 1 we are given an insight into the complex relationship between Proctor and Abigail. It is the first scene in which we are given actual evidence of their affair, which (up until their conversation in Act 1) is only rumoured. In this scene John Proctor’s power is reinforced when Mary Warren ‘jumps in fright’ when he enters. It is clear that he has a similar effect on Abigail, who immediately flatters Proctor when they are alone, citing that she had ‘almost forgotten how strong [he is]’. She also gives a ‘nervous laugh’, showing that she likes him a lot and is slightly uneasy around him as she is always on her guard to appear more mature.

She ‘feverishly’ looks ‘deep into his eyes’, showing that he has power over her, and suggesting that she is looking as deep as she can into Proctor, searching for some form of response or reciprocation of her feelings towards him. Abigail also stands ‘as though on tiptoe’, implying that she is trying to seem more mature and of better status than she is. When someone is ‘on tiptoe’, they are trying to be more than they are, be that taller, more confident or mature, but they are often unstable by doing this and they struggle to keep their balance. It is this that causes Abigail’s downfall in the end, in that she too becomes unstable by trying to be more than she is, throughout the play. Her plan to win John Proctor backfires as a result of accusations multiplying and, as hysteria spirals out of control, it is Abigail who loses control of the whole situation and (albeit unintentionally) causes Proctor’s death.

In the same scene, we see Proctor’s attitude towards Abigail and their affair change. At first, he gives a ‘knowing smile’, suggesting that he may still have some feelings for her. Once Abigail has told Proctor that they danced in the woods, he replies in a somewhat playful tone, saying: ‘Ah, you’re wicked yet, aren’t y’!’ giving the impression that likes her too and also wants to carry on with the affair. An alternative interpretation of this is that he encourages behaviour forbidden by Puritans such as dancing in the woods (which they believed to be full of evil spirits) because he knows that there isn’t really any danger in the woods, and that it will infuriate Parris, whom Proctor despises. He also jokes that Abigail will be ‘clapped in the stocks before [she’s] twenty!’ This ironic because Abigail is one of the only people who is not punished, despite being one of the only people who deserves to be. Abigail then begins to beg John for a ‘soft word’ with ‘concentrated desire’.

The word ‘concentrated’ implies that her desire is very strong and intense, and that all the energy she has is focused on trying to seduce him. It is this that ‘destroys his smile’. It also destroys his happiness, in that he is tormented by guilt every day. It also destroys his relationship with Elizabeth as her ‘desire’ later involves targeting her at the trials and pretending that she sends her spirit to stab Abigail. It then, ultimately, destroys his life when she uses the power she has over the other girls to overpower Mary Warren’s argument against her, scaring Mary into going against Proctor and getting him arrested and hung. When Abigail ‘destroys his smile’, Proctor realises that what he is doing is wrong a makes the decision to reject Abigail. Miller uses short sentences to emphasise Proctor’s authority as a grown man, using a declarative to assert that ‘That’s done with.’ Speaking with ‘final emphasis’, we watch as Proctor becomes frustrated that Abigail has clearly not got the message and will not leave.

Miller uses another declarative when Proctor tells Abigail that she ‘will put it out of mind’, making it clear that Proctor is in control and reinforcing our idea of him as a headstrong man with good morals. Abigail’s desperation does not fade; we learn that ‘she cannot believe it’, insinuating that she has become so used to manipulating others that it comes as a shock when she herself is manipulated. Proctor rejects Abigail once and for all, using a violent image that he would ‘cut off [his] hand’ before he’d ‘ever reach for [her] again’. This image, suggesting punishment and physical harm is also symbolic of the terrible outcome of their affair.

The affair causes tension between Proctor and Elizabeth. She is paranoid about what he may be up to, asking Proctor ‘What keeps [him] so late?’ John
then asks Elizabeth: ‘Are you well today?’ showing that they are not getting on as well as they might, and Proctor is almost tiptoeing around her by trying to seem interested in her and make her feel valued. The tension increases further when Proctor says: ‘Cider?’, suggesting that he is tired of her and is growing impatient that she is forgetting things. Miller’s audience of the 1950s would have been horrified that Proctor orders Elizabeth around in this way, especially when she is innocent and he is the one in the wrong, though this would have been normal in the 1690s, when women were regarded as their husband’s property.

Abigail does not appear in Act 2. Nevertheless, she has a strong influence over the course of events. Not only does she cause tension between John and Elizabeth, but her presence is felt when Proctor struggles to name all of the Ten Commandments. He names all of them but the adultery commandment, meaning Elizabeth has to ‘delicately’ remind him. Proctor tries so hard on a daily basis to forget about his affair with Abigail and move on that he has forgotten the only commandment which he has gone against. It is his only sin and the only thing that ruins his otherwise good character. Abigail also drives the scene by accusing Elizabeth of witchcraft. Mary Warren comes home from court with a ‘poppet’ for Elizabeth, which has a ‘needle’ stuck in it. We then learn that Abigail fell to the floor and a needle was found stuck into the flesh of her stomach.

The reader is shown Abigail’s plot against Elizabeth and Elizabeth’s arrest is a turning point. When Proctor tells Mary that she must admit to the court how the poppet came to be in his house, Mary is frightened and says that she cannot do it as Abigail would kill her and ‘charge lechery’ on Proctor. In the context of the period, adultery was one of the worst sins and anyone found to be an adulterer would be heavily punished, possibly even killed, as John Proctor is. It is therefore through Elizabeth’s arrest that Mary reveals that she knows of the affair. Act 2 closes with Mary weeping that she cannot do what Proctor has asked her. Although Abigail is not there, her presence is felt yet again and the power that she has over the other girls is clearly shown in Mary’s terror at the prospect of having to denounce Abigail in court.

Abigail and Proctor are both complex characters and Miller chooses the two characters who the reader would think are the most unlikely couple. John Proctor hates himself for hurting Elizabeth and judges himself for being guilty of the very hypocrisy he despises in others. Abigail Williams, on the other hand, is not a good-hearted character who revels in her sins, and it is her lack of morals which allow her to hurt innocent people such as Elizabeth. An adulterous relationship would have been intensely frowned upon in Puritan times and could be viewed as either Proctor‘s or Abigail’s fault. It could be argued that Proctor, as a grown and married man, should have known never to begin the affair with Abigail.

However, it could have been Abigail, their servant, who took advantage of a difficult time between John and Elizabeth and exploited Proctor’s only weakness: lust. Miller clearly wants the reader on Proctor’s side. We know already that he is plagued with guilt and is aware of his own faults. In the end, he eliminates his hypocrisy by finally telling the truth. He is the play’s tragic hero in that he sacrifices his life and good name in order to save Elizabeth, who forgives him, saying that ‘he have his goodness now’.

How does Miller present the relationship between Abigail and Proctor?. (2016, Aug 22). Retrieved from http://studymoose.com/how-does-miller-present-the-relationship-between-abigail-and-proctor-essay 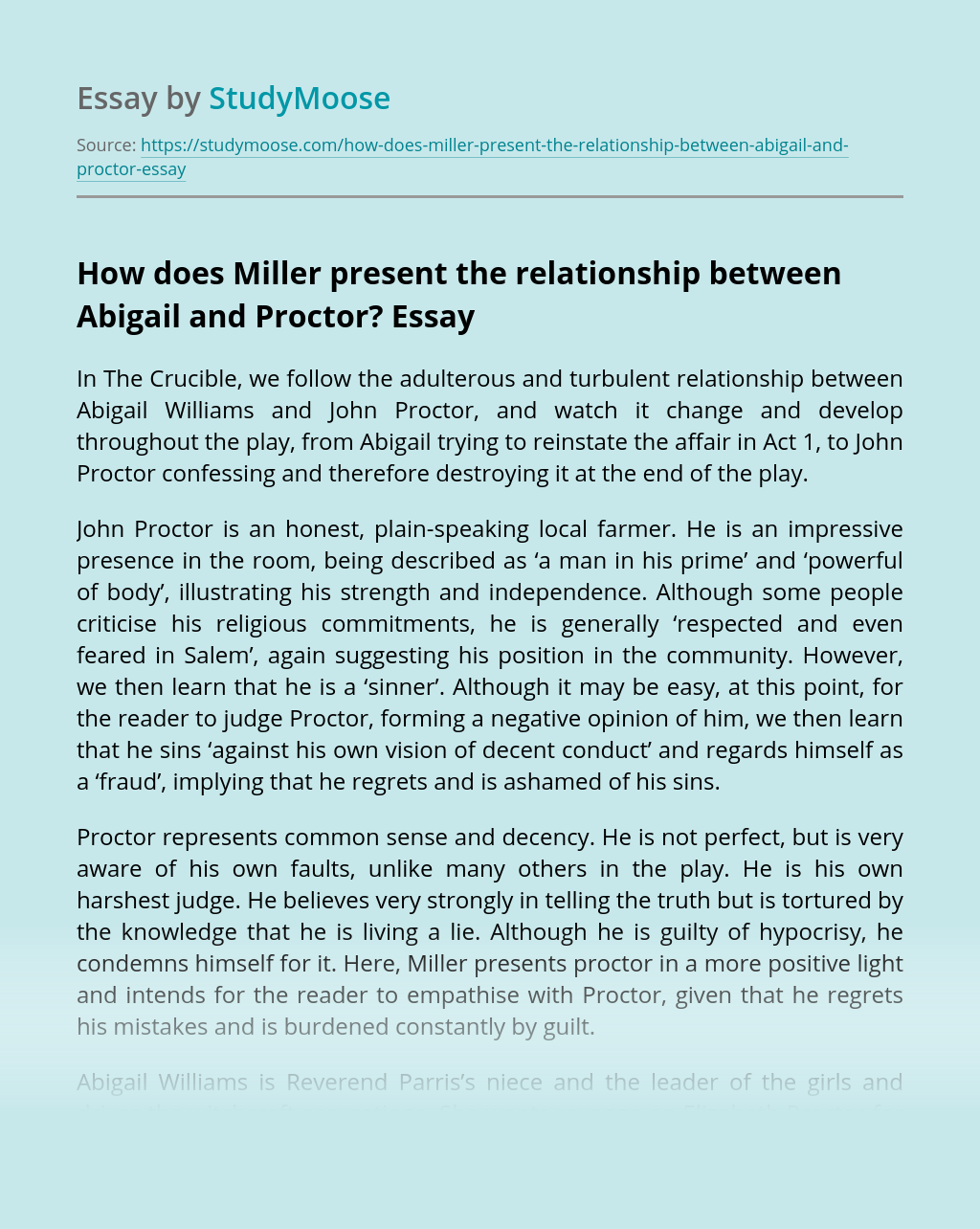 Don’t waste time
Get a verified writer to help you with How does Miller present the relationship between Abigail and Proctor?
Hire verified writer
$35.80 for a 2-page paper
Stay Safe, Stay Original