Relationship Between John Proctor And Elizabeth

In The Crucible, Miller develops the powerful relationship between John Proctor and Abigail Williams and how she wants to rekindle their affair as the witch trials are happening in Salem. On the whole, Miller powerfully conveys their relationship as toxic as it will lead to the tragic hero’s downfall.

John proctor is an honest man who doesn’t want to do wrong by his wife by repeating his mistakes of the past again following his unfortunate affair with Abigail. Miller presents Proctor as a ‘powerful of body’ man, this gives the impression the Miller respects this character and initially wants the audience to do the same.

Don't use plagiarized sources. Get your custom essay on
“ Relationship Between John Proctor And Elizabeth ”
Get custom paper
NEW! smart matching with writer

In addition, ‘A man in his prime’ shows that he has an impressive aura. He is seen as a well-respected character and ‘not easily lead’ but this counteracts his actions due to his affair with Abigail which is condemned in the town of Salem due to its very strong Puritan beliefs in religion. He is aware of his faults compared to many of the other characters.

He believes that telling the truth is the best thing and the way he is holding the truth back is torturing him.

The power that Abigail has over Proctor’s emotions and feelings cause tension between her and Elizabeth due to the fact that Proctors’ deep down still has emotions for Abigail. John looks at Abigail with a “knowing smile” at the start of the play this gives the audience the impression that although he regrets the relationship, he still thinks of her affectionately.

Abigail is the leader of the girl group and is the person who is pursuing false accusations against the people of Salem especially Elizabeth proctor dismissing Elizabeth’s emotions. This gives of the impression that Abigail is a cold-hearted character and that Miller wanted the audience to hate her. She knows that she holds the power in the group of girls with her say “Now, look you, all of you”. She also comes off as very controlling to the other girls. In the play, Betty says “you did, you did! You drank a charm to kill John Proctor’s wife! You drank a charm to kill Goody Proctor. The way Miller presents Abigail’s true colors throughout this scene shows the audience that she will go to any lengths even to the extreme to get what she desires. The audience may develop hatred for Abigail’s character as she is written as a toxic person

We see her take advantage of more naive and innocent girls in many different scenes for example where Abigail says, “shut it!” and then goes to slap her. This indicates that Abigail likes to be in charge, and she will go to any limits to threaten her even physical abuse. My opinion on Abigail is that she thinks of herself as the leader of the whole town whilst the witch trials are happening because she is the one who is leading on and pursing the convictions on innocent people.

The relationship between Abigail and Proctor began when she worked as a servant for the Proctor’s and then got dismissed after Elizabeth found out about the adultery they were committing. In act one proctor travels down to Salem to visit reverend Parris to inquire about Bettys illness and in this scene, Abigail confesses that she still has feelings for the proctor and how she wants to rekindle their relationship behind Elizabeth’s back again. In act 1 it gives us an actual insight of the complexity into their relationship when the author uses the stage directions ‘looking at Abigail now, the faintest suggestion of a knowing smile on his face’ this suggests that the fire between them stills burns and he still has slight feelings deep down even though he has chosen his wife. She then goes on to as John for a ‘soft word’ with a ‘concentrated look’ this implies that Abigail feels vulnerable around Proctor and wants to give of a persona that she’s innocent even though she isn’t as. The word ‘concentrated’ shows that her connection towards Proctor is very intense and she will try anything to seduce him and stray from the right path. With her trying so hard this breaks his smile and happiness as he is ridden with guilt of what he has done.

Proctor becomes frustrated and annoyed by the way Abigail is trying to win him over, but she doesn’t seem to catch on. This leads to her manipulating and overpowering Mary Warren to confess against Proctor and state that he does have a connection to the devil. This was a poor judgment from proctor because it causes his own tragic death. In the play Miller uses many short sentences to cause tension and emphasis in the play, it gives it an underling tone of slyness. However, in act one Proctor states ‘Abby, I may think of you softly from time to time. But I will cut off my hand before ill reach for you again’ I personally think that Proctor brings on his own guilt because if he thinks about her ‘softly’ it shows that he still thinks of her in maybe a sexual way so to say he is guilt-ridden. Abi and Proctor and two of the most complicated characters and by Miller putting them together it may have shocked the reader because they are an unlikely match. An adulterous relationship would have been larger criticized
in them days.

In conclusion, Miller obviously wants the audience to take Proctor’s side as he is being manipulated by Abigail in the play and plays in his feelings, we already know that he is being tormented by all of his guilt. He plays the tragic hero in the play by telling his truth at the end of the play to save the name of his wife Elizabeth.

Relationship Between John Proctor And Elizabeth. (2020, Oct 01). Retrieved from http://studymoose.com/relationship-between-john-proctor-and-elizabeth-essay 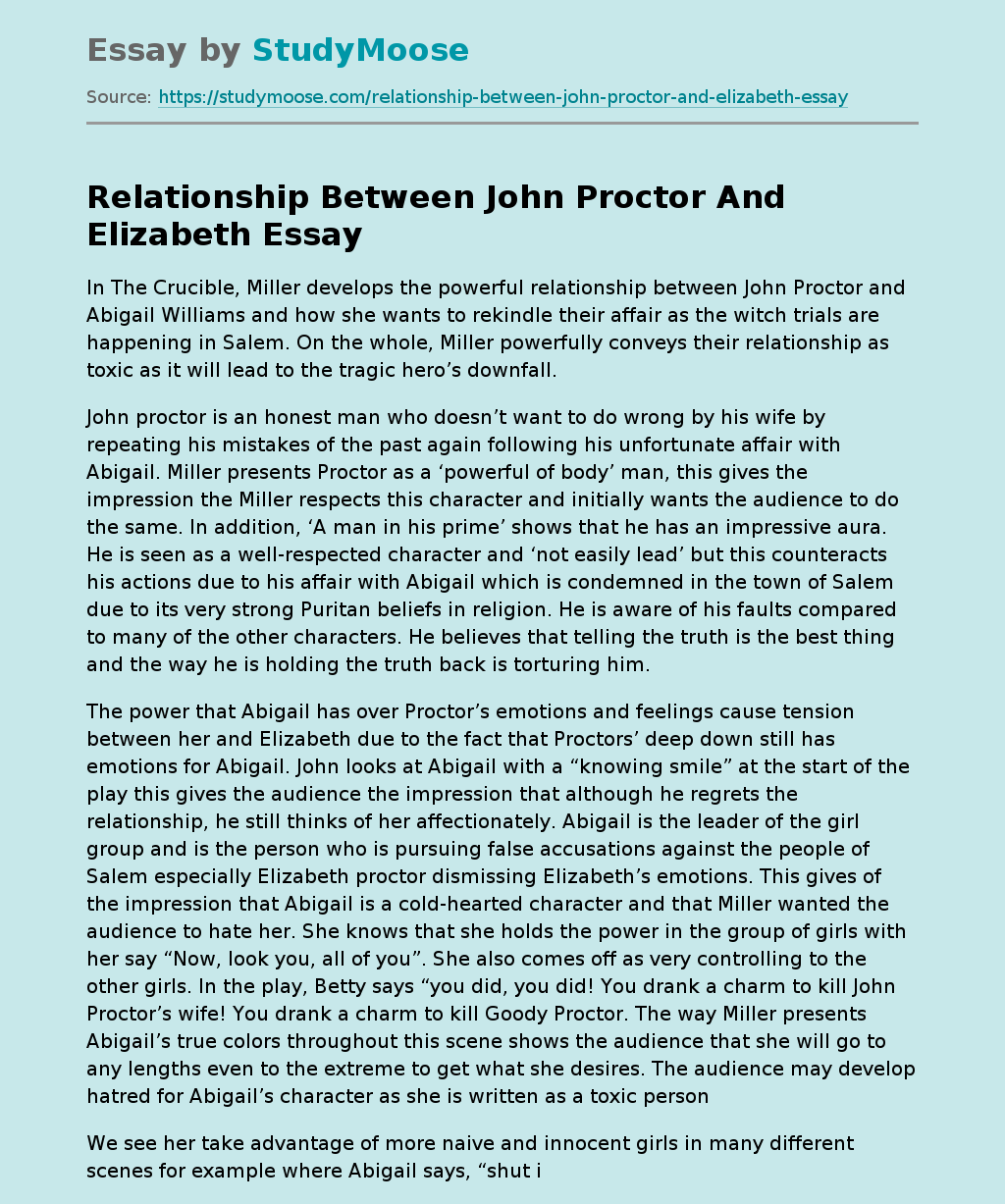