Firstly, the impression I get from Elizabeth is that she is not feeling good with her husband John Proctor, she is annoyed with him, however, she knows something is going to happen if this happens there will be friction between them and she doesn’t want friction with her husband. Helplessly she can’t do anything about it even the stage directions in the book show “she doesn’t want friction and yet she must” right before she speaks. That shows she doesn’t want to talk about anything that is going to bring up friction for example like Salem and she talks about it on the same line thereby creating them tension and friction will happen between them.

Don't use plagiarized sources. Get your custom essay on
“ Elizabeth Proctor Character Analysis in The Crucible ”
Get custom paper
NEW! smart matching with writer

The relationship between John proctor and Elizabeth is very complicated or very frustrating. You can tell inside they do love each other very much but things have changed and went on two directions for both of them. There have been lots of hurdles going on between them. In a way such as a john proctor’s relationship with Abigail is one of the main reason that made the relationship goes up and down because Abigail keeps comes back to find John and lured in between John and Elizabeth.

As an example, in nowadays if a wife finds out a husband has someone is cheating on her wife they will throw out their husband straight away however in this relation here she knows it by heart that he loves her but at the same time she loves him by through it all out. Overall their relationship is loving but their a twist caused by Abegail and that leads it to a different way.

What is she like as a mother or a wife? To me, she is very different from all the other wives and mothers sometimes but she is doing a good job. She has the similarity to a normal time but there are different. In that time she is similar to a wife, she listens to his husband and she is very biddable to her husband as she follows the commands that john gives to her like cooking, cleaning after him, and another basic day to day life staff just like a normal wife and john is very happy about this. The difference from her to other wives is that she is braver than the other wives from one part of the passage [ with her courage now]: “you can not keep it John” that shows that she is not scared of telling what she is thinking. In those days no one will have enough courage to talk to their husband like this but she did, they will be frightened to be kicked out of the house our even worse they could be executed from being a witch and hung up. As a mother, she makes a lot more effort than the other mothers and takes much more care to her son and daughter from little things like she sings her son and daughter to sleep that totally shows how much she loves her family. Nevertheless, she is fairly honest with her husband but an open relationship with his husband John.

How has she been so integral? She has been very integral to john, although other women told her that John had an affair with another woman she still listens to john and follows his rules, and been doing what he says. But most people will walk away as soon as afire comes along but she didn’t. She can stand here for her belief is because she sticks to her husband. In the passage it shows she fights back to what John has done to her at the end of the passage john Elizabeth and Abigail in the same room and then she says[ quietly she lost all her faith] do as you wish then.

However, she loves john but the more Abigail comes up the harder it is for her to go with John and shows john really loves her. She hates the thoughts that john and Abigail doing things that she is knowing or not. Elizabeth just wants to know the truth but the more truth she hears is for making her scared for being together, as a result, the truth pushes him and her apart. 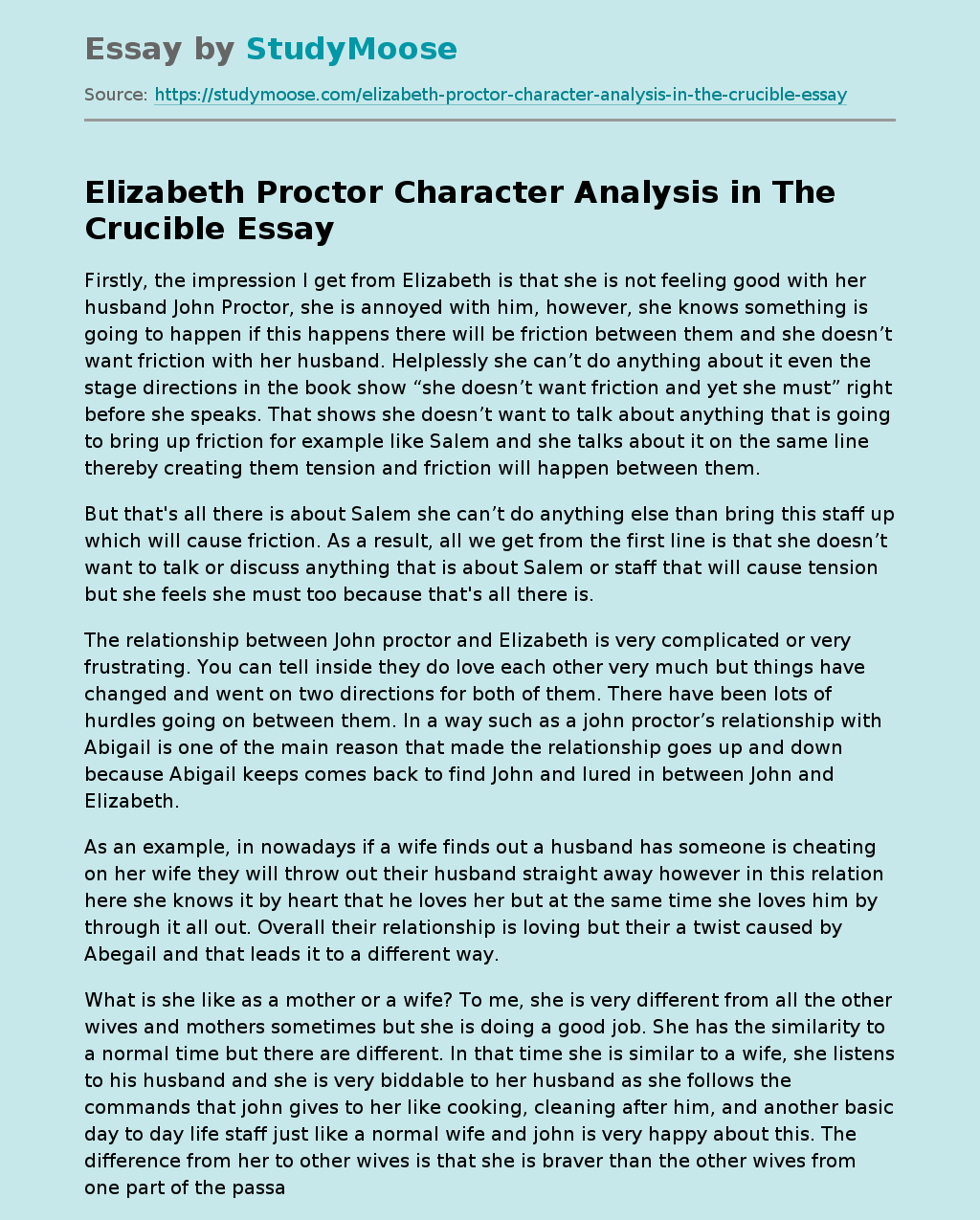