What does it mean to be different? Being different means not being the same as another or just simply being unlike in form and quality. In Arthur Miller’s play The Crucible, difference is shown between the characters Abigail Williams and Elizabeth Proctor. This play portrays the historical events of the Salem witch trials through a crowd of unforgettable characters. Abigail Williams is the malicious, deceiving accuser; whereas Elizabeth Proctor is virtuous and is the wrongfully accused.

To begin, Abigail Williams and Elizabeth Proctor are complete opposites of each other, one lies to save herself and avoid consequences; while the other lies to save the one she loves, John Proctor.

Don't use plagiarized sources. Get your custom essay on
“ Love over Lust: Elizabeth Proctor vs. Abigail Williams ”
Get custom paper
NEW! smart matching with writer

Abigail discovers she could abstain getting in trouble by making up stories to cover up her manipulative lies and by accusing other people. She previously worked as the Proctor’s servant until Elizabeth became aware of the affair between Abigail and her husband, John. Unlike Abigail, Elizabeth Proctor does not try to create problems by lying.

She is more concerned about her husband and her kids. Knowing about the affair between John and Abigail makes it more difficult for Elizabeth to forgive John. She is the faithful and religious wife of John Proctor. She lies for the very first time to save the life of her husband.

At this point Elizabeth is completely unaware of the fact that her husband has confessed. Thus, Abigail is known to be the antagonist, while Elizabeth is more of a guide mentor. In The Crucible, Elizabeth Proctor is Abigail Williams foil in several ways.

Abigail is a jealous, scheming and lonely; whereas Elizabeth is a religious, trustworthy and loving character. Abigail does everything she can to make it work, but then ends up running away from her problems. She is lonely and looks to John for comfort. Elizabeth is a forgiving character. She forgives her husband for all his wrong doings. John decides to keep his good name and is hanged as he chooses not to confess. Elizabeth forgives him because she truly realizes how much he loves her and how much she loves him.

Overall, everyone is different and has their own way of showing it. Difference is shown through words and actions between the two characters, Abigail Williams and Elizabeth Proctor. Abigail is proven to be the misleading accuser, while Elizabeth is proven to be forgiving. Maliciousness and guilt lives in the heart of the teenage adulteress, Abigail Williams; whereas truth and innocence resides in the soul of Elizabeth Proctor. 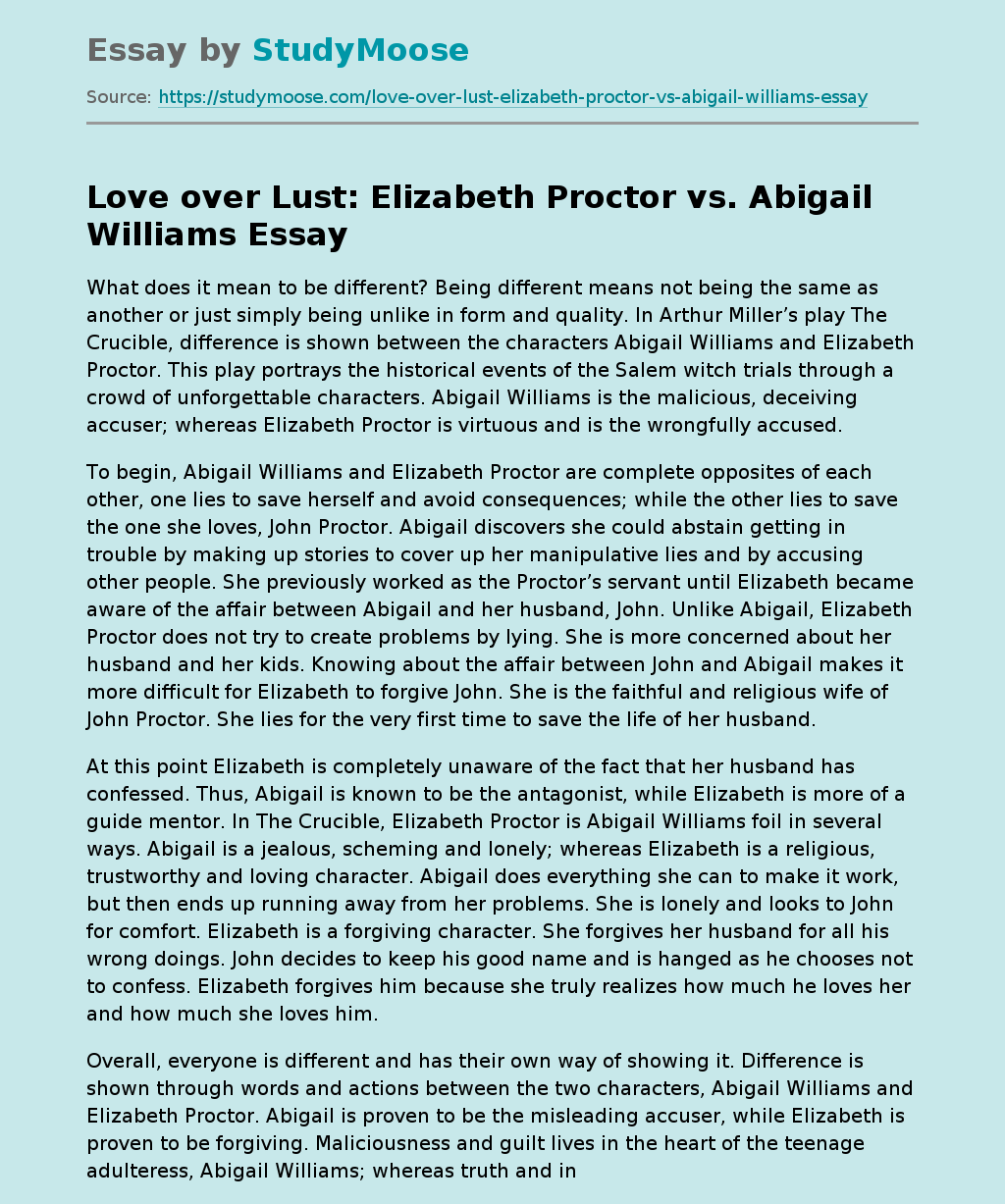