Abigail Should Be Regarded as a Victims of the Puritan Society

Don't use plagiarized sources. Get your custom essay on
“ Abigail Should Be Regarded as a Victims of the Puritan Society ”
Get custom paper
NEW! smart matching with writer

In the play The Crucible written by Arthur Miller, Abigail Williams is a controversial villain because she is both a typical instigator of the accusations and a victim of the Puritan society at the same time. Firstly, Abigail’s heartrending life experiences and the Puritan society environment which she lives in build her complex character. Secondly, in the affair between her and Proctor, Abigail not only loses love but also she is hated by her lover. First of all, the unpleasant past and the Puritan environment build Abigail’s complex character. To begin with, she is ruthless because it can be shown from her attitude towards the other girlsof Salem.

In order to prevent other girls from speaking out what they have done against the puritanical rules in the forest, she threatens these girls, “[…] I saw Indians smash my dear parents’ heads on the pillow next to mine, and I have seen some reddish work done at night, and I can make you wish had never seen the sun go down!” (Miller 20) A normal girl should never say about that. It is so early for Abigail to experience such a cruel scene as a young child.

Her parents’ death greatly affects her, as a result of which this event is likely to leave a wound on her heart. She also gradually becomes ruthless because of that. In addition, the children of Puritan society were never valued by their parents and their physical and psychological health would not be developed very well. Like her contemporaries, Abigail lacks care from her uncle in her childhood.

She is adopted by her uncle Parris Williams who a priest in Salem. At the beginning of the play, the narrator said:“He was a widower with no interest in children, or talent with them. […] like the rest of Salem, never conceived that the children were anything […] (Miller 4). Parris never cares about Abigail’s growing up and only cares about his wealth and reputation in Salem. Without the correct guidance, Abigail has to face and solve every problem she may meet in her life by herself. Even though she uses some wrongful means to achieve her purpose, she never cares about whether they are correct or not, because nobody enlightens her how to face these difficult situations. For example, when Parris asks her what they really have done in the forest, because she fears being punished, she instigates the other girls to cover up the truth, even accusing those innocent people when they are interrogated who are the devils’ servants. Moreover, the Puritanical rules restricts the entertainments of the children’s.

This also evokes these girls’， especially Abigail so that they want to seek some exciting activities somewhere.Therefore, the identity of being an orphan and her miserable childhood experiences cause the ruthless and dishonest character of Abigail, and make her become a victim of the Puritan society. Furthermore, Abigail is a victim in the love affair because she loses her reputation and gets nothing in the end. Firstly, Abigail loses her innocence in villager’s eyes of Salem. When her uncle Parris is talking about her name, Parris mentions Proctor’s wife Elizabeth and he said: “she comes so rarely to the church this year for she will not sit so close to something soiled. […] that you are now seven months out of their house, and in all this time no other family has ever called for your service (Miller 12). This shows that Abigail has lost her reputation in Salem. Her affair with John Proctor is already known by many people and this event causes nobody would like to employ her. As an unmarried girl, innocence is very important, unlike Proctor who has married Elizabeth. In her future life, no one would like to marry such a soiled girl. At the end of the play, Abigail’s ending is tragic: “The legend has it that Abigail turned up later as a prostitute in Boston” (Miller ECHOES DOWN THE COORIDOR). She has paid her reputation for love but she still loses Proctor’s love. When Danforth asks where he and Abigail’s affair happened, Proctor tells the truth: In the proper place –where my beasts are bedded.

On the last night of my joy, some eight months past. […] I beg you, sir, I beg you—see what she is. My wife, my dear good wife, took this girl soon after, sir, and put her out on the highroad. And being what she is, a lump of vanity […] (Miller 110). John Proctor would rather sacrifice his reputation than harming those innocent people including his wife. He makes his mind up to save Elizabeth and expose the Abigail’s true face at the same time. This reveals Proctor’s emotions toward Abigail at this time. There is not any love is remained in his heart, only anger and hatred. Abigail is a loser in love: she loses Proctor. She is too young and impulsive so that she never considers the consequences when she falls in love with Proctor who cannot bring her anything she wants. Thus, she gets nothing. All in all, although Abigail is a villain in this play, she is also a victim of Puritan society.

Abigail Should Be Regarded as a Victims of the Puritan Society. (2016, Mar 06). Retrieved from https://studymoose.com/abigail-should-be-regarded-as-a-victims-of-the-puritan-society-essay 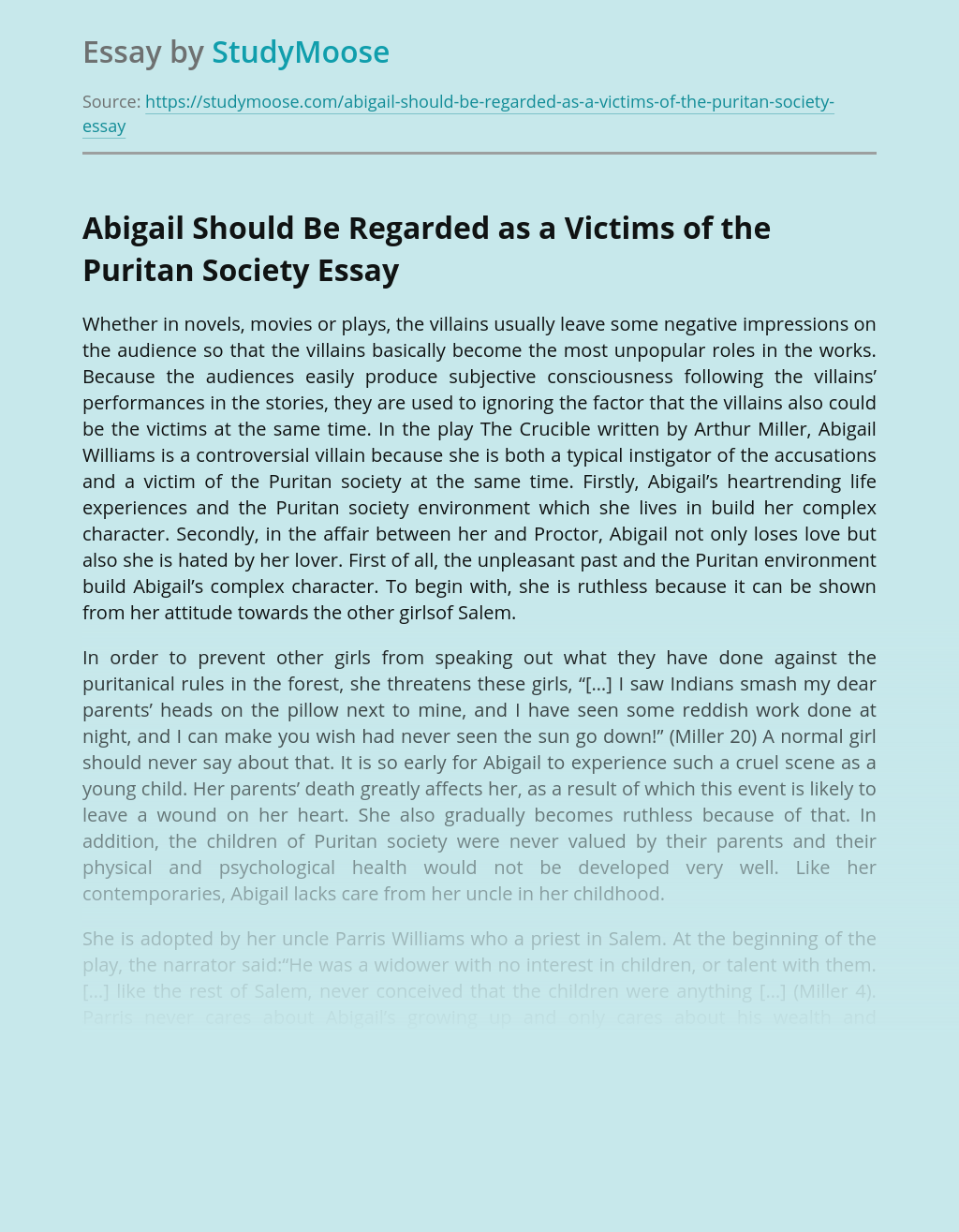