Abigail Williams In "The Crucible"

A discussion of the character of Abigail Williams in Arthur Miller’s “The Crucible”.

In Arthur Miller’s The Crucible, there is one character who, because of her selfish and evil ways, causes the destruction of many people in the town of Salem. This character is Abigail Williams. In the play, jealousy, and self- interest are the two characteristics that are seen constantly throughout the play. These characteristics pertain particularly to Abigail, and give a graphic description of her life, and how she deals with things in it.

Don't use plagiarized sources. Get your custom essay on
“ Abigail Williams In “The Crucible” ”
Get custom paper
NEW! smart matching with writer

Throughout the play she gets worse and worse each time something major happens. After her affair and failure with voodoo, she was overcome by love and jealousy, and she was willing to do anything to get John back to her own self.

Since she was overcome, she had no concern with morals, and starts to sin heavily by starting the witch trials, which causes the deaths of many people in the town. Abigail doesn’t want anyone to find out that she was in the forest so she harshly threatens Betty Paris and Mary Warren not to say anything.

“Let either of you breathe a word, or the edge of a word, about the other things, and I will come to you in the black of some terrible night and I will bring a pointy reckoning that will shudder you… And you know I can do it… I can make you wish you had never seen the sun go down.” She fell in love with John Proctor after their affair, her morals and her whole life began to fall apart.

She started to be overcome with her feelings of love, and her passion for John was enormous.

After she was denied these things she could no longer control herself, and her whole reason for living became to get back John. This shows that when a person is given something, which they enjoy, and even love, and they are denied it, they feel distraught and they will many times do almost anything to get it back. She was very desperate and she felt willing to do anything to get back John for herself. She had been brought up to believe that magic worked, so she turned to Tituba and her voodoo. Abigail begged her for her help in that matter, This is shown when Tituba says, “You beg me to conjure! She beg me to make charm-” Abigail was so desperate to get back John that she even drank chicken’s blood to get him back. She drank this blood charm so Elizabeth would die. Abigail’s progression of evilness and her looking for help from witchcraft shows that love and jealousy in large quantities can cause a person to go to what they hate most for help.

Abigail goes from her goodness with internal turmoil, to what she was brought up in Salem to fear, and despise: witchcraft. After some thought Abigail realizes that she can use witchcraft to get back John, though not in the way that she had thought before. She believes that the only reason that John is not giving in to her is because of Elizabeth. She realizes that the people of the town are so afraid of the devil, she can use that fear to discredit, and eventually get rid of Elizabeth, thereby getting John for herself. She also realizes that if she right away accuses Elizabeth, the people would not believe her because Elizabeth is too pious. She decides that if she starts with evil people, and works her way up to the more pious ones to, finally, Elizabeth she will be believed.

This chain of reasoning causes the deaths of many of the townspeople in Salem. Many people in the town of Salem think Abigail’s doing the right thing by accusing all these people. They don’t know of Abigail’s scheme and encourages that these witches be given their due punishment. Reverend Hale has a conflict with Abigail’s doings but not for the same reason as John Proctor. Hale knows that Abigail is purging and he really tries to prevent innocent lives being wasted. John wants to stop Abigail so he can save his wife. Hale wants to save innocent lives from being unreasonably killed. Hale is a great man who tries to save lives but John was the opposite and is selfish by just caring about his wife’s life.

At the end of the play, however, John realizes his selfishness and dies while saving his honesty. Abigail’s actions show that once a person begins to do evil things, and sins, it becomes almost second nature, and they don’t really mind it so much. In time they even don’t care at all, and they may even continue to do sins just for the fun of it. This is shown when Abigail continues to sin, and continues the witch trials even after she realizes that the plan she hatched to kill Elizabeth didn’t work, and she had not planned to have her love, John, killed. From Abigail’s actions we learn that a person shouldn’t base their whole life on one love or a feeling of jealousy. If they do they can change their whole life for the far worse. For example, Abigail started to become a complete villain and the whole course of everyone’s life in Salem was changed for the worse or terminated all together because of her selfishness. We should all learn to not hook onto any one individual because there are many other fish in the sea. Besides the fact that it can ruin your life on a personal level it can ruin many of the people that you deal with on a everyday basis.

Abigail Williams In "The Crucible". (2020, Jun 01). Retrieved from https://studymoose.com/abigail-williams-in-the-crucible-essay 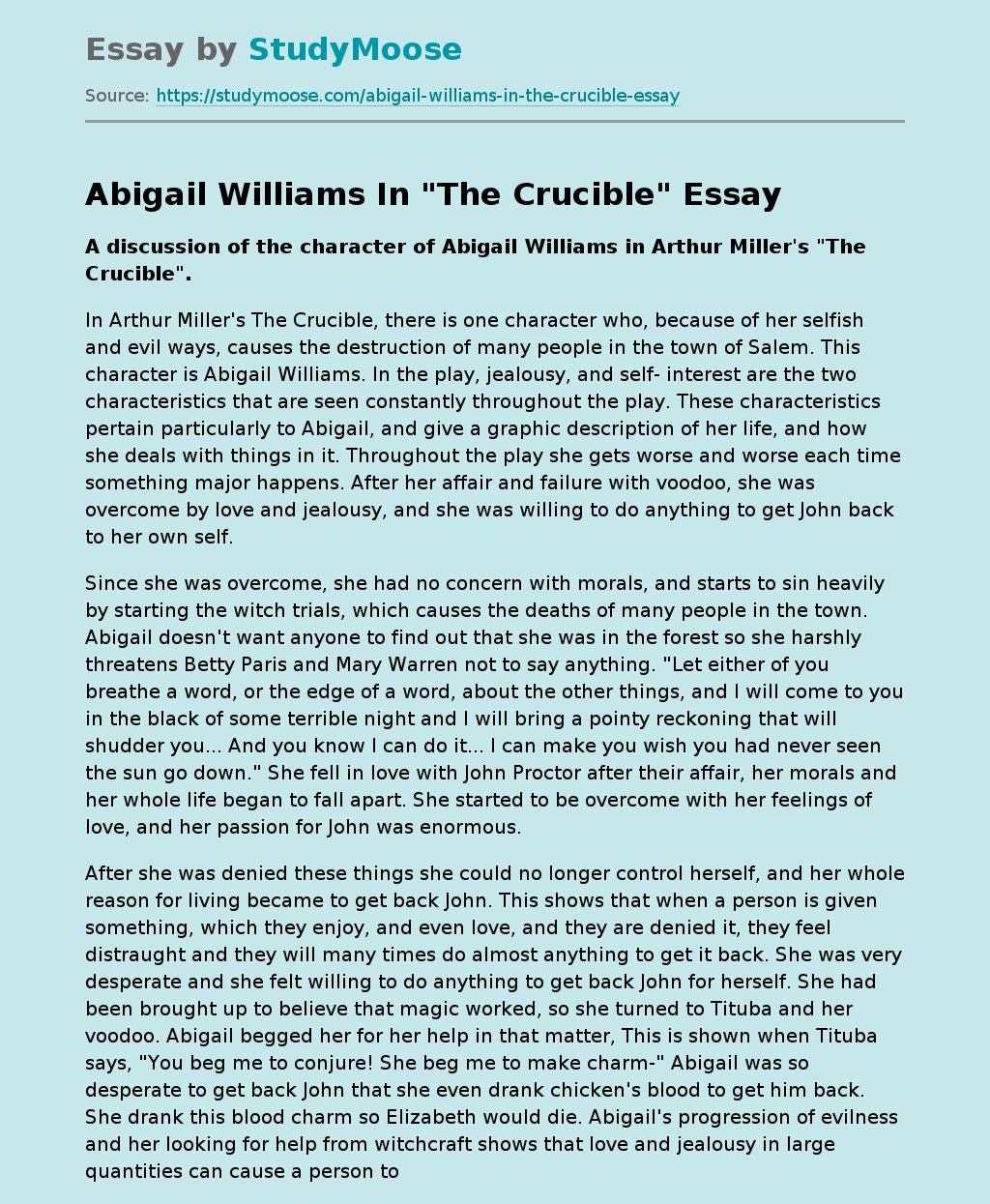