Conflict is a destructive force in our lives

What is the real explanation of conflict? A struggle or destructive force.” This description of conflict only scrapes the surface of what it really means. People encounter these conflicts almost on a daily basis, whether it being self inflicting conflict, conflict with scheduling religions, age, sex, family, friends or even the experience of a war. Conflict is an unavoidable force; we will all face conflict in one form or another throughout our lives. How we deal with conflict determines whether it destroys us or not.

Don't use plagiarized sources.
Get Your Custom Essay on Conflict is a destructive force in our lives Just from $13,9/Page

Conflict, as a force can either crush or strengthen people depending on how they deal with it, it’s known to bring trauma and devastation but has also proven to bring people together and has created a unity that goes down in history. Conflict in any form can prove to be rather distressful and brutal, either for the individual or towards two or more parties. Conflict is a destructive force as it generates segregation as a result of contrasting ideas and opinions between different people or societies.

When individuals are set against social orders or groups of people, there is a tendency for the bonds of trust and the fabric of togetherness to be damaged. Jewish people for instance, were forced by decree or by informal pressure, to live in highly segregated ghettos and shelters in the time of Adolf Hitler. The forced segregation of Jews spread throughout Europe during the 14th and 15th centuries and at this time the papacy required Jews to segregate themselves from Christians and to wear distinctive clothing. In the middle of the 19th century, it was stated that Jews were obliged to live in a separate part of town for they were considered as unclean creatures. It is due to conflict that issues of segregation can occur which has proven to be a destructive force to the masses and has brought on severe devastation in peoples everyday lives.

A war in itself is one of the most traumatic aspects of conflict that any human being or society can encounter throughout a lifetime. War is undoubtedly the struggle for survival. War shifts and destroys whole communities and economies, making it difficult for survival. Nothing can prepare one for the intense violence, death and confusion of war, nor the inflicting hardships it continues to bring on well after it is over. The morning of August 6, 1945 in Hiroshima, Japan did not begin in any exceptional way; in fact, the people had no idea that they were about to be part of one of the most significant mornings in all of history. At 8:15 am, the United States Army Air Forces dropped the first atomic bomb. The bombings brought about very painful physical effects that crippled the nation of Japan for many years. It was said that after the bombings, any humans that survived the initial blast were suffering from radiation exposure. One of the most tragic consequences was the damage done to Hiroshima’s families.

In 2005 there were 6,500 orphans in the city of Hiroshima following the bombing. Alone in the world with no one to care for them, these children faced a terrifying plight, in a city that was left in ruins. While some found their way safely through this world, many more were forced to live a life of crime in order to survive or were even less lucky and lost the battle to sickness or suicide. Such extreme anxiety is completely imaginable when one looks at all the things that the Japanese people were forced to face almost instantaneously. War affects society in a way that is painful and the theme of alienation is truly the most deeply felt when the impact of war strikes. Such an atomic explosion almost completely destroyed Hiroshima’s identity as a city and led its own citizens to live a life of fear and perpetuating self-inflicting, physical and cultural problems.

It is in all rationale to state that conflict is a destructive force in many different forms; however, there is also a firm sense of salvation that lies within conflict. Conflict along with the traumatising destruction it brings, can progress into experiences with positive outcomes. If we consider, the tragedy of September 11, the whole world stopped and watched the unfolding footage of the world’s two most prominent buildings fall to dust together with thousands of innocent lives. There was a new impression of community where people from all backgrounds were coming together, united for the good of their country and its people. There didn’t appear to be any distinction between black and white, rich and poor, or fire-fighter and stockbroker, as there had always been in the past. When disaster struck, relationships with family and friends were the priorities.

Adding to this, volunteers, police officers and fire-fighters, surgeons reinforced the fact that every life is really sacred. The tragedy reinforced the belief that pain is the greatest personal architect of all time. September 11th, is now a part of American history, it unleashed the problems that were hidden inside people for fear of rules and society and brought out the compassion that was lost in small differences of everyday life. This event reminds us how a tragedy, despite its consequences can in fact unite a nation with the world, this event showed America that they should still believe in their own country no matter what type of obstacles come in their paths. Conflict is known to be a powerful destructive force in people’s lives. As can be seen, the Jews as well as the Hiroshima War both prove to present cases of extreme trauma and devastation as a result of conflict, the Jew issues resulting from political views and Hiroshima a war itself, caused a loss of too many lives. On the contrary, such conflict has also created a sense of understanding and willingness as people from America during the time of the September 11 came all together from all backgrounds to work together and restore their lives and the future of their own country.

Conflict is a destructive force in our lives. (2016, Mar 28). Retrieved from https://studymoose.com/conflict-is-a-destructive-force-in-our-lives-essay 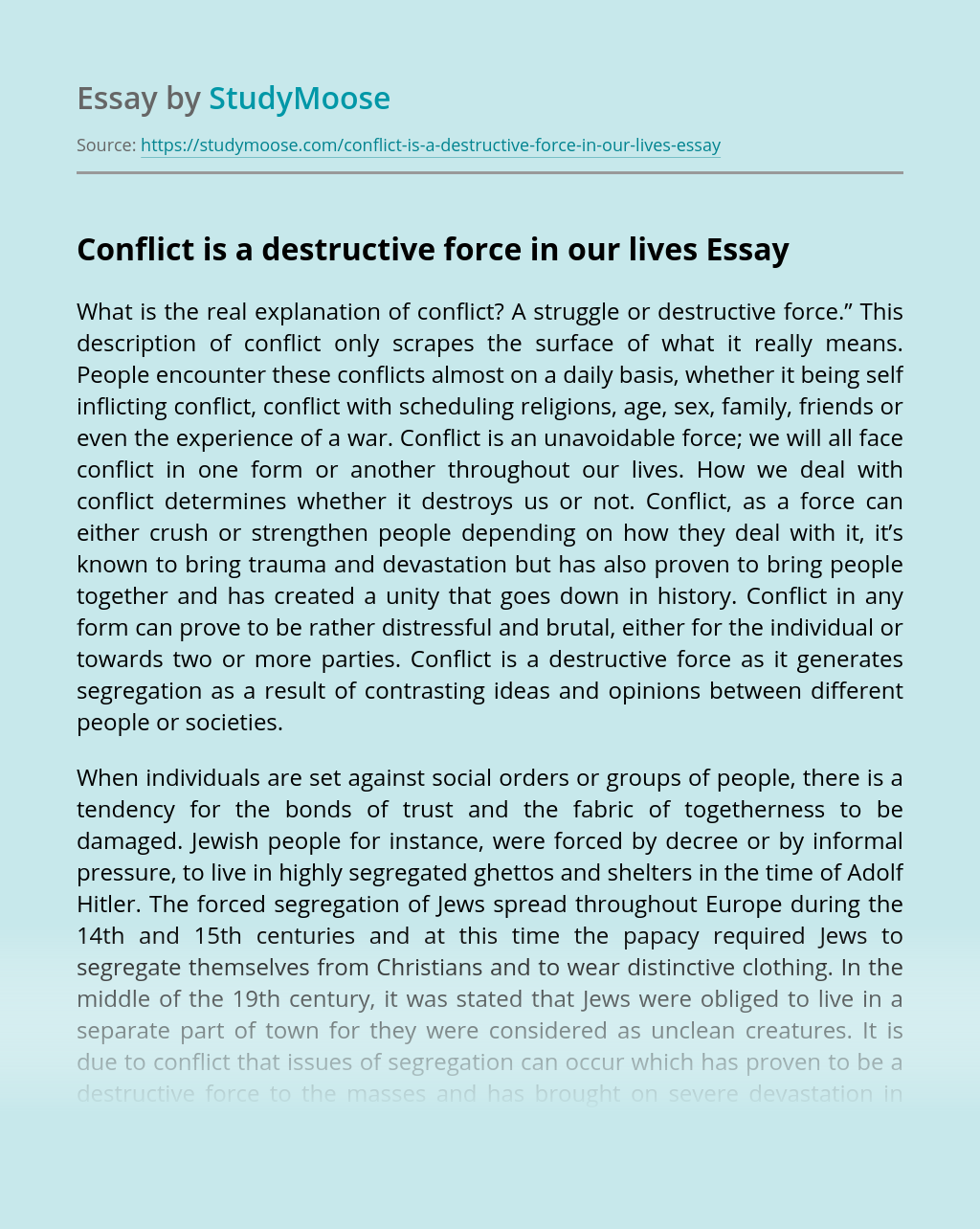 Get Essay
Benefit and compensation system of Google

Google Inc. is an American international organization that provides internet related products and services. Cloud computing, advertising technologies, and their search engine are among the most popular services that they offer. Google recently ranked 46th on the 2014 Fortune 500 companies and 1st on Fortune 500’s best places to work for. Google was founded in...

I have dependably been flabbergasted how inventive promoting

I have dependably been flabbergasted how inventive promoting can transform any customary item into an outstanding bleeding edge adventure. Having done my Undergrad in Marketing and interchanges, I have seen the quality and inventiveness of item advertising characterize the achievement of an item in the market. My transient objective is to exceed expectations in a...

Antigone and Creon, from “Antigone” by Sophocles, experience a philosophical war based on their moral views. A dispute developed when the concepts that backed up their actions disagreed with each other. Antigone’s side of the dispute held a gods’ law is the method approach, rather than the “I am king” technique Creon chose to follow....