I believe that William Butler Yeats shows while desire is a destructive force, human experience will never be reached without it. This memorable idea has been influenced by the principles of Romanticism and is most evident in the poetic techniques used in “The Wild Swans at Coole”, “The Second Coming” and “Leda and the Swan”.

William Butler Yeats was deeply troubled by the Anglo-Irish conflict and influenced by the principles of Romanticism, and I believe that it is these concerns shape the memorable idea that while desire is a destructive force, human experience will never be reached with it.

Don't use plagiarized sources. Get your custom essay on
“ William Butler Yeats ”
Get custom paper
NEW! smart matching with writer

“The Wild Swans at Coole”, “The Second Coming” and “Leda and the Swan”, all explore Modern anxieties about the state of the contemporary world through the use of poetic techniques.

The highly structured and rhyming nature of the Victorian style

“The Wild Swans at Coole” adheres to the highly structured and rhyming nature of the Victorian style which Yeats commonly employs, rejecting the modernistic styles of his time.

Referring to Yeats’ Book A Vision, Yeats’ refers to desire as ‘ the image of what we wish to become.’ In this poem Yeats’ reflects upon his romantic conquests and dreams from the viewpoint of an ageing man, about the desire for things that he wanted, but, in most cases, they were things he could never have.

Yeats begins his poem with images of nature that are clearly inspired by earlier Romantic poets. He uses symbolism in choosing Autumn, the season of change as the context for his vision of the swans, ‘the tress are in their autumn beauty,’ to highlight that he too is in the ‘autumn’ of his life.

The transformation that the swans inspire however, is spiritual rather than physical one.Yeats uses the technique of the active verb ‘mirrors’ in, ‘the water mirrors the still sky,’ to highlight a sense of interconnectedness between the earth and the sky. In particular through the verb, he emphasises that nature has the capacity to facilitate a union between that which is physical and that which is other worldly, a viewed shared by the Romantic poets Blake and Shelley in whom Yeats was well versed.

In the poem Yeats’ persona occupies the earthly realm, while the swans have the capacity to exist in both the physical and celestial spheres. James Lovic Allen in the Unity of Archetype and Religious Imagery sees this as representing ‘the union of man and God, the human and the divine. Nature, in the symbolic form of the swan, a key technique in Yeats’ poetry, becomes the means by which man can find some purpose in his life, namely a connection with Lovic’s ‘divine’, ‘…upon the brimming water/Are nine and fifty swans…/All suddenly mount…’

The symbolism in Yeats’ poems

I think that Yeats’ swans in his early poetry certainly symbolised Maud and his relationship with her, as many critics assert, reflects Yeats’ sexual desire to live and his rejection of the death instinct, as the rings can symbolise an immortality we cannot achieve.

“The Second Coming”, reflects a prevailing view in twentieth century Europe that the world was descending into a state of anarchy and destruction. Yeats reveals his own concerns, stemming from the unremitting violence of World War 1, revolution and unrest in Europe and civil war within his own country.

This transition from one era to another, according to Yeats is to prove destructive as evident in the poem’s subsequent images. Yeats uses the symbol of a falconer to emphasise that the modern world is spinning out of control in, ‘The falcon cannot hear the falconer’. The falcon symbolically represents civil control,exerted over the falcon which is civilisation itself. the effect of this is to heighten the sense that the twentieth century world, with its widespread political unrest is collapsing inwardly. In these images we can clearly see Modernist fears about the self destructive state of the world.

R.F. Foster states, “The second coming: Ireland still lives in the shadow of W B Yeats. At times, the shadow darkens and changes its shape, but it is never absent, because his search for freedom and soaring autonomy makes him our contemporary.” To Yeats, a war that is violent just for the sake of selfish desires will have no effect on the greater good for Ireland and will just destroy what greatness Ireland has left . I believe that it was Yeats’ hope that, through his poetry, the human race would one day cleanse themselves of objective desire in order to stop the violence and hate in this world.Yeats lists a series of images of destruction that follow in the wake of his loss of control. The absence of conjunctions in the first verse as a whole, as evident in, ‘things fall apart; the centre cannot hold; mere anarchy is loosed upon the world.’ This suggests that the events follow cumulatively,layering the evidence of anarchy to emphasise its inevitability. The word choice of ‘centre’ alludes to the gyres,in particular the widening which precedes the ending of an era and links here to Yeats’ foreshadowing on an end to the contemporary world.

The relationship between revolutionary change and knowledge

Yeats’ highlights, often objective, desires ruin the human soul while ambitions for the growth of oneself and the greater good of mankind is what we should all be trying to achieve.

Written in 1923, “Leda and the Swan” examines the relationship between revolutionary change and knowledge, and articulates a momentary nationalitarian vision of Irish cultural unity. The poem dramatises one such annunciation, the rape of Leda and subsequent birth of Helen marking, accruing to Yeats system, the foundation of the Greek age.

According to Kiberd, who’s, unlike the majority of Yeats critics, examines the poem through the lens of postcolonial theory, and “leads to the possibility of interpreting the swan as the invading English occupier and the girl as a ravished Ireland.”

This suggest that the swans desire to take over Leda, leads to destruction such as the destruction seen in Ireland. This reflects my interpretation as i believe that Yeats’ had to lose the beloved Leda to gain the desire that sustains Yeats’ poetry. And although the poem often protest the loss of the beloved, it also betrays an awareness that this loss creates the space of desire that engenders them.

The opening line, “A sudden blow: the great wings beating still.” reflects the violence of this sexual attack. Leda is violated and she is privilege with the glimpse of the godly perspective. If we identify with Leda we feel pinned. We can feel the tension between terror and violence on the one hand and yielding swoon on the other. Some critics say that Leda is swept away by passion as that she moves from terror of the unknown to passionate acceptance, but the use of rhetorical questions, ‘how can…’ she push him away? and ‘how can body’ help feel the strange heart’, show her as a victim without choice and that the desire of the swan led to the rape of Leda. There is sympathy here and a feeling of awe as the staggering girl is swept up by ‘the feathered glory.’ We are aware of her violation as well as the strange knowledge she may have felt. The broken wall and burring roof suggest the war torn city of Troy. The towers destruction indicates the collapse of a civilisation, and while desire is a destructive force, human potential will never be reached without it.

Yeats’ “The Wild Swans at Coole”, “The Second Coming” and “Leda and the Swan” use the techniques of poetry to explore, albeit in different ways and with different focuses, the memorable idea while desire is a destructive force, human potential will never be reached without it. 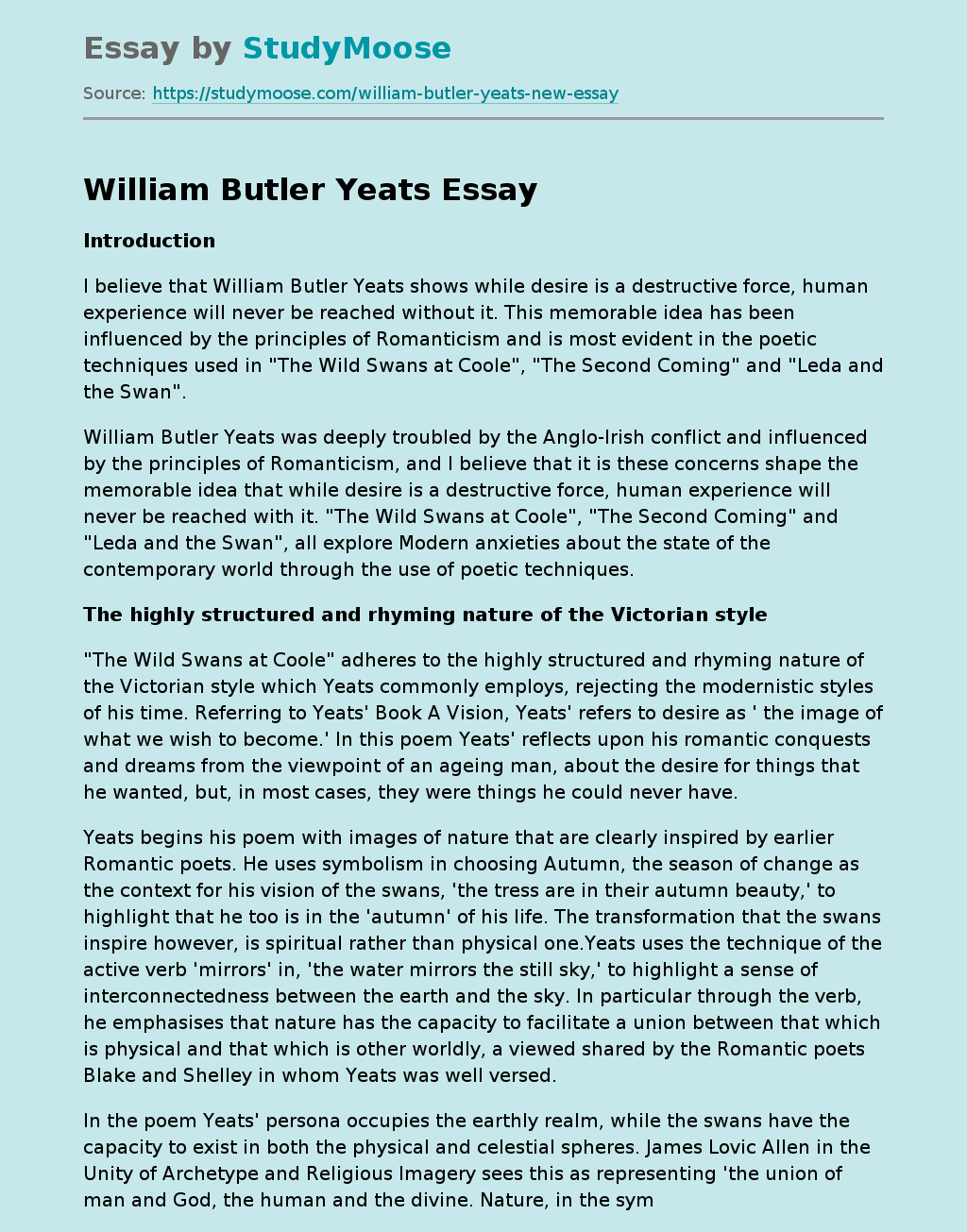