The fantasy like short story “The rocking horse winner,” is about a young boy who believes that if he has more money he will be more loved by his mother. The author, D.H. Lawrence develops a theme throughout the story that money and social status can be a destructive force. The story is about a young boy named Paul who is gifted a rocking horse that seems to have super natural powers. Paul begins to take on these supernatural powers which allow him to commute with his rocking horse.

Don't use plagiarized sources. Get your custom essay on
“ The Rocking Horse Winner by D.H. Lawrence ”
Get custom paper
NEW! smart matching with writer

Paul realizes that he can communicate the winners of local horse races through the rocking horse and begins to use it to gamble for money and his mother’s affection. However, as Paul becomes more obsessed with winning money and affection he falls ill and in the end Paul tries too hard to win his mother’s love and dies. The relationships which result in conflict are between Paul’s mother and father, between mother and Paul, Oscar and Paul and Paul and himself.

Thus, the theme is revealed by the use of relationships, and symbolism which in the end leads Paul to his death.

D.H. Lawrence accomplishes the theme by using dramatic relationships with the characters. Paul’s mother, Hester is determined to fit in with society but she does not notice that her desires for materialist things are ruining her family. This becomes very apparent in a conversation Paul has with his mother on a shopping trip.

Hester gives her son ill advice when she makes him believe that being lucky is the key to becoming rich. At the time Hester doesn’t know that this advice will have a fatal conscience on her son. Paul shows he is determined to have his mother’s attention when he says “I’m a lucky person”. It isn’t until Paul’s death does his mother realized that her greed and desire for materialist things leaves the mother longing to have her son back. It is then that she realizes her superficial ways is what caused the death of her son.

Throughout this story there are many uses of symbolism. The use of symbolism is important in revealing the theme to this short story. The biggest use of symbolism is the wooden rocking horse, with its supernatural power and Paul’s determination to use it to find out the winning race horses. Paul is determined to achieve social status and money by finding the winners, as an example he says “now, take me to where there is luck!” However, the rocking horse ends up taking Paul’s life. The whispering in the house symbolizes the desire to please his mother so that the family can stay in the social class that they are accustomed to. It is the need of the mother, Hester, to have the best things in order to keep their stature. “There was never enough money,” which Paul can hear through whispers in the house which lead him to find a way to please his mother and in the end the restless pursuit of money caused his death. The symbolism unrolls the theme by Paul’s wooden rocking horse, his wild eyes and the whispering within the house

In summary, the desire for money and social status on the part of Paul’s mother, Hester, ends up in taking Pau’s life. The author, D.H. Lawrence reveals the theme exceedingly well through the use of relations between the engraved characters and the symbolic inferences. Paul in the end receives the attention and love which he longs for, but unfortunately his mother realizes this too late. The author in the end succeeds in revealing the theme which makes this a well-developed short story about morals. 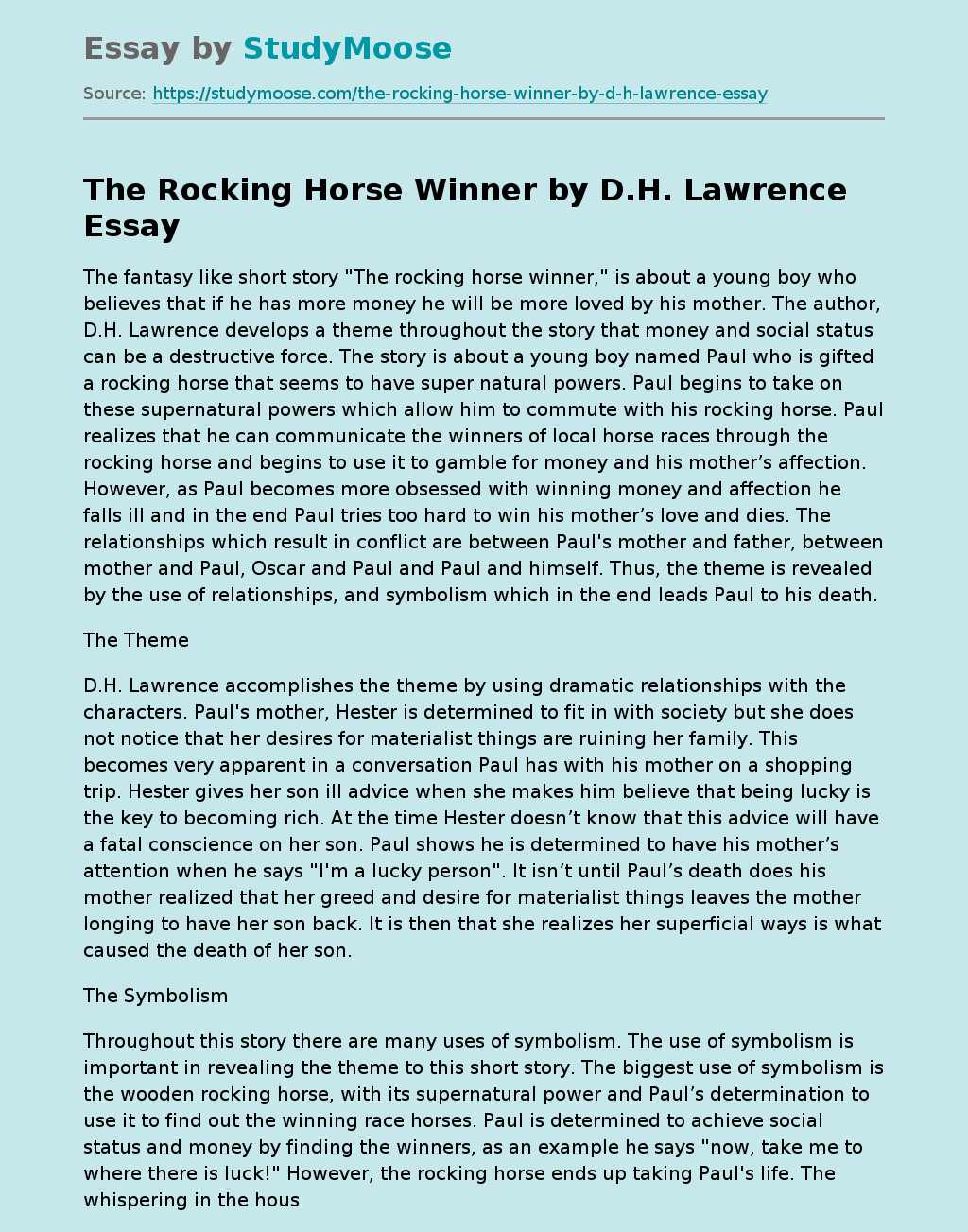