People in life who are unware of how they affect others, brings out their struggle with ignorance. This ignorance can hit every aspect of their life. In the short story by D. H. Lawrence, “The Rocking-Horse Winner”, a young boy named Paul encounters a rough lifestyle due to fact that nothing is ever good enough for his dear mother, Hester. He takes the burden on himself, and tries to reclaim everything that his mother desperately longs for. As young as Paul is, he takes a huge responsibility in resolving the financial burden of his family.

Don't use plagiarized sources. Get your custom essay on
“ The Rocking-Horse Winner By D. H. Lawrence ”
Get custom paper
NEW! smart matching with writer

Paul is a crucial character element to the plot and this relationship between the two helps the story unfold. The relationship between Paul and his mother is very unusual compared to your average mother son connection. Being an innocent child, Paul feels that his mother just doesn’t have the luck in life to be happy. From his point of view he felt that the way to get to happiness for himself and his family was to provide monetary materialistic pleasure.

Thus ultimately leading to his epic journey for contentment. Hester, Paul’s mother, doesn’t recognize how much of an influence she is on her son’s life. Even though her actions of bad parenting habits and lack of a self-filter, she doesn’t realize that her outlook on life is critically affecting her child’s livelihood. She has a rare way of seeing things, belief in that luck is what brings you money and that without that it you won’t be prosperous.

The reasoning behind this is that Paul is constantly hearing the phrase “There must be more money”, whispering throughout the house. Between the whispering and his mother, Paul witnessing actions of this sort pretty much corrupt himself by the end. Paul has many interactions between himself and the family gardener named Basset on the topic of horseracing. Basset is a veteran at placing bets on horses and he loves it. Paul and Basset come to be great friends when, Paul finds that he is able to come up with the winner of the upcoming derby. Using this to his advantage, Paul enlists the help of Basset to help himself to start winning money. Uncle Oscar gets word of the betting and wants in on the partnership, which is great because Paul finds Uncle Oscar lucky. These interactions between these three characters help secure Paul with a small fortune. Even though Basset and Uncle Oscar never forced him to come up with the winning horse, there were consequences that could not be foreseen. Paul rode his rocking horse hard and put lots of effort into it, sometimes hours upon the horse. Keeping in mind that the reason he did this was to please his mother with a monetary gain. Sadly before a big derby, Hester finds Paul thrashing upon his rocking horse, falling off in a heap.

He yells out the winning horses name “Malabar” and becomes unconscious. Paul unknowingly took his life for the sake of his messed up mothers eternity. The setting in this particular short story was fairly stagnant. The majority of the time, the setting was at the family’s house in England. Then, a small segment was at a horse race in which Uncle Oscar took Paul to. Setting was relevant to the character Paul, because it mainly revolved around what he was doing. For example, he is the one that wants to provide for the family, so the story follows him and his journey.

An important element to “The Rocking-Horse Winner” is the relationship between the character and how the plot is patterned. The plot is set up in order of sequence of events, Lawrence wrote to where he could follow the thoughts and actions of Paul through a third person point of view. For instance, Paul realizes he can get money for his financial burdened family through the horse races. So in turn, he starts riding his rocking horse for the major derby’s coming up. The author D.H. Lawrence establishes character to bring out the conflict and resolution into the story.

Conflict is brought upon the main character, Paul by his mother relating to the fact that the family does not have enough money for what they desire. Her desire for more financial wealth lies at core of all the conflict that happens in the story itself. Paul is the one that is trying to resolve this issue by using his special power of prediction. This story as a whole is a closed plot. Paul eventually ends up dying at the end with his final hurrah of “Malabar”, making the story have a definite ending. Personally I am satisfied with the way the story ended. It went out with a bang and it’s nice to not be puzzled on how the story could end that way.

I am though interested in how the family would survive without not only Paul but the huge money supply he left the family. Wealth is one thing people can go crazy over. Hester is a great example of how ignorance can ruin someone’s life and even majorly affect other people around. Paul was just doing what he thought was morally correct to help his mother and the family. He did his deed without them knowing and never got any appreciation. This unappreciated hero helped give plot to the story and life to the characters.

The Rocking-Horse Winner By D. H. Lawrence. (2016, May 08). Retrieved from https://studymoose.com/analysis-rocking-horse-winner-essay 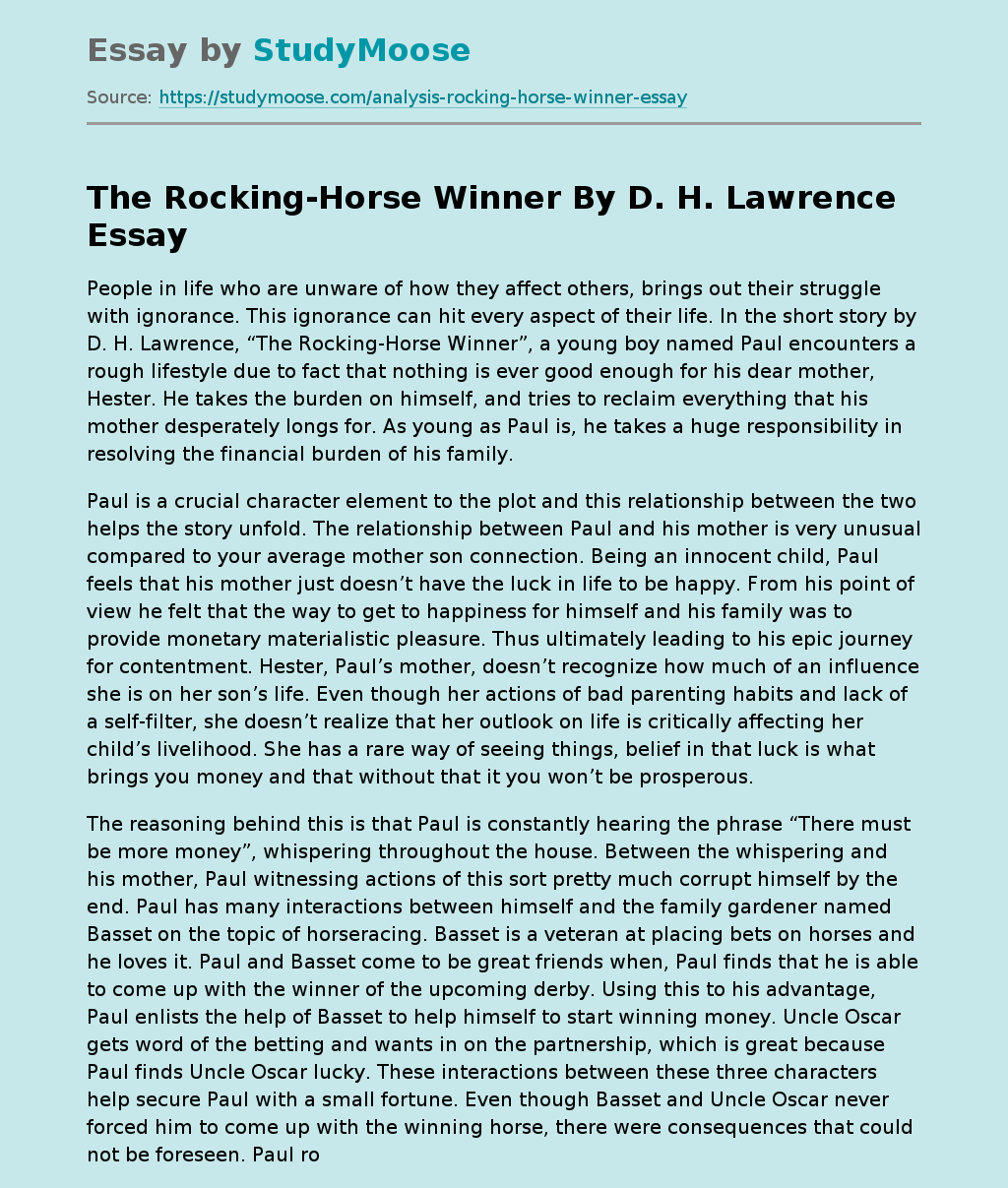