’Cosi demonstrates that most of our attitudes to mental illness are based in ignorance.’ Do you agree?

The play Cosi, written by Louis Nowra, supports the assumption that certain members of society find it hard to deal with mentally ill people . Through Cosi, Nowra criticise the members of society who believe that institutions are the best place for people who have developed or have been born with some form of mental illness. The play explores the lack of understanding people had on mental illness during the “anti – psychiatry” movement that occurred in the same period as the war.

Don't use plagiarized sources. Get your custom essay on
“ ’Cosi demonstrates that most of our attitudes to mental illness are based in ignorance.’ Do you agree? ”
Get custom paper
NEW! smart matching with writer

The play also makes it clear to audience that some considered there to be a division in society, as certain members had developed an “us and them “mentality between the “sane” and the supposedly “insane”. On the other hand, Cosi also aims to demonstrate the knowledge that can be gained when people approach the illness with an open mind and take the time to get to know the patients. As this could would give them a clearly understanding of the mentally ill and be more accepting of them, to recognise that we are all human.

Cosi portrays the sense he confusion and lack of knowledge people had towards mentally ill patients. This is clearly shown through the character Justin. As a social worker it was his job to care for the mentally ill. However, even he was unsure on what exactly he should be doing to treat the patients or how he should interact with them. Due to an absence of knowledge in the patients “extraordinary” personality he did not have a very consistent approach to dealing with them.

Therefore, Justin continuously set up little “projects “for the patients in order to “keep them interested”.

Justin’s ignorance and neglect towards mental illness is further made clear when some simplistic pointers on how to deal with the patients. He attempts to build Lewis’s confidence by stating that “ as long as they are taking their medication” everything should be fine and if things do get out of hands “ they’ll just act a bit extraordinary, that’s all”. However, Justin definition of extraordinary is never made clear to the audience or Lewis as clearly some patients can become quite dangerous, such as Doug who attempts to set the theatres on fire twice risking the lives of all the cast members.

In addition, Nowra also aims to make the audience aware of the unsatisfying and quite depressing lives lead by the institutionalised characters. The injustices and inconsistencies of the mental health system are highlighted by the closed wards and strong medications received by the patients. This is clearly evident is patients such as Zac. At the beginning of the play he characterised as being quite illogical and dopey but as the play progresses it is made evident to the audience that he is in-fact very intelligent.

This clearly demonstrates attitudes of ignorance towards the mentally ill because Zac actually has a drug addiction and not an illness. Therefore instead of the institution trying to help him overcome his addiction they are just catering for his deadly habit. Nowra’s comic play portrays a range of dilemmas in the treatment of mental illness and certain necessary extremes that were The Play makes it clear that an “us and them” mentality has be created by the “sane” members of society to categories them as different to the “insane”.

Nowra makes it clear that society sees particular kinds of “differences” in others as threatening and therefore in order to cope with this fear they label the individual. University educated characters, Nick and Lucy, share this same mentality as they are both insensitive towards the patients, labelling them and treating them as “crazy” people. Nick shows no shame, as he openly signs “they are coming to take me away, ha, ha, to the funny farm” whilst in hearing distance of the patients.

This makes it clear that he sees himself above the patients and therefore shows them no respect. Additionally he begins to show the same lack of respect to Lewis when he chooses the patients over Nick. This is evident when he proceeds to call Lewis a “nut” and tries to offend him by stating “you (he) belongs here”, insinuating that he too should be institutionalised and separated from the rest of society. Lucy also treats the patients as if they are classified as something much different from her when she tells Lewis that “working with these people has changed you (him)”.

The troubling that Nick and Lucy don’t understand is that most forms of mental illness are actually a disease and therefore patients such as Roy and Henry have little control over their actions. Lucy and Nick’s inability to see the patients as equals to themselves support Nowra’s assumption that the majority of society do not deem these people to be “normal” and therefore do not know how to interact with them. Nowra also makes it clear that through interaction with mentally ill patients we grow to understand them and eliminate certain misconceptions.

Lewis at the start of the play was just like Lucy and Nick; he followed their beliefs adopting them to be his own. He is reluctant to work with these “mad” patients, deeming the whole “project” to be “madness”. However, Lewis preservers with the play, stating he “needs the money” and in continuing he was slowly able to better understand the patients. As the play progresses, Lewis begins to get to know the patients on a deeper level and develops personal relationships with them, realizing that they are just “normal people who have done extraordinary things”.

Through interaction with the patients Lewis is able to breakdown the conception on how institutionalised characters are seen and therefore no longer fear them, as a result of his previous experience with “madness”. Lewis grow to feel comfortable around the patients telling Julie “my (his) grandmother went mad” and that in a way being in the asylum was testing him because “I (he) liked my (his grandmother” and recognises that “she had gone mad, she was still my (his) grandmother”.

This demonstrates Lewis ability to discard the primary attitudes of ignorance towards mental illness and instead understand that they are also humans who have “extraordinary “personalities. Lewis’s approach to dealing with the patients was learnt through actually interacting and levelling with the patients, rather than assuming what is best for the patients. Lewis discovers that through contribution “it makes them feel a part of the show”. Furthermore, make them feel as though they have some sort of power over their own lives.

Cosi, shows the audience that once people actually take the time to associate themselves with institutionalised patients they learn to see them beyond the illness and recognise their important values. Cosi was just another one of his projects that were aimed to occupy the patients, a way for him to try and fix them” Very close minded when attempting to “cure the ill. Understand all human, however the mentally ill are just people who have extraordinary thought’s and experiences.

’Cosi demonstrates that most of our attitudes to mental illness are based in ignorance.’ Do you agree?. (2020, Jun 01). Retrieved from https://studymoose.com/cosi-demonstrates-attitudes-mental-illness-based-ignorance-agree-new-essay 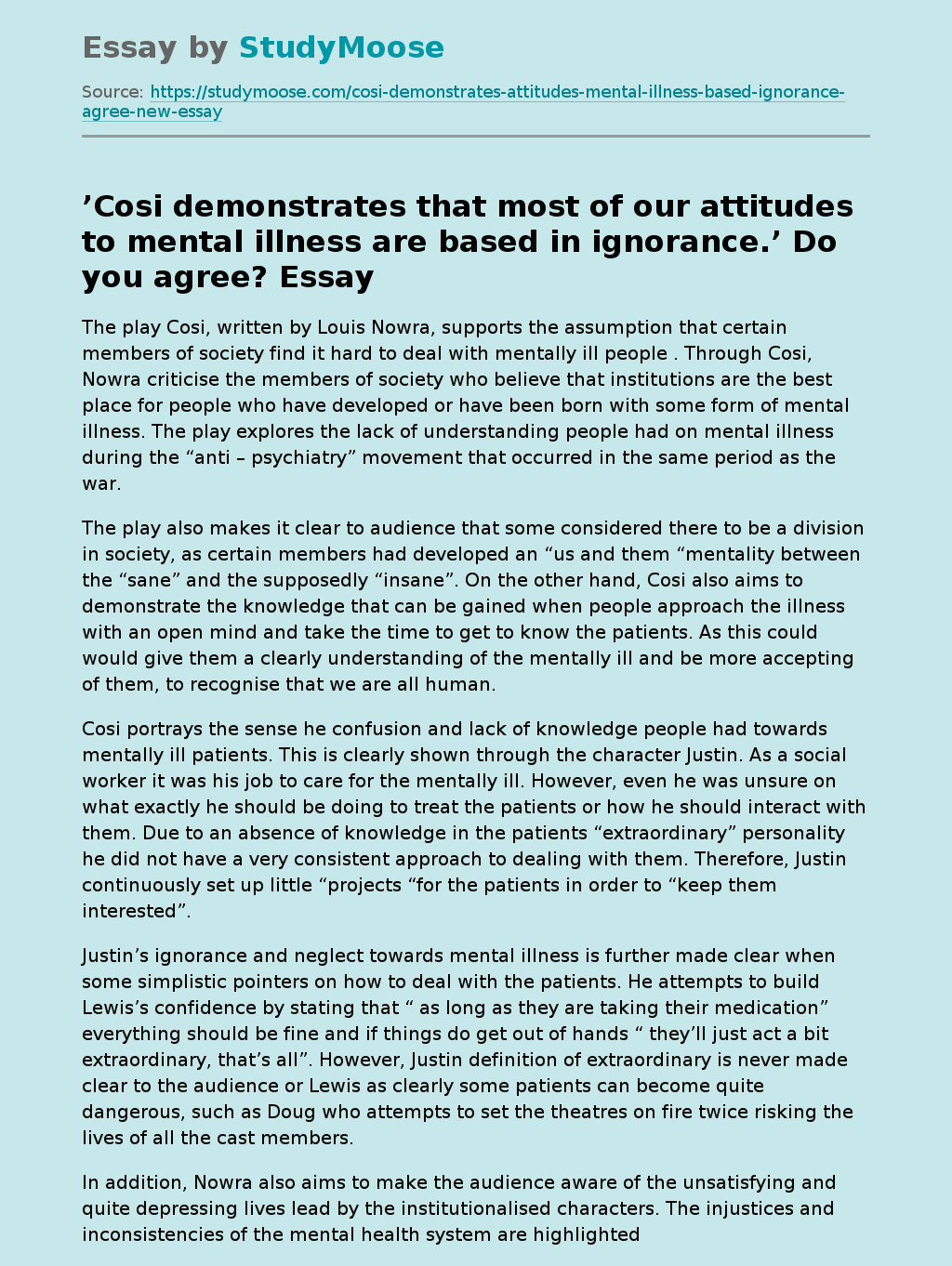