La Boit Theatre’s showcase of Cosi written by Louis Nowra and directed by David Berthold is an emotional play, talking of Love and fidelity. Self’s perception of other people; whether or not love is a strong enough reason to trust one another. Two excerpts centred on different themes will be analysed. This analysis will bring to light certain dramatic elements and viewpoints of time, body and space that Berthold has used to enhance the dramatic meaning of this production.

Turn in your highest-quality paper
Get a qualified writer to help you with
“ Cosi by Louis Nowra Dramatic Elements Analysis ”
Get high-quality paper
NEW! AI matching with writers

Cosi is set in Melbourne during the early 1970s. The play is about a young university student, Lewis (Benjamin Schostakowski) who is asked to direct a play for a mental asylum. Lewis becomes more involved in the play than he expected when he begins to build relationships with the patients. He is burdened by the strong opinions and expectations his peers have on love and fidelity. Louis Nowra includes dramatic techniques such as setting, humour, meta-theatre and symbolism to engross the audience into the world of Cosi while conveying certain themes.

Two of many contrasting themes within Cosi are love and fidelity.

According to Mozart’s Cosi Fan Tutte, the matter of fidelity is described to be a social standard that is never met. The notion of fidelity is touched upon regularly throughout ‘Cosi’. In particular, Act Two, Scene One, Lucy arrives at the institution to pick up Lewis, coincidently while Lewis has left the room. Lucy notices his script and begins to read it, finding it absurd that a man would ‘ruin [himself], for a worthless woman’, Lucy throws the script on the chair in disgust.

This physical gesture re-establishes her viewpoint on the treatment of women. Lewis enters the room surprised to see Lucy there. At this point the actors are positioned centred stage away from any prop, this spatial relationship and clear view line draws the audiences focus to them. Moreover, Berthold has only allowed for Lucy and Lewis to be present on stage at this time.

This choice of positioning creates an unembellished set, once again directing all attention to them. Lewis has let his newly established relationships with the patients influence his decision to not go with Lucy. As Lewis tells Lucy that he will be staying there and continuing with the production his replies become more to the point. Lewis’ unexpected firm tone contests Lucy’s strong, deep and borderline intimidating line delivery. This combined with their close proximity creates a rise in dramatic tension of relationship. As Lewis starts to question Lucy about nick, pointing out that she’s ‘seeing a lot of someone [she doesn’t] like’ he notices a change in her stance. The focus is directed towards Lucy as she changes her posture, putting her hands on her hips and avoiding eye contact. This change in body language suggests that Lucy is hiding something.

Lewis and Lucy both pause and look at each other. This contrast in vocal level assists the audience to suspect a rise in dramatic tension. Given the previous example, Berthold was able to produce a scene of true suspense and tension through the use of different viewpoints and vocal delivery. The contrasting theme shown throughout Cosi is the theme of Love. For example, Act One, Scene Three, the musical is at risk of being shut down because Doug had set fire to the toilets. Justin, the man who organised for Lewis to be there was about to cancel the musical. As the dramatic tension begins to build, Justin threatens Doug saying that he’ll send him back to the closed ward. Cherry interrupts Justin, yelling that the fire was her fault. The director through use of Viewpoints has allowed Cherry to have a kinaesthetic response with her line. This is achieved by her child-like gesture of raising her hand as she spoke. With the given circumstances it was made clear that the fire was not Cherry’s fault.

Love is the reason she lied. Her time with Lewis would no longer exist if the musical were cancelled. The relationships these characters have established with each other have affected the way they’ve made their decisions. For Example, Cherry has shown her love for Lewis by sharing her food with him and sending him love letters. This profound affection for Lewis caused her to take the blame for the fire. If Justin believed it was Doug he would’ve shut down the musical, meaning that Cherry wouldn’t be able to see Lewis again. Shortly after, Henry goes to speak up pointing out that Cherry is lying. Roy realises the delicacy of the situation, leading him to hit Henry, shutting him up. This is shown through Roy’s facial expressions and physical gestures. At this point Justin, Lewis, Doug and Cherry are all positioned Stage Left creating a circle-like formation.

Berthold has placed them like this to direct the audiences’ concentration to one place rather than scatter the energy through the entire set. By manipulating the use of vocal delivery and positioning Berthold has been able to highlight the important aspects of this scene. The evidence previously given supports the fact that David Berthold has indeed created a thought provoking theatrical piece. Love and Fidelity are two contrasting themes shown throughout Cosi. The struggle and fight to hold onto the notion of fidelity is contrasted with their perception of love. These two distinct themes are why Cosi is seen as such an emotional and relevant play. Thus in summary, through Berthold’s manipulation of certain dramatic elements and viewpoints the delivery and message of Louis Nowra’s Cosi was more than exceptional. 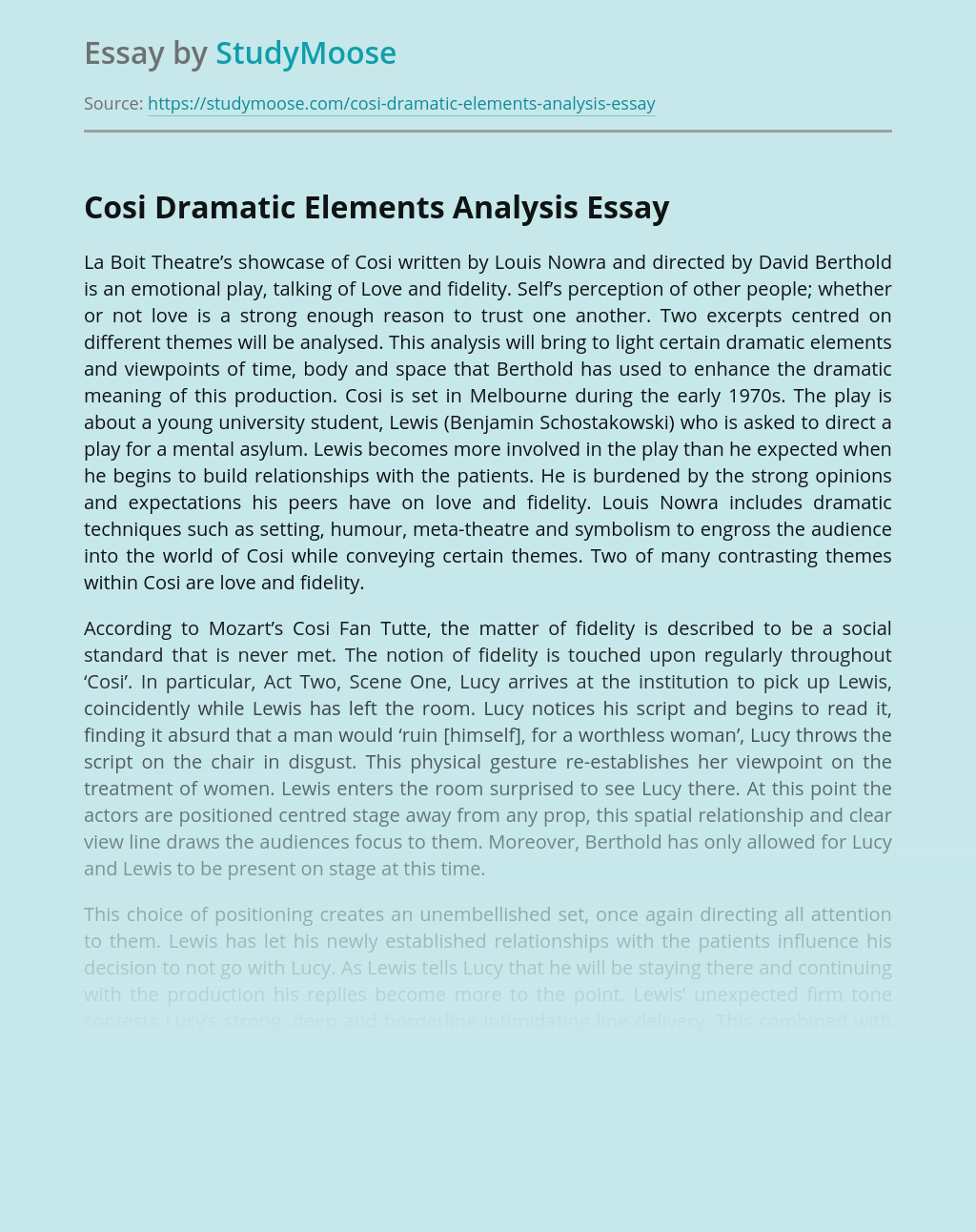 Turn in your highest-quality paper
Get a qualified writer to help you with
“ Cosi by Louis Nowra Dramatic Elements Analysis ”
Get high-quality paper
Helping students since 2015
Stay Safe, Stay Original