How does Arthur Miller develop John Proctors character throughout the play, and what is the relationship between Proctor and Abigail as well Proctor’s relationship with his wife Elizabeth Proctor? In my view there are a lot of ways in which Arthur Miller develops John Proctor’s character during the play. Miller uses The Crucible to express his own views on what was happening in America at the time-McCarthyism was at a prominence. He uses John Proctor as he is interested in the person who doesn’t allow himself to be caught up in hysteria but thinks for himself and stands up for his values against all odds.

Don't use plagiarized sources. Get your custom essay on
“ John Proctors character ”
Get custom paper
NEW! smart matching with writer

To see how Arthur Miller does this we have to analyse the character of John Procter in the play.

John Proctor is a complex character. We can see that he is respected in the town of Salem when he signs his confession. Parris says “It is a weighty name; it will strike the village that Proctor confess”.

This shows that the people of Salem see him as a good (or perhaps a well-known) citizen, however he is independent he has a strong opinion about Parris the minister, which he demonstrates many times: “I have trouble enough without I come five mile to hear him preach only hellfire and bloody damnation”.

“Can you speak one minute before we land in hell again, I am sick of hell”. Proctor is also very honest, speaking the truth no matter what “your father had a habit of willing land that never belonged to him, if I may say it plain”.

Although Proctor is seen as a good man he is racked with guilt after being “lecherous” with his wife’s servant, Abigail Williams. He is very remorseful and wishes to do right by his wife from now on, although he is still tempted “Abigail I may think of you softly from time to time. But I will cut off my hand before I reach for you again. Wipe it out of mind. We never touched Abby”.

His emotional scene with Elizabeth when they have been informed that her name has been “mentioned somewhat” in court by Abigail, shows how he tries to do his best (to make up for his “mistake”) but he is always looking for the easiest possible way to get out of whatever predicament he is in. In fact the “somewhat mentioned” method seems to be the method of this type of “witch-hunt”, whether it be in the Salem trials of 1692 or an American reactionary pursuit of Communist demons. In the broadest terms, Proctor is now forced into more involvement than he had previously desired.

He does not choose to go to Salem and denounce the proceedings and Abigail, the only thing that really forces him to go is Elizabeth. We sense from this that he is thinking of himself as much as of Elizabeth. He suggests finding Ezekiel Cleever and informing him that Abigail said that Elizabeth was a witch “in sport” (as a joke). However when Proctor suggests this, he is suggesting an easy option and an option that Elizabeth knows will be unlikely to be successful. “John, with so many in jail, more than Cheever’s help is needed now, I think. Would you favour me this? Go to Abigail.”

Miller believes that society is never an excuse for our failings, and that we are responsible for ourselves, and Proctor is constantly willing to stand up and be counted, to live up to his name, except that human weakness and guilt sometimes drag him down. This weakness and guilt make him easier to identify with, he is not perfect, but flawed. In the final act Proctor struggles with the predicament that he is in but he makes up his mind with difficulty but believes his final decision is correct (to sort of sacrifice himself as a martyr for common sense).

“Then who will judge me? God in Heaven, what is John Procter? I think it is honest, I think so; I am no saint. Let Rebecca go like a saint; for me it is fraud!” He struggles with his decision, but decides; Hale: “Man you will hang you cannot!” Procter: “I can. And there’s your first marvel that I can. You have made your magic now, for now I do think I see some shred of goodness in John Procter. Not enough to weave a banner with, but white enough to keep it from such dogs.”

Miller uses the Salem witch-hunt to put forward his views on McCarthyism-the hunting down and prosecuting of any Americans who were thought to have taken part in anti-capitalism. The accusations became hysterical and many people were asked to “name names” of people in meetings held many years previously. Miller himself was brought before the committee led by Joseph McCarthy. Miller saw the public confessions required by the committee, as parallels with the naming of names at Salem in 1692.

So how does John Proctor’s character develop during the play? In my view I believe that throughout the play he stays a “rebellious” character (there is a constant feud between Proctor and the “authorities”). However I do believe that a number of other aspects about his personality change, which are caused because he is seemingly caught in a web of moral dilemmas involving not only his own fate, but that of his wife, his friends and the entire Salem community. For example he knows that when Elizabeth asks (tells) him to go into town to state that Abigail is telling lies and the whole trial is a farce, he is in a very intricate position because he knows that he could be revealed as being “lecherous” with Abigail.

Although he knows as well that if he doesn’t do anything, Elizabeth could be hung and his children would be without their mother. This moral dilemma really does change his character since he eventually admits to having an affair with Abigail (thus losing his “name”) and he is also found guilty of being a “witch” and hung. Therefore I believe that John Proctor becomes more committed to others rather than himself by the end of the play. In other words he seems to be rather hesitant to get involved in the trials at the start of the play (because of the Abigail affair) but as the “witch hunt” continues he is forced into the spotlight and is ultimately forced into a moral choice. His choice to die is a choice to commit himself to his friends and die an honest man. 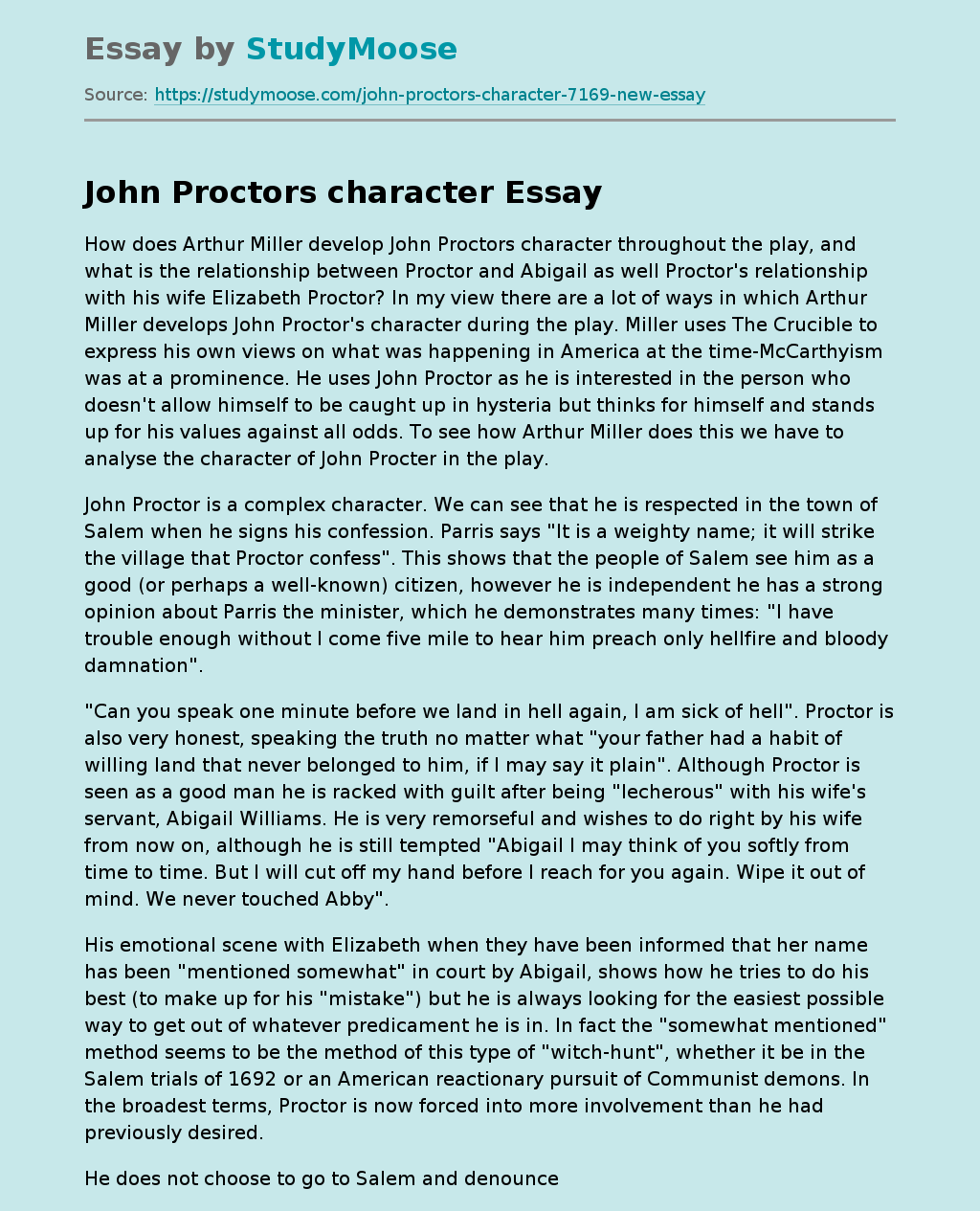