In the short story, The Swimmer, by John Cheever, the main character, Neddy, figures out he has let time slip through his hands and comprehends his true age. Neddy lives in a world of denial about what is really happening in his life. Over many years, Neddy successfully blocks out the “misfortunes” (48) of his life, causing him to forget these past memories. The removal of these memories causes Neddy’s concept of time to be surreal.

Along his journey, Neddy figures out he has lost his wealth, his children are in trouble, he had an affair with his mistress, and he no longer lives in his house.

Don't use plagiarized sources. Get your custom essay on
“ “The Swimmer” by John Cheever: Neddy’s Character ”
Get custom paper
NEW! smart matching with writer

His unhappiness is made known by the ending of the short story, when Neddy is left with nothing but pieces of past memories he has tried so hard to forget. Neddy discovers he is unable to slow down his aging through the inevitable passage of time by the changing of the seasons, his voyage along the river, the flaws of his imagined map, and the conversations he shares with his neighbours.

The changing seasons cause Neddy to question his sense of time passage and reconsider the memories in his life he has forgotten or chosen to forget about. Neddy describes the setting as “a clement midsummers day” (43), with the “massive stand of cumulous cloud so like a city in the distance” (43). The summer weather associates Neddy to his youth and “the intenseness of his pleasure” (43). Neddy also celebrates the fact that “his life was not confining” (44), presenting his life as one of freedom and optimism.

As he proceeds to swim, Neddy senses the environment around his changing. Since it was midsummer the tree must be blighted, and yet he felt a peculiar sadness at this sign of autumn” , reveals that Neddy is having difficulties distinguishing a sense of time. “What had become of the constellations of midsummer” , reveals Neddy has been living in a different time frame, one where he is better off. Neddy worst moment occurs when he feels his strength draining and craves a drink to increase his stamina, as the storm causes “the cold in his bones and the feeling that he might never be warm again” .

These feelings arise at the same moment when Neddy discovers he has no recollection of his “misfortunes”  or his friend’s illness. Neddy blocks out the negative memories from his past, creating holes in his memory as he ages. The continuous flow of the river emphasizes Neddy’s irreversible progress of aging and the elusiveness of his past memories. Neddy imagines the river “with a cartographer’s eye, that string of swimming pools, that quasi-subterranean stream that curved across the county” .

The river provides Neddy with an escape from his aging body and unpleasant memories. This false sense of freedom can be seen when “by swimming in this murk, but he reminded himself that he was an explorer, a pilgrim, and that this was merely a stagnant bend” . Neddy is able to feel a connection with his old life by accessing the swimming pools of everyone in the community, as “prosperous men and women gathered by the sapphire colored waters” . The familiarity and belonging that associates Neddy with his youthful days, disappears as he becomes exposed to reality. For the first time in his life, he did not dive but went down the steps into the icy water and swam a hobbled sidestroke that he might have learned as a youth”  marks the exhaustion of Neddy’s body finally catching up with him. Neddy finds “he could no longer recall with any clearness the green water at the Westerhazy’s, the sense of inhaling the day’s components, the friendly and relaxed voices” , revealing that Neddy is on the verge of discovering how much time he has let slip past without noticing.

The river can be compared to the “distance that made his return impossible” , as both the river and time taken to complete Neddy’s journey only flow in one foreword direction. There is no way for Neddy to start his journey over and avoid the realization he has been hiding memories from himself. Neddy loses his identity with his progression along the river, making him accept the inevitable passage of time as his old age catches up with him. Neddy transitions him from a safe and secure world to an unknown community when he embarks on his voyage using only the mental maps he remembers from his youth.

Neddy explores his neighbourhood with “only maps and charts he had to go by were remembered or imaginary but these were clear enough” . These maps distort Neddy’s sense of time and location. Neddy first stops at the Grahams, where he is greeted with respect and surprise over his unexpected visit. When the storm hits, Neddy becomes suddenly unsure of his surroundings. This is confirmed when he asks himself, “was his memory failing or had he so disciplined it in the repression of unpleasant facts that he had damaged his sense of the truth” ?

Neddy forgets his neighbours moved and that his friend had been ill. He is further upset by the sympathy he receives from the Halloran’s for his unknown misfortunes, making Neddy feel as though “he had no freedom of choice about his means of travel” . Now that Neddy has uncovered missing pieces to his life, he must continue his journey, but instead of swimming home, Neddy must come to terms with his true age. Neddy feels “close to drowning” because he is close to uncovering past memories he tried so hard for years to hide.

The conversations Neddy has with his neighbours reveal the lack of knowledge he has about his community and with his own life. The first time Neddy experiences unclear thoughts is when he shows up to the Welcher’s and finds that they have drained their pool and put their house up for sale. At the Halloran’s house, Neddy is told that he “sold the house and your poor children” , but he does not recall these events. Although Neddy’s visit is unplanned, the Halloran’s lack of surprise that he showed up unannounced indicates Neddy has made this journey before.

The Hallorans react to Neddy’s confusion with “unseasonable melancholy” , not wanting to upset or reveal Neddy’s age to him too quickly. At the Biswanger’s house, Neddy is treated rudely and overhears that he “went for broke overnight-nothing but income-and he showed up drunk one Sunday and asked us to loan him five thousand dollars” . Neddy no longer remembers when he had an affair with his mistress and wonders why she thinks he is immature when he feels he is a wealthy and successful adult. Finally Neddy reaches his house but “he was so stupefied with exhaustion that his triumph seemed vague”.

None of the clues from his neighbours prepare him to find an empty house with “doors locked and rust came off the handles onto his hands” . Neddy never truly realizes the extent of his slipping memory until seeing his deserted home, which leaves him feeling alone in the world. Without a community or family, Neddy’s familiarity with his mental depiction of his surroundings becomes doubtful. The significance of our inevitability to deny the passage of time is emphasized by Neddy’s discovery of his true age.

Cheever reveals Neddy’s true age by relating the changing seasons to significant moments in Neddy’s life. Summer weather is associated with youth, autumn with retirement, and winter with old age. The river can be seen as the continual forward motion of Neddy’s life. Neddy cannot go back and change the actions of his past, nor can he ever truly forget his mistakes. The imagines maps prove Neddy has been living in the past because the neighbourhood as he knows it has changed with the progression of time.

The only connection Neddy has with his previous secure life is the old memories of how he sees that things should be. Neddy doubts his own mind when his conversations with the community hint he is mentally unstable. The alcohol consumed at the neighbours acts to further distort Neddy’s sense of time. Although Neddy’s mind has been living in a youthful state, his body cannot keep up to the physical exertion he places on it. Neddy learns he cannot evade the limitations of his body and must find a way to accept his age. 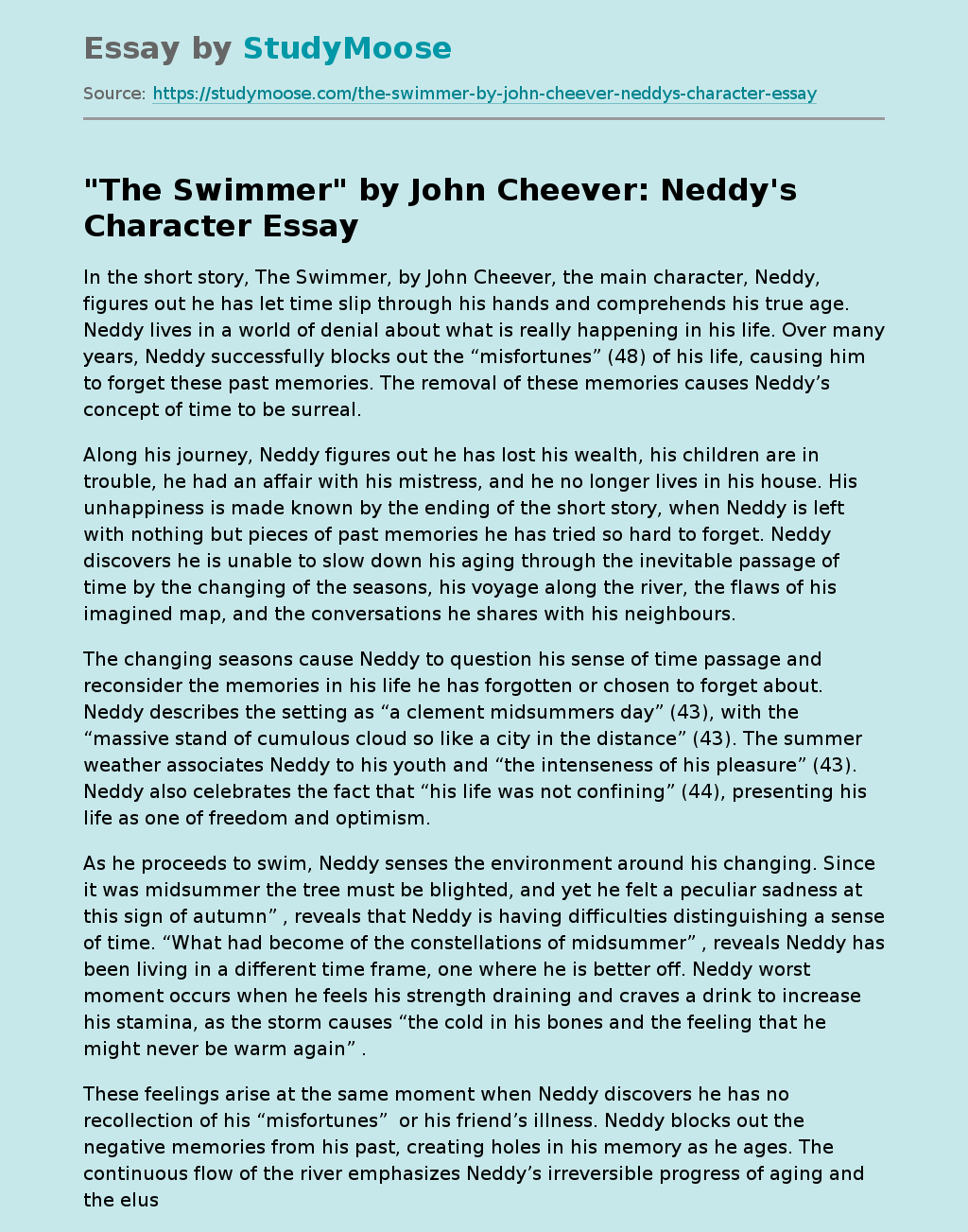