“I deliberately set very high goals for myself…why not? No limits” (Phelps 14). Michael Phelps is a name that will always be associated with the word swimming. He made the sport well-known by his eight medal wins at the 2008 Beijing Olympic Games, and is the most decorated Olympian in the world. He had been swimming since he was seven years old, and competed at only fifteen years old in his first Olympic Games. Michael Phelps has affected the world for good by bringing honor to the United States, elevating the sport of swimming, and proving there are no limits.

Michael Phelps had brought honor to the United States. For example, “[Phelps]American swimmer, who was the most-decorated athlete in Olympic history with 22 medals, which included a record 18 gold. At the 2008 Beijing Olympics, he became the first athlete to win eight gold medals at a single Olympics” (Britannica. com). This is a straightforward list of Michael Phelps major accomplishments. Those records were personal achievements, but at the same time America’s records.

Phelps said after winning the 400-meter free relay, “We had set a world record, really. The Stars and Stripes. The American men. Us” (Phelps 1).

The relay team from America had won gold at the 2008 Beijing Olympics. Everyone watching the Olympics was able to see the number one by United States of America on the scoreboard which brought honor to our country. After Phelps eighth gold medal win Lezak and Phelps expressed, “[Jason Lezak] we’re part of history… [Michael Phelps] we were honored after the race to be able to carry around an American flag that had flown in Iraq…” (Phelps 217-218).

They had the honor to carry our American flag after winning the 400m medley relay in 2008 Beijing Olympics, and after Michael Phelps won his eighth gold medal.

The medley relay had always been won by America, and Phelps and his teammates helped keep that winning streak. In the end, Michael Phelps will always be remembered as the American swimmer who made history. Michael Phelps accomplished his dream to elevate the sport of swimming. For example, “Phelps transformed swimming, inspiring a generation at home and abroad, by building an audacious program out of grit, guts, and a burning desire to make swimming cool for children all over the world. ‘I wanted to change the sport and take it to another level,’ Phelps said” (New York Times).

Michael Phelps had stated multiple times that his biggest dream is to take swimming to another level so people will talk, think, and look forward to watching swimming. It was inevitable that people would watch the 2012 London Olympics after history was made in the 2008 Beijing Olympics. Michael Phelps said, “My main goal was to raise the sport of swimming…I’d heard they had made an announcement at Yankee Stadium when I’d won the 100 fly.

The St. Louis Cardinals had held up their team bus back to the hotel in Cincinnati so the players and coaches could watch us win the medley… he goal that I have and I’m working on is in progress…I think it’s really starting to get more of an awareness for the sport in the United States” (Phelps 221). Other major athletes had respect for our team at the Olympics by watching them swim. Michael Phelps felt his goal to expand swimming onto a larger scale in America was on its way.

“Clearly more people were interested in swimming than ever before; USA swimming saw an eleven percent jump in the number of people joining in 2009 over 2008, and said the growth was because of the “awe-inspiring performances” of the U. S. team at Beijing Olympics” (Phelps 237). Michael Phelps biggest dream and goal was proven to be attainable by the new number of swimmers. He had helped the growth of new swimmers by leaving a mark on swimming since he won the highest amount of medals ever in a single Olympic. Michael Phelps accomplishments have made swimming stand out which increased the number of children aspiring to be involved with the sport. Michael Phelps has proven there are no limits.

For example, “In Spring 2001, Phelps set the world record in the 200 meter butterfly, becoming the youngest male swimmer in history (at 15 years and 9 months) to ever set a world swimming record” (Bio. com). His records reveal that Phelps had much potential even at young age. He had also proved there are no age limits to excel at what you love. “So many people along the way, whatever it is you aspire to do, will tell you it can’t be done…There will be obstacles. There will be doubters. There will be mistakes.

But with hard work, with belief, with confidence and trust in yourself and those around you, there are no limits. Perseverance, determination, commitment, and courage-those things are real…the will to succeed-it’s everything. That’s why, on the pool deck in Beijing in the summer of 2008, there were sometimes no words, only screams” (Phelps 6). Situations or people may stand in the way, but with your own will there are no limits. He proved this true by pushing past doubters and training with great effort which resulted in him earning eight Olympic gold medals at the 2008 Beijing Olympics.

Never, I said, let anyone tell you that anything is impossible. There were people who said no way anyone could win eight medals…when people say that, I want to prove them wrong. I was able to prove them wrong this year” (Phelps 227). When people doubted Michael Phelps it only made him want to persevere further. He believed people put limits should never put limits on your goals because you can surprise the world like when he won his eighth gold medal. Michael Phelps did not doubt himself, had determination, and proved there are no limits.

Given these points, Michael Phelps’ accomplishments had affected the world for good. He has brought many gold medals to the United States, helped more people become more involved with swimming, and proved that the sky’s the limit when it came to goals. Through the Michael Phelps Foundation, for example, hopefully he has inspired a swimmer to reach for nine gold medals. Phelps biggest dream was to involve more people in swimming, and as the years progress the numbers are growing and the swimming world has been setting new records. 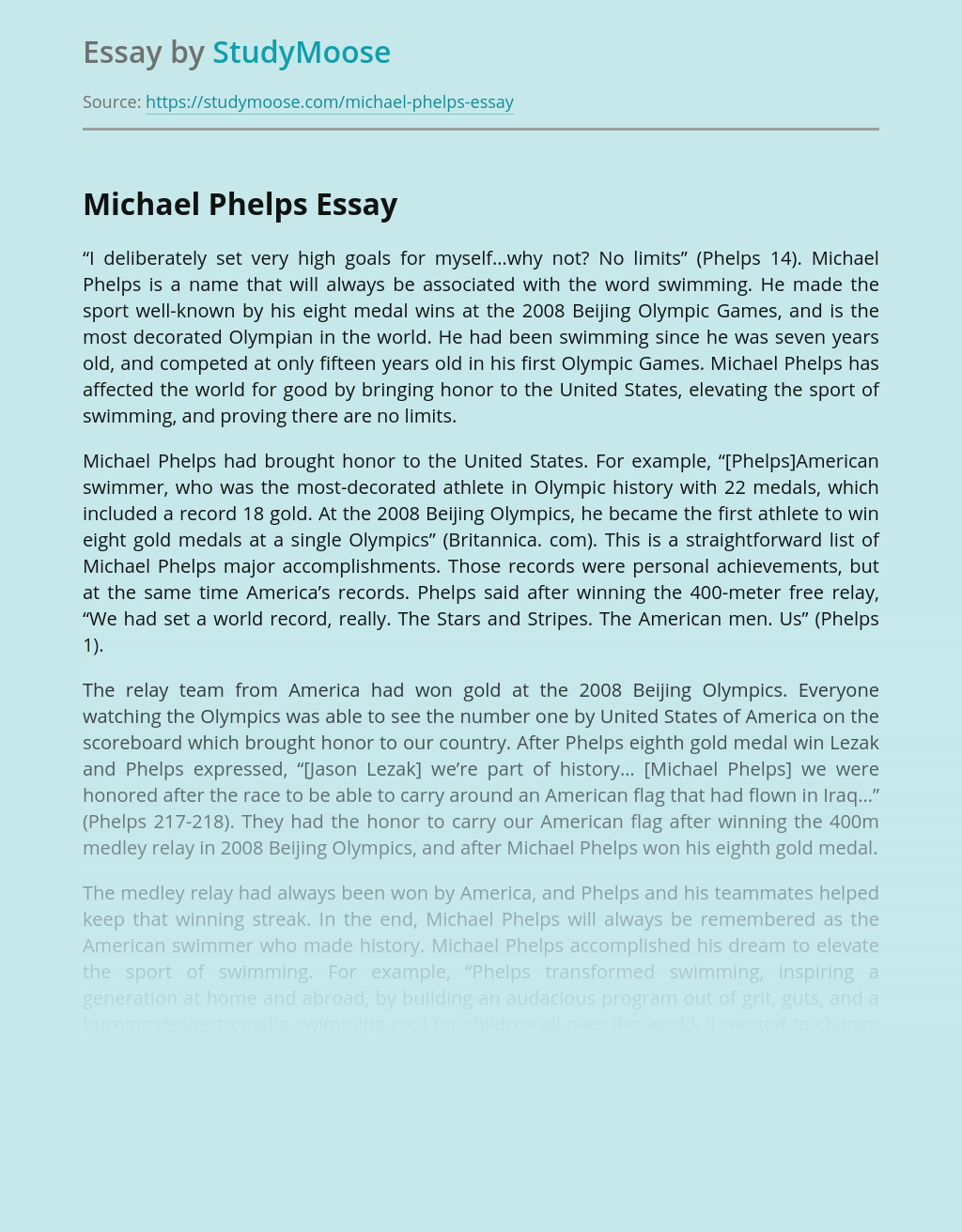