The Swimmer by S.J. Butler

Fear is a feeling all of us posses. You can be afraid of spiders, heights or perhaps even something as typical as water. Every human mind is different, and we all have our own worry and has a hard time. The short story “The Swimmer” (2011 ), written by S.J. Butler, is a story about a lady ´ s fear of life and her effort to conquer it. The theme of fear in the story is expressed by the primary character ´ s development.

Don't use plagiarized sources. Get your custom essay on
“ The Swimmer by S.J. Butler ”
Get custom paper
NEW! smart matching with writer

Even the tiniest choice, can change you for the rest of your life. The story happens in the middle of the nature, by a big river with many trees around it. The weather is exceptionally warm and whatever is very peaceful. The primary character resembles the nature really hot and calm. In the river the setting is the reverse of its surroundings, it is gloriously fresh and “the water is nontransparent, swirling with small particles, an unclean muddy green from the soil it carries” (p.

3 ll.48-49). The main character has a feeling of wanting to try something new, something refreshing and different simply like the river. The distinction in between the river and its environments has a vital significance for the main characters development.

The main character of the story is a girl with a daily routine, consisting of working and looking at the nature outside of her office´s window. She wants to go down and take a swim in the river, but her fear holds her back.

The fear of being seen and what she might finds inside the river. The narrator explains that “every day she looks out at the river, and longs to swim in it” (p.2 ll.7-8). Even though she tries to convince herself to go swimming by reminding herself that “It´s a normal, natural act” (p.2 l.19), it has not stopped her from regretting, and going back to work again. The fear of not knowing where she might be swept to, and not being strong enough, symbolizes the main character as person. She doubts her own strength, not only in a physical way but also her personal strength, by not having the ability to carry out what she really wants. She decides to get in the water and all of a sudden, her fear of what might happen to her is gone and “encouraged, she decides to swim upstream as far as the bridge behind the house” (p.3 l.60). The girl undergoes a development as she changes from being afraid to become more confident on herself. The swan she meets symbolizes the main character.

The swan looks calm and still “although, that under the surface it must surely be paddling” (p.4 l.2) just like the girl, who looks normal on the outside, she has a lot to struggle with on the inside. She is confronted with the swan and “there´s nowhere for her to hide.” (p.4 l.86) She now copes with her fear, and the stronger she gets, the more she wants to she wants to swim. She stops carrying about being seen, and she dares to swim closely to the swan, even though “her nan used to tell her a swan could break a man´s arm with its wing” and she stops worrying about “what it could do to her, down in the water” (p.4 ll.80-82). When the swan is trapped, she starts to “untwist the line where the bird bound itself in its struggle”, just like she overcame her fears and struggles and started to swim (p.6 l.152). The swan is finally free from its captivity, and disappears along the river where it never will be seen again.

The girl lets go of her anxiety, it disappears from her consciousness and she will never be afraid again. Like most people the girl in the story struggles to overcome her fear, which she in the end succeeds in conquering. The theme of fear in the story is illustrated in the way the main character changes to be a girl with low self esteem, to becoming a strong and independent girl. Something that will be a part of her in everything she goes through for the rest of her life. 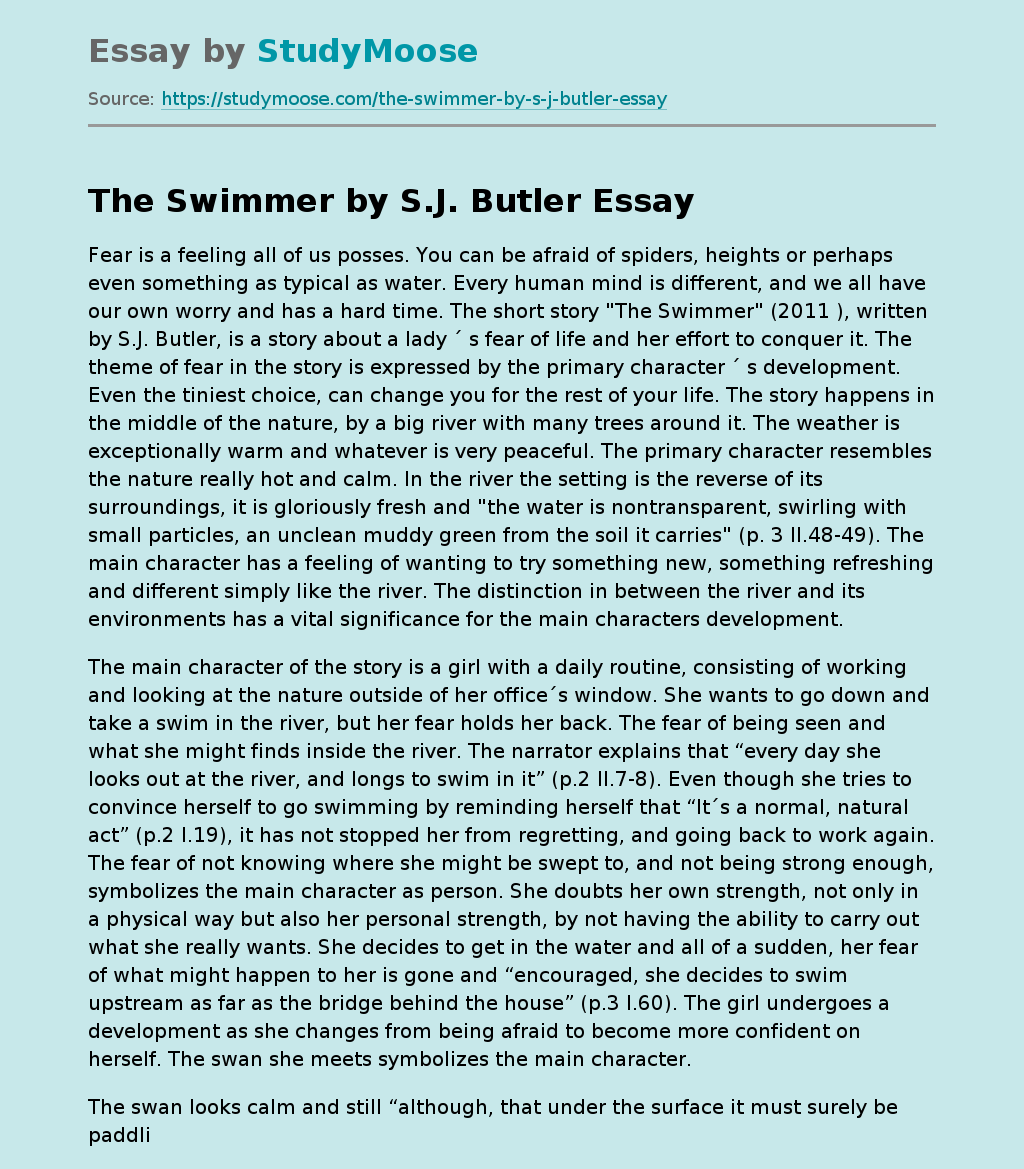