William Butler Yeats did not readily support the nationalist ideals in Ireland not so much because he valued the independence of his country so little but rather questioned the means by which it was being promoted. Regardless of Yeats’ political sentiments, he had high regards for the cultural and social heritage of his country as attested to by his earlier works and futures efforts to establish traditional art and literature institutions. The setting of the poem reflects the rise of many political ideologies in Europe that brought into institutions of leadership and society.

In Easter, 1916, Yeats recalls the Easter Rising of April 24, 1916 that resulted in military action in Dublin as well as the execution of several leaders of the revolutionary movement, many of whom Yeats was acquainted with. Social Identity In the first stanza of the poem, Yeats illustrates a society that does not really show any indication that it knows or cares for each other. The lines of the verse bring to mind people meeting in the in streets, tipping their heads to each other and uttering automatically greetings without really meaning any of the words spoken.

By referring to the social pleasantries as “polite meaningless words”, Yeats suggests a superficial veneer to these encounters. As reservation to the nationalist movement, the scenario indicates the lack of real communication in society and the predisposition to keep social appearance. Thus, there is also a lack of social identity or concern for social issues. The lack of social identity translates to a compromised national identity.

The lack of support form civil society for any nationalist initiative will compromise the political will to achieve true independence. In this perspective, Yeats may have viewed that Irish society was still too attached to the social status quo for it to pay the price for a “terrible beauty”. At the same time, it gives the impression that the issue was still limited to a few individuals and even if there were public knowledge or support for the nationalist concerns, it is not discussed in public or a subject of open debate.

These dichotomies between acceptable social veneers and the real interests of individuals are also reflected in the various characters Yeats uses in the poem. Though they are all portrayed as dramatic characters, he eventually points out that they are participating in a comedy. Yeats points out that regardless of how much the nationalist cause is to each of these characters, there is a persistence of individualistic purpose: even if there is a realization of a collective Irish identity, people remain generally unconcerned with the interests of other people.

Ultimately, what Yeats criticizes is the events leading to the Easter Rising and addressed neither the social conditions that will support nationhood or the need for a national identity. Ideology and Reality Yeats did not equate independence with rebellion. There is no denying his regard for the leaders of the Easter Rising: he portrayed them not as idealized heroes but rather as ordinary men answering to an extraordinary cause against extraordinary odds.

According to him, the biggest threat to realization of independence is the concentration of politics instead of reform. As suggested in his earlier lines, at times, the concern was limited to political debate and not the social issues of independence, keeping issues impersonal and limited to its facade. Thus, Yeats is saying that before the Easter Rising, “ignorant good-will” prevailed implying that though there was discussion of independence, there was no true leadership or organized action to achieve it.

In essence, Yeats felt that no one truly understood the price of “terrible beauty”, or what becomes clearly Yeats’ representation of Irish emancipation. For Yeats, independence for Ireland is to be gained from the civil action rather than political initiatives. Of all the characterizations he uses for the poem, it’s the characters of Patrick Pearse and Thomas MacDunagh that he views will contribute more effectively to Irish independence. He highlights their works as teachers and writers, educating and publicizing their cause to the public.

Furthermore, Yeats considers this the true ideological foundation for independence: Pearse and MacDunagh’s example deter the apathy, the “ignorant good-will” and the conformity in Ireland that was an advantage to English control. Yeats emphasizes the need for the independence ideology as a transformative power in society: neither limited nor exclusive as a political or a social concern. He points out a need for independence leaders to stop romanticizing what has to be accomplished to gain independence and to accept that it will likely be violent, bloody and require the sacrifice of many lives.

In saying that, “Wherever green is worn, Are changed, changed utterly”, there is implication that for independence to be a reality for the country, there is a need for social and political change, a condition he believed remained lacking in the revolutionary movements prior to the Easter Rising. Rebellion and Independence Though he criticizes the sense of nationality that motivated the Easter Rising, he points out that the event serves as a reality check as well as an inspiration for future independence initiatives.

He points out that the Easter Rising should serve as a lesson of what it means to be under the rule of a foreign power and the price of opposing such a power. Despite his personal feelings towards John MacBride, he groups him together with Thomas MacDonagh, Patrick Pearse, Thomas MacDonagh and James Connolly identifying them as men who are sacrificed for Irish independence. Prior to the Easter Rising, Yeats points out that everything was limited to debate which did not necessarily was for the benefit of furthering independence ideologies but was used as venue for personal showcasing.

In the line “as a mother names her child when sleep has come”, Yeats points out that only those who are willing to give the highest sacrifice, using to refer to death and the sacrifice of one’s life, will be recognized by the Ireland, represented by the mother. The suggestion is not a morbid one but rather is in recognition of the men who were executed in connection with the Easter Rising and future likelihood of future sacrifices for independence. Thus, though Yeats questions the nationalist movement that led to the Easter Rising, he considered the Easter Rising itself as an act true to the cause.

He considers the event as marker that Irish society and its views on nationalism and independence have “changed, changed utterly”. Yeats considers these changes had taken too long because of political debate and the lack of political will, contributing as well to the lack of fervor for true independence in society. In essence, Yeats believed that the rebellion parallel to social awakening and the beginning of the true struggle for independence. Conclusion

It should be noted that Yeats has an intimate understanding of the lack of political and social commitment to the ideologies of independence. Like many Irish, prior to the Easter Rising, independence issues was a topic for political debate grandstanding and did not reach popular audiences. The poem also marks a shift in Yeats views on the revolution: the action taken against the revolutionaries and the general pubic to implement control made him question the social value of the political status quo.

In summary, Yeats reservation of the nationalist movements that culminate to the Easter Rising rose from his sentiments that they were mired in politics and did not focus enough on social change and did not address the apathy, the “ignorant good-will” and the conformity that prevailed in Irish society. However, he also commends the Easter Rising as decisive albeit unsuccessful action to gain independence. In conclusion, his critique is that there is a need for action, reform and authenticity of ideology, a state that neither accommodates for personal or political grandstanding and romanticizing of the struggle for independence. 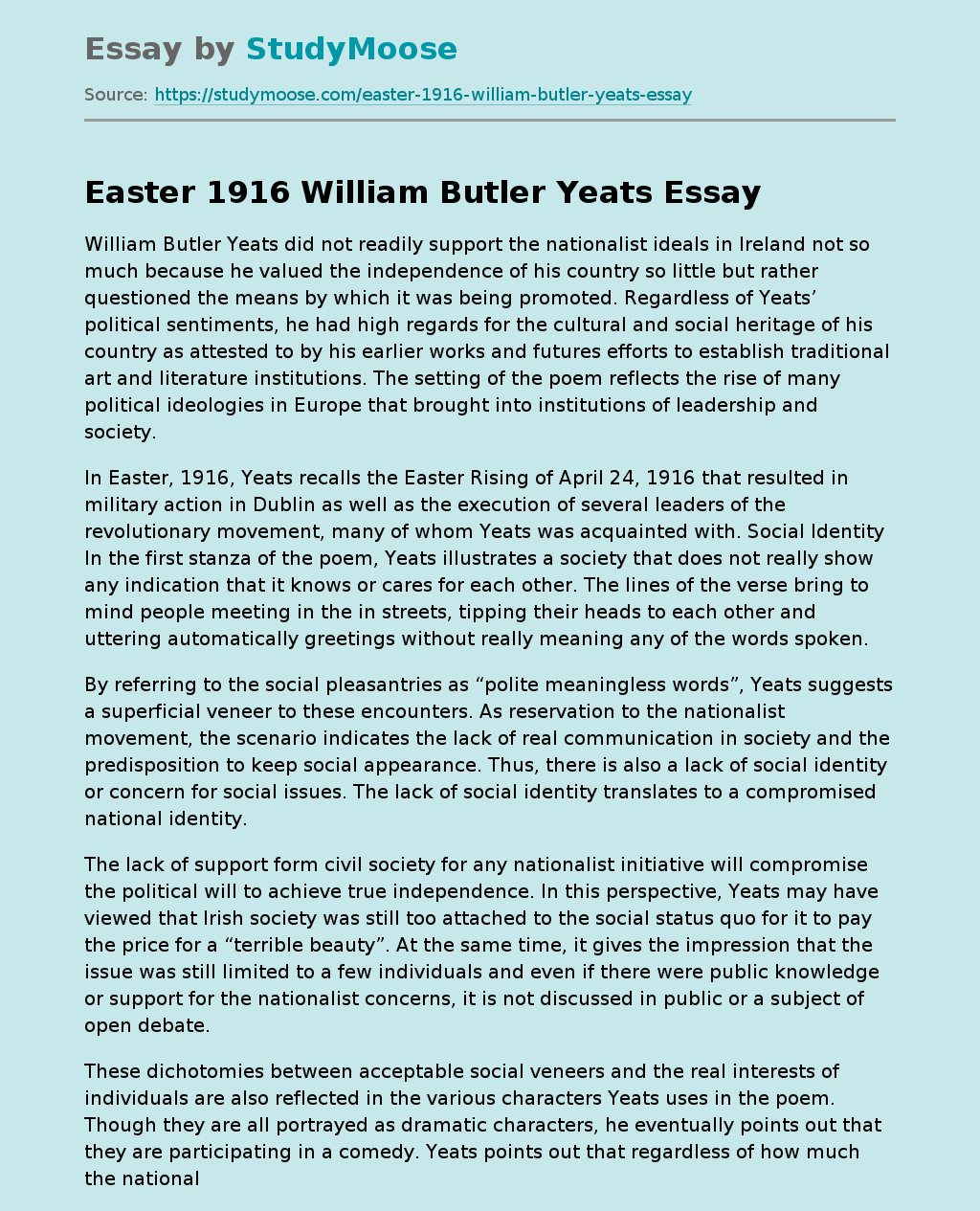