“William Butler Yeats deals with an interesting variety of subjects and his poetry is full of powerful images and impressive descriptions. Discuss.” Submitted by Hollie McLaughlin.

I very much enjoy reading the poetry of William Butler Yeats. What I like about the poetry is the multi-faceted man who emerges. In Inisfree he is the searching, restless 25 year old, looking to nature as a kind of redemptive force. In ‘September 1913’ he is the ardent political critic of the soul-destroying materialism. In ‘Easter 1916’ he is again many-sided, the man who commemorates the great heroes and is able to confess he was wrong about their existence, as well as the man painfully aware of war’s wastage of youthful potential.

My favourite, ‘The Wild Swans at Coole’, is Yeats as the disillusioned man whose “heart is sore”, the man of “unrequited love”, the man aware of mortality. In ‘Sailing to Byzantium’, Yeats symbolises universal man in search of meaning and permanence amid the transience of life.

Who couldn’t be intrigued by this man!

In ‘The Lake Isle of Inisfree’, Yeats echoes for me, the longing we all experience at times to escape the urban jungle, the “pavements grey”. This grim image of oppression is something many people have to face worldwide. A frequent reoccurrence in the poetry of William Butler Yeats is his idea of an idyllic utopia. I quite liked the discrepancy between his two blissful paradises. In ‘The Lake Isle of Inisfree’ he speaks of the bucolic lifestyle found in Ireland.

This poem represents Yeats’ Irish heritage. “I hear it in the deep heart’s core”. The second poem in which Yeats depicts a great fondness of a particular place is ‘Sailing to Byzantium’. It is said that Yeats has always had a profound interest in the Greek civilisation of Byzantium. There is a great contrast presented between these two ideal worlds of his, these being a sort of mythical place in comparison to a mere county Sligo.

In my opinion, I believe that Yeats is a master of rhyme. When reading his poems, they tend to flow very easily off your tongue. I find this can make a person who doesn’t particularly like reading poetry, feel it to be quite simple and enjoyable to read. His poems never seem forced, they don’t sound artificial or contrived. It is as if he didn’t even plan out his poetry and what he was going to write, he just grabbed a pen and allowed the poem to write itself with ease. The poem which I think is the best example for Yeats’ rhythmic quality of writing is ‘The Lake Isle of Inisfree’. Here, I find the rhythm to be almost hypnotic, with the use of long vowel sounds and long slow lines throughout.

This hypnotic rhythm carries you away to a dream world, an idyllic utopia. I also find that the last two lines in Yeats’ poem ‘September 1913’ captures his sense of hopelessness and disillusionment with the Ireland of 1913. “But let them be, they’re dead and gone, they’re with O’Leary in the grave”. I very much enjoyed Yeats’ use of repetition throughout his poetry. From sentence to sentence he often repeats words. Some examples of this may be found when reading the poem ‘The Lake Isle of Inisfree’. “I will arise and go now and go…” “And I shall have some peace there for peace comes dropping slow…” “Was it for this the wild geese spread, for this that all the blood was shed.”

Yeats is often famed for adhering to his use of a strong complex personal mythology which he illustrates throughout his poems by the means of symbolism. Symbols appear in a number of Yeats’ poems and this is a thing that I quite like about his poetry, there are deeper meanings behind the words you read. The complexities of these symbols vary between poems but for the most part they are used to portray or add to the portrayal of the transience of time. Firstly a very simple symbolic message can be observed in the poem “The Wild Swans at Coole”. As Yeats ponders the transience of time and recounts how it has passed him, he exemplifies the messages through the elegant, youthful swans. I believe this is the one exception to the above statement as the metaphor of the swans is very clear cut. “And scatter wheeling in great broken ring.” “Upon their clamorous wings.” The swans seem to show little exertion in what they are doing, which Yeats uses to amplify his lack of physical strength and ability as he is but an ageing man. The theme of time and the use of symbols can be seen at numerous points throughout the poem ‘Sailing to Byzantium’.

Although admittedly this poem is, to a great extent, more complex than ‘The Wild Swans at Coole’. I feel no shame in admitting that this poem is a lot more difficult to fully comprehend and it took more time to understand the symbols and the meaning of the poem in its entirety. In the title, I think that the use of the word ‘sailing’ doesn’t mean to be sailing literally, but instead he uses it the mode of transport that is sailing as a metaphor of the journey of ageing. This poem represents Yeats’ journey through life, as he is approaching old age. “An aged man is but a paltry thing, / A tattered coat upon a stick.” Yeats becomes yet again captivated by the idea of aging and symbols present themselves once more in ‘Sailing to Byzantium’ as he looks to solidify himself for eternity. Two symbols are directly related to his obsession with the transience of time and ideas of immortality.

First of all there is the “perne in a gyre”, which, because of its circular nature, will never stop spinning. Circles are also often associated with continuity of life. The second symbol is not mentioned by name, but instead inferred while discussing the products of “Grecian goldsmiths”. These goldsmiths produced some of the greatest ornaments of all time, which even today are still preserved. Yeats did not want to ever become reincarnated into the body of another living thing, but to remain beautiful and eternal in an object such as a piece of artwork. The symbols Yeats uses are personally my favourite aspects of his poetry as they force you to think deeper into the meaning of what he is actually trying to say or depict.

And finally one great thing about the poetry of William Butler Yeats is his use of ordinary, everyday language. I feel that his use of quite simple and non-complex words results in there being a wider range of people reading his poetry. He takes ordinary language and arranges it in a way that gives them an almost poetic rhythm. An example may be seen in the line “the trees are in their autumn beauty, the woodland paths are dry.” In the poem ‘The Wild Swans at Coole’.

In conclusion, I feel that Yeats does deal with a wide range of different topics, with the use of powerful imagery and impressive descriptions. Yeats’ unique pessimism resonates through the well-crafted lines of his work which effectively portray his sometimes equivocal views. The poetry of William Butler Yeats intrigues me greatly, particularly because of his use of symbols throughout and I very much enjoy ruminating on the meanings within. 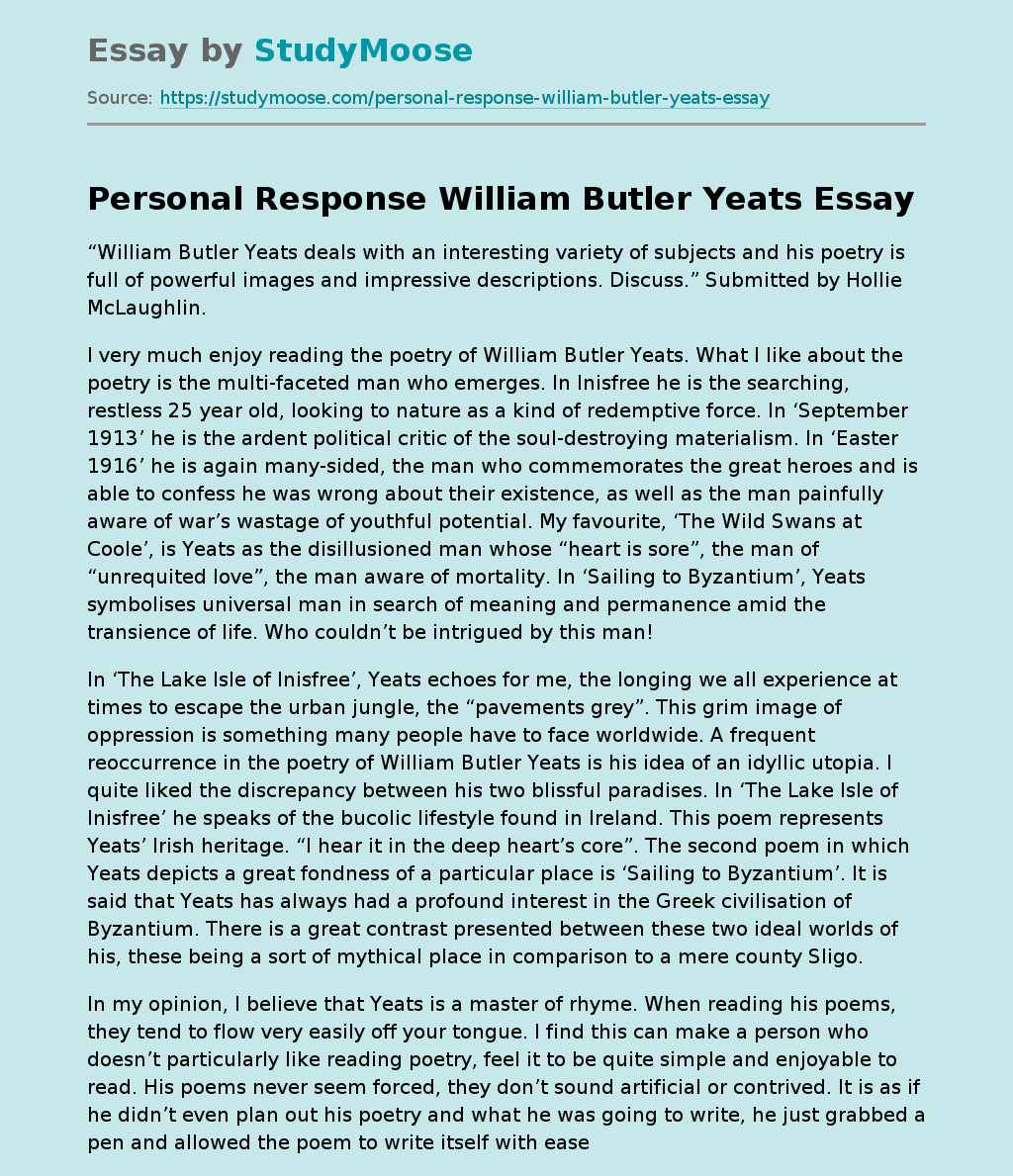