Symbolism and Realism of Baudelaire, Keats and Yeats

Charles Pierre Baudelaire was said to be among the precursors of Symbolism – a movement which employed words to separate the imagination from reality, leading to the chastity of the spirit which rejected conformities. It is said to be an offshoot of Romanticism, one of the most prevalent literary movements in the early twentieth-century. In this poem, Correspondances (Correspondences), Baudelaire emphasized the concepts behind each image which is an example of synaethesia – the correspondence of the senses (EDSitement, 2007).

John Keats belonged to a literary movement called Romanticism – an escape from the real world into the ideal, yet, realizes that the ideal cannot be attained.

Don't use plagiarized sources. Get your custom essay on
“ Symbolism and Realism of Baudelaire, Keats and Yeats ”
Get custom paper
NEW! smart matching with writer

The two poles of this movement are typically reflected at the beginning and end of a poem. The Ode on a Grecian Urn by John Keats is an attempt to express inner conflicts of love and pain.

William Butler Yeats was among the famous early Modernists – making use of Symbolism, Romanticism and Realism. Each contributes to its allusiveness, irrationalism and separation from the traditional, respectively.

The Circus Animals’ Desertion describes the absence of a poetic theme – a document of his frustration and the difference between the fantasy and reality.

The three poems indicated above portray of an escape from the real – the difference between the fantasy and the real. Correspondances dwell on the concept of synaestheisa – a communication among the senses. The senses receive images that Baudelaire processed into symbols. A part of synaethesia is the complementing forms of objects in Heaven and Earth. The images in this poem, Correspondances, become symbols for certain concepts that differentiate the intangibility of Heaven to Earth (Dorra, 1994).

John Keats’ Ode on a Grecian Urn describes the conflict between the temporary and the permanent – of life human and immortal. It revolves around the images of the urn – the thoughts, history and emotions that picture it, and the dynamics brought about by the urn – the thoughts, history and emotions put into action and into the present. At its last stanza, Keats wrote that the urn has teased – which could mean a tease to pass through the real into the fantasy – the thought that beauty is truth and vice versa (Melani, 2004).

William Butler Yeats has contrasted the real and the fantasy in the images of his circus characters in The Circus Animals’ Desertion. In his search for a poetic theme, Yeats has delved into the fantasy to create the images of circus figures to symbolize his creativity that have left him, and to which he wishes to see again. He emphasizes that his circus characters, his creativity, cause his frailty as to create is his life. In lieu to that, Yeats has yearned to create to reject the norms and the old. In the end, Yeats has succeeded in differentiating the fantasy and the real through his circus and his yearning (Cronin, 2007).

These three poets have somehow created a single theme out of different sources. Each of them has presented the subject of unreal and real, their differences and how each can be achieved. These three poets, Baudelaire, Keats and Yeats have created a whole new literary movement out of their own movements – Modernism. Modernism allowed these celebrated poets to shake the traditions of poetry and nurtured the art of poetry through its distinct picture of the fantasy and the real.

Symbolism and Realism of Baudelaire, Keats and Yeats. (2021, Nov 17). Retrieved from https://studymoose.com/symbolism-and-realism-of-baudelaire-keats-and-yeats-essay 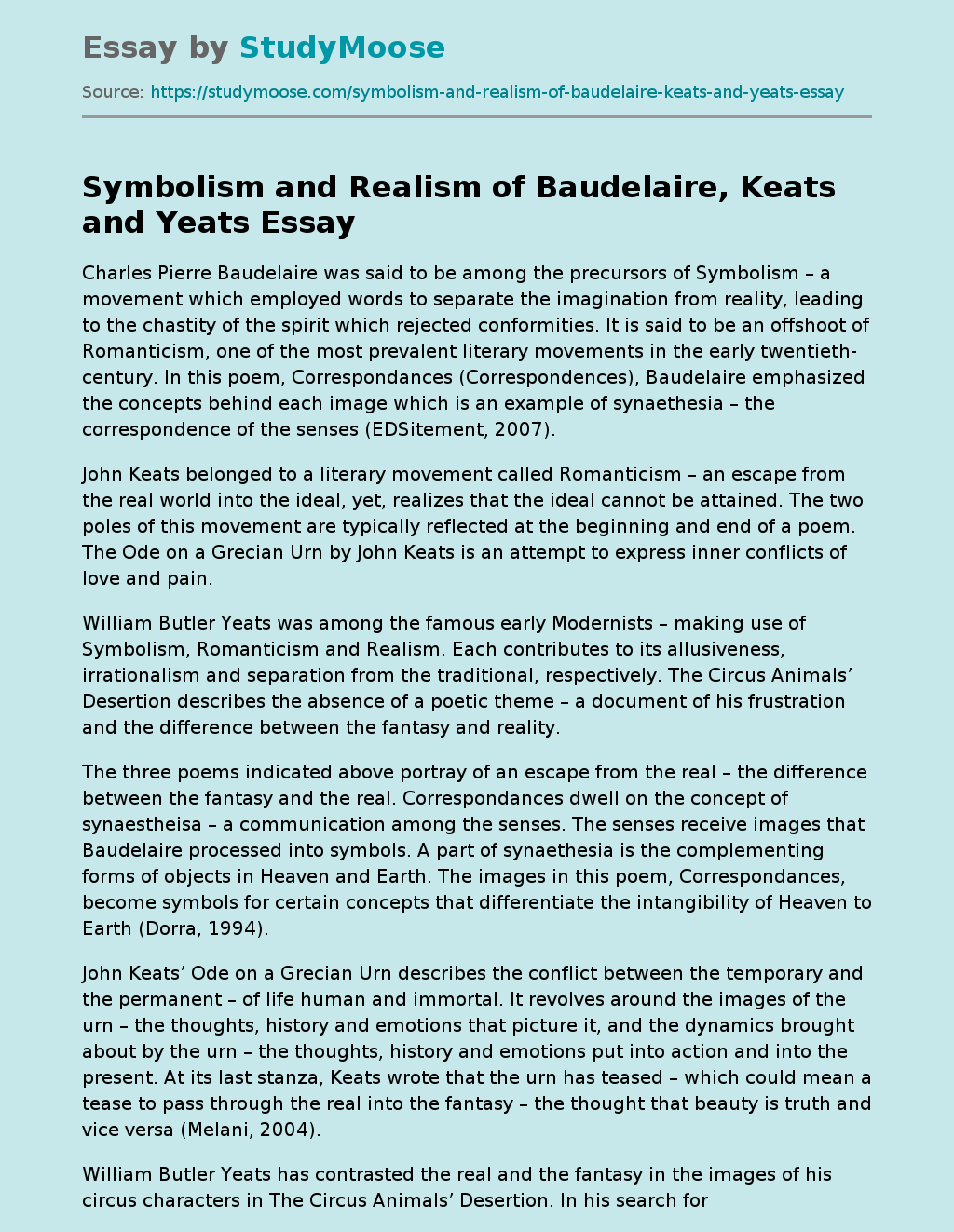