An Analysis of Broken Dreams by W.B. Yeats

A lot of Yeats’ poems about love are linked back to the love of his life, Maud. She is represented in many forms in Yeats’ poetry and Broken Dreams is no exception. By using Maud, Broken Dreams involves themes such as loss, love and time. ‘THERE is grey in your hair. Young men no longer…’ In these first two lines Yeats has set the basis of what the poem will be about, comparing Maud to what she was like when she was young and what she is like during the writing of the poem.

Don't use plagiarized sources. Get your custom essay on
“ An Analysis of Broken Dreams by W.B. Yeats ”
Get custom paper
NEW! smart matching with writer

Yeats switches between the past and the present to present this but instead of using the past tense he goes back to how he remembers Maud and uses it as the present. It can therefore be inferred that Yeats does not want to let go of the past but has done it for so long that it has become his reality, it is no longer just in his dreams.

The dream he is living is then broken when he sees her again looking old and grey. After Yeats’ dreams come the memories of the woman. In three of the five stanzas Yeats repeats the words ‘Vague memories, nothing but memories.’ Yeats’ actual memories of her have faded as he got older, another result of time and ageing.

Yeats can only remember a small amount about her, a large amount of that being her looks and beauty, he has been dreaming about that one thing for so long that he has forgotten everything else about her.

It is suggested that even the memories that he still has become blurred and they are not as they actually were. In the fourth stanza she enters a lake with one small imperfection that makes her stand out, but if she were to leave the lake it is implied that this imperfection will disappear and she will be utterly perfect.

That imperfection is the one of her characteristics that makes her so appealing to Yeats and so even more memorable, if that were to go then perhaps he will forget her altogether. Both the themes of time and memory have been to do with the loss of it. Following on from losing the memories of her, Yeats contemplates never being able to see her again. When she goes into the lake it is not only the memory of her that becomes blurred but during the time that that happened she is getting away from him. ‘And I am afraid that you will run’, this suggests that the woman does not love Yeats as much as he loves her if at all.

It could be interpreted that Yeats pushed her away with all the unwanted attention he was giving her rather than her leaving because she had to like Yeats sees it. Furthermore, towards the end of Broken Dreams, Yeats has written the line, ‘The last stroke of midnight dies.’ This is line to sum up the theme of loss on a whole whether it is time or the loss of the woman.

The stroke of midnight has awoken him from a dream state thinking about this beautiful woman, making Yeats realise that he has lost a large amount of time in the day as he could have been doing something more productive. As well as time there is also the loss and possible death of this woman as Yeats says ‘midnight dies’ instead of ends or finished. Focusing more closely on the woman, who is based on Maud, her Beauty is emphasised throughout Broken Dreams.

At the start of the poem, her looks ‘Recovered him upon the bed of death.’ Her looks alone gave an old, dying man the will to live even though she is of old age herself. Further on in the poem Yeats describes her looks when she was younger, saying ‘You are more beautiful that anyone,’ these two pieces of the poem show that Yeats is completely fixated with the woman and perhaps even enchanted by her beauty. According to Yeats, she is the most beautiful person in the whole world, but that is merely an opinion Yeats has of her.

This opinion on her looks leads him to believe that her beauty alone saved a man’s life when this most likely is not the case. The woman’s apparent beauty in Broken Dreams appears to have hypnotised Yeats into believing that she is a Goddess walking among us, something that I highly doubt.

An Analysis of Broken Dreams by W.B. Yeats. (2016, May 24). Retrieved from https://studymoose.com/an-analysis-of-broken-dreams-by-w-b-yeats-essay 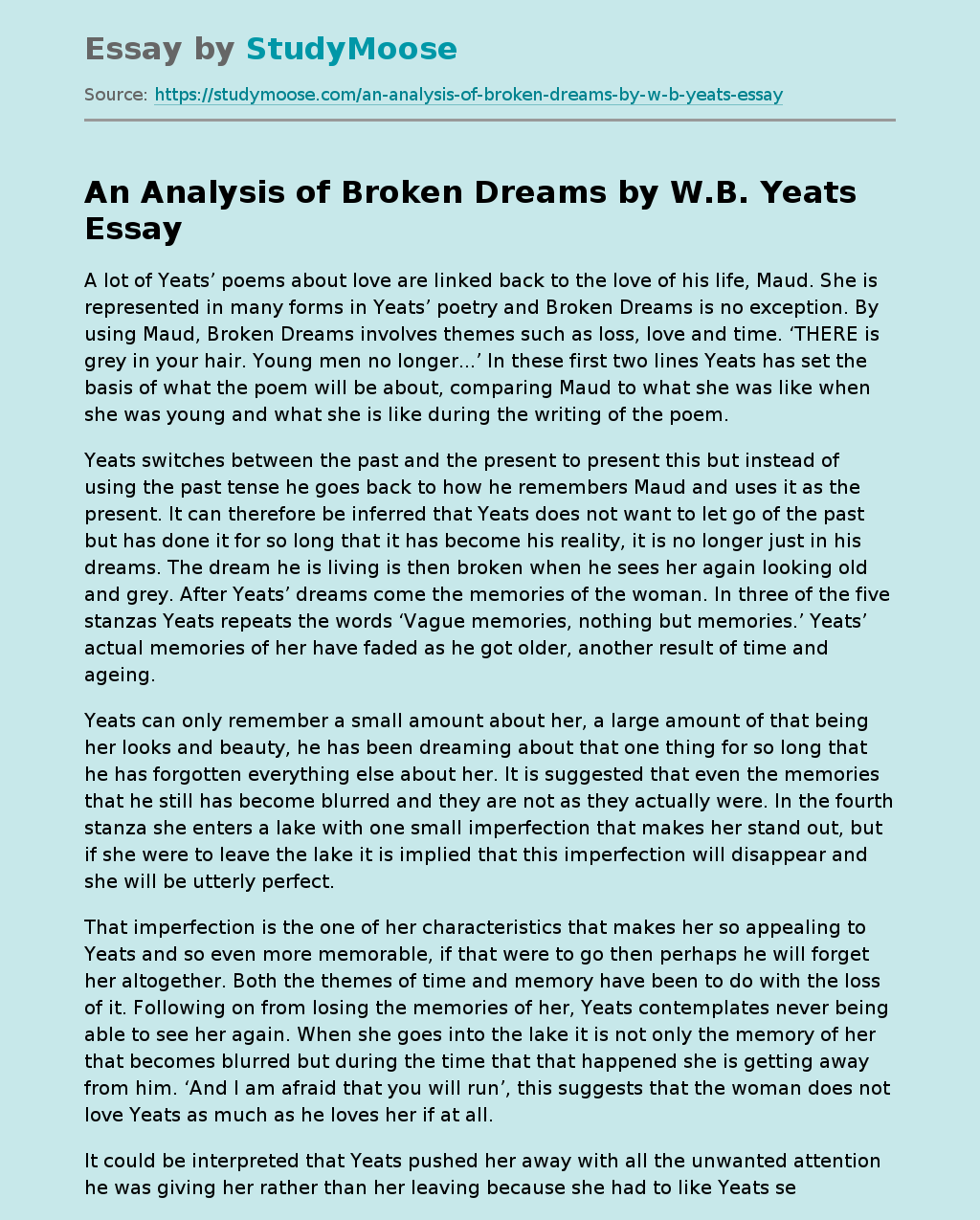