Comparison of Deirdre and On Baile's Strand by William Butler Yeats

Deirdre and On Baile’s Strand are two plays by William Butler Yeats that incorporate a tragic vision. Both plays deal with a single tragic moment in the life of an important figure. The plays are similar in structure and style. Yeats interweaves supernatural elements in both plays — the Shape Changers in On Baile’s Strand and the circumstances of Deirdre’s birth and the question of her parentage in Deirdre. The endings of the plays are similar, however, the process of coming to a conclusion in the plays is different.

Turn in your highest-quality paper
Get a qualified writer to help you with
“ Comparison of Deirdre and On Baile’s Strand by William Butler Yeats ”
Get high-quality paper
NEW! AI matching with writer

No only is On Baile’s Strand masculine in the sense that it takes place near a harsh sea, it is also without fully human women. The one fully human woman, Aoife, that is mentioned in the play, is seen as an evil influence. Conchubar tells Cuchulain:

For I know well that your are praising Aoife —

Now hates you and will leave no subtlety

However, Cuchulain remembers her as being of “stone-pale cheek and red-brown hair” and stated that

None other had all beauty, queen or lover,

With Cuchulain’s vivid descriptions of her, Aoife, although she is not seen in the play, is able to be seen as clearly as the other characters.

You will cry out for him someday and say,

“If Naoise were but living” — [she misses Naoise].

Where have you sent him? Where is the son of Usna?

This is the most tragic part of the play. Even more tragic than the deaths of Deirdre and Naoise because everyone except Deirdre knows that her pleading is futile.

The most dramatic scene in On Baile’s Stand comes after Cuchulain kills the Young Man, not knowing that he is his son. The Blind Man tells Cuchulain that he knows the Young Man’s mother:

BLIND MAN: I knew him and his mother there.

CUCHULAIN: He was about to speak of her when he died.

BLIND MAN: He was a queens son.

CUCHULAIN: What queen? what queen? [Seizes Blind Man who is now sitting upon the bench] Was it Scathach?

There were many queens. All the rulers there were queens.

And further into the conversation the Fool tells Cuchulain that the Blind Man said “the young man was Aoife’s son” and that he had also heard Aoife say that she has had only one lover, and he was the only one who had defeated her in battle. The Blind Man is the one to say “it is his own son he has slain.”

Another important element found in the play is the idea of treachery or betrayal of trust. In both Deirdre and On Baile’s Strand, treachery results in death. In Deirdre Fergus trusts Conchubar and is betrayed by him; and he betrays others in the play by not divulging knowledge he has. Naoise trusts Fergus, and to some extent Conchubar, and is betrayed. Deirdre trusts Naoise and becomes a victim with him after he is killed. Deirdre betrays Conchubar twice. First when she runs away with Naoise and hides for seven years, and again before taking her own life. Conchubar betrays both Deirdre and Naoise in order the win Deirdre and punish Naoise for stealing her from him and, in turn, this is when he is betrayed by Deirdre and Naoise. Early in the play, after Naoise realized that Conchubar has not sent a messenger to meet with them, Fergus tells Deirdre and Naoise that Conchubar will arrive in person. Naoise responds that “he cannot break his faith” and “I have his word and I must take that word.” After seeing a chess-board and remembering the tale of Lugaidh Redstripe and his wife, who both died after being betrayed Naoise speaks:

If I had not King Conchubar’s word I’d think

Fergus recalls the tall of Lugaidh Redstripe as “the tale of treachery, A broken promise” that is best forgotten.

Comparison of Deirdre and On Baile's Strand by William Butler Yeats. (2016, Jun 21). Retrieved from https://studymoose.com/comparison-of-deirdreand-on-bailes-strand-by-william-butler-yeats-essay 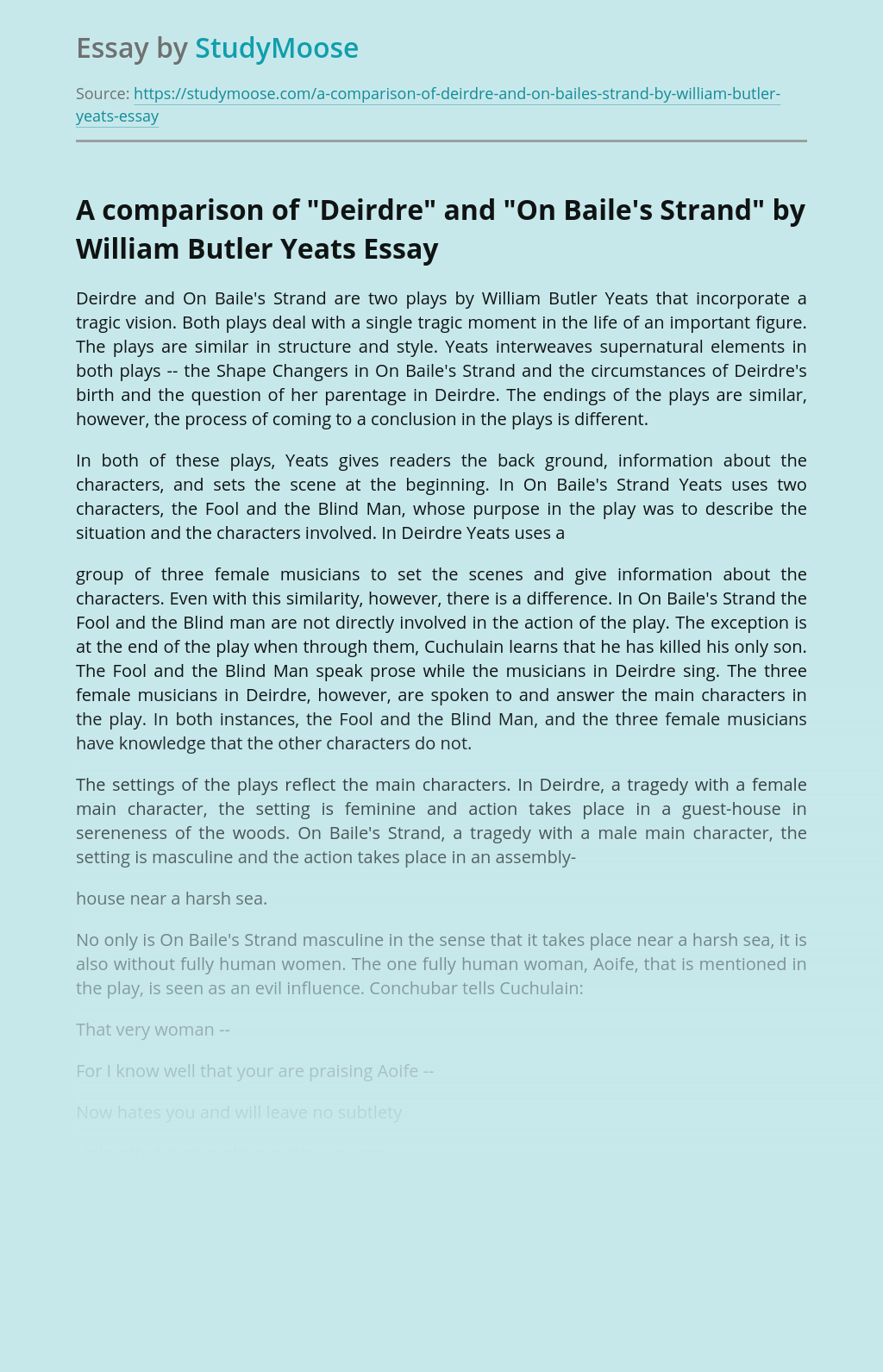 Turn in your highest-quality paper
Get a qualified writer to help you with
“ Comparison of Deirdre and On Baile’s Strand by William Butler Yeats ”
Get high-quality paper
Helping students since 2015
Stay Safe, Stay Original