Leda and the Swan by William Butler Yeats

William Butler Yeats, the writer of Leda and Swan, is considered the greatest poet in the history of Ireland and one of the greatest poets of the 20th century. He was born in Dublin into an Irish protestant family. Reincarnation, nineteenth century occultism, Irish and Greek mythology, European politics and supernatural system fascinate Yeats which will later inspire his poetry and drama. The central theme in Yeast’s poems though is Ireland, its bitter history, folklore and contemporary public life (“William Butler Yeats (1865-1939)”).

Don't use plagiarized sources. Get your custom essay on
“ Leda and the Swan by William Butler Yeats ”
Get custom paper
NEW! smart matching with writer

As a matter of fact, he was acknowledged leader of the Irish literary renaissance as a political movement that aimed to revive ancient Irish folklore, legends and traditions in new literary works (“William Butler Yeats”). It can be perceived in Yeats works “the continually enriched and undeviating course of an inspired man, from earliest youth to age” (Bogan 1938). Yeast’s poems are not far from his experience, individuality and idealism. Yeat’s subtly detached himself to science and modernity but “Yeat’s faith on his own powers of profound character has never failed” (Bogan, 1938).

His sonnet Leda and the Swan is not surprising as an extension of his mystical theory of the universe which he offered in A Vision. A Vision as model of gyres will be symbolic in his future poetry. Leda and the Swan from the title itself will indicate the characters that will be the subject of the poetry. Casual reading will not be enough to fully grasp the author’s messages on this beautiful sonnet.

Yeats, who is the writer of the “Leda and the Swan” seems to assume that the readers already have reasonable background knowledge on Greek mythology.

In order to fully understand this sonnet, it is significant to review Greek mythology and author’s personal idealism. In this sonnet, Yeats retells the story of Zeus seducing Leda in a form of a swan. The writer approached the myth though full of allusions and symbolisms. Leda in Greek mythology is the queen of Sparta was being approached and seduced by Zeus in a form of a swan. The divine swan’s encounter with Leda resulted into the birth of Helen of Troy who was considered the most beautiful woman in Greece.

Helen who would later trigger the eventful destruction of Troy paved the way of the beginning of the modern era. The single act of Zeus towards Leda that results into the conception of Helen produced a remarkable change in history (Leda 2008). The writer in this poetry represented Leda and the Swan as a symbol of beginning. The poem will bring the readers to a sensual and aesthetic experience because the writer used descriptive and adjective words to indicate Leda’s helplessness and vulnerability (staggering, caressed, helpless, terrified, loosening, drop). The poem is a bizarre description of violent act of rape.

However the writer described the physical interaction in a sophisticated way through skilful use of rhythm and flowery descriptive words. It was brutally passionate but violent. The image of rape in this sonnet is artful. What happened with Zeus’s and Leda became an inspiration for the change of history. The representation of swan in the Sonnet is somehow ironic. Swan is naturally perceived as birds of beauty, grace and peace. Contemporary world considers swan as a loving and tender extraordinary creature. However, Zeus used swan in myth as a disguise to easily get Leda.

Zeus as the king of gods congruently symbolizes swan in terms of divinity and mystery though. The writer in the second stanza conveys confusion and wonder to Leda. Does it occur to Leda that what’s happening is a divine intervention? In the last two lines, Leda seems to recognize the power that overtook her. The violent attack of the swan reveals Zeus’s indifference and unconcern attitude for Leda. It shows his selfish desire to fulfil his passion. The swan in this sonnet abused its power of divine intervention. Zeus’s as a divine used his power of transformation in a wrong way.

Swan was obviously used as a figurative word that represents Zeus’s violence, brutality and power. Yeats’s craftily used evocative words that indicate the poem’s theme of violence, Leda’s response, violence and sensuality. The description towards swans “sudden blow: the great wings still; dark webs; shudder in the loins” raping a young woman is terrifying and horrible however the writer manages to awakes reader’s senses because of passionate description of physical contact. Clearly the feelings between the mates are not mutual. But the poetry leaves the question whether Leda was somehow overtaken by the swan’s passion and power.

Leda and the Swan by William Butler Yeats. (2020, Jun 02). Retrieved from https://studymoose.com/leda-and-the-swan-by-william-butler-yeats-essay 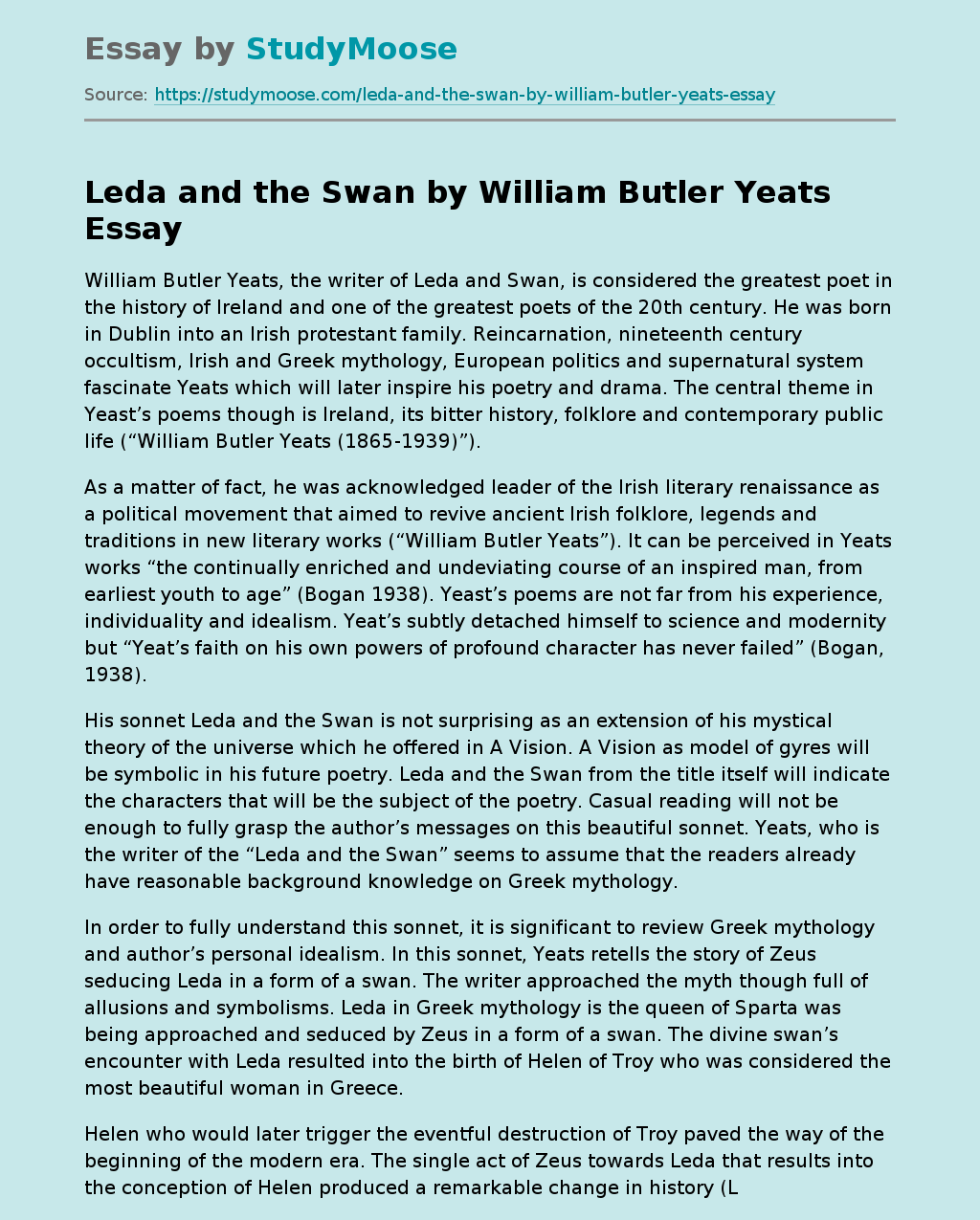