The Cuban Swimmer and Religion

Margarita Suárez, a 19-year-old swimmer, is competitively swimming in a race from San Pedro to San Catalina while her family guides her way from a boat. With the support and on-going praise of her loved ones and her passion for the sport, Margarita Suárez vigorously pushes herself through the cold Pacific Ocean not only to achieve her hopes, dreams, and the prize, but also to bring her family pride and honor.

While she does stand up for her own cultural identity as Cuban immigrants against an unaccepting American society, Margarita Suárez is more than just a cultural hero and testament of a strong family bond – she is an allegorical figure of the savior, Jesus Christ.

Don't use plagiarized sources. Get your custom essay on
“ The Cuban Swimmer and Religion ”
Get custom paper
NEW! smart matching with writer

Margarita and the others around her are biblical figures fleshed out, given real human emotion and real human fault. They are personable people whose traits mold the biblical figures into characters one can relate to. Margarita Suárez is an adept swimmer, graced with the skill of speed and mastery over the water.

She is one with the ocean, as her mammalian relative, the “seal” (40).

Aida Suárez, her mother, is awe-struck by her daughters sheer talent, and believes “a spirit, an ocean spirit, must have entered [her] body while [she] was carrying her” (41), remniscent of Jesus’ virginal conception. She is not able to begin to “think that a daughter of” (40) hers would grow up to be such a special, unique child. Her quiet surprise and delight is similar to how Jesus’ mother, Mary, must have felt.

Both mothers of two important children, Mary and Aida are one of the same person; Aida Suárez is the Cuban Virgin Mary.

Mary is the ideal woman figure of the Bible. Born an eternal virgin free from sin, she is obedient to every whim of God, humble, and kind. Yet unlike the complacent, submissive Mary seen in stained glass windows and the Bible, Aida is passionate, aggressive, and full of emotion. She is Mary set in a raw reality, raging with sharp motherly instincts and realistic caution. The night of Margarita’s conception, Aida was “hysterical, yelling [at Eduardo], tearing at [him] with [her] nails” (41). She did not yet accept or recognize her future, just having been stolen away from her home, her comfortable sanctuary. But she becomes taken by her husband, Eduardo, and quickly “seduced” (42) by his irresistability, desire enflamed with lust. This is unlike Mary of the Bible, who blindly accepted her fate when she was told by arch-angel Gabriel that she was going to be impregnated by God without
copulating with Joseph, changing life as she knew it.

The first time Aida put Margarita in the water: “she came to life, she grew before [her] eyes. She moved, she smiled, she loved it more than me. She didn’t want my breast any longer. She wanted the water” (40). From that moment, Aida knew that there was something special her: her beloved daughter was fated to be a natural-born swimmer. Margarita is enraptured with joy when she is put into the water, its essence engulfing her entire being. It is her first interaction with the water, which is both a physical and spiritual initiation. This event defines her purpose and solidifies her destiny. She is baptized, or initiated, as Jesus Christ was. Baptized in the River of Jordan, Jesus Christ was immersed in the water as a child by Saint Joseph the Baptist. This purged his soul of evil and freed him from sin, as Margarita’s immersion purged her soul of doubt and made her direction and purpose in life clear. For Jesus it is to sacrifice himself to save mankind from the depths of Hell, for Margarita it is to swim from San Pedro to Santa Catalina and bring honor to her family and her race. But who to guide such talent but her father? Her Father is the supreme authority. In The Cuban Swimmer, Eduardo Suárez is the holder of the megaphone that shouts instruction and direction to Margarita while she is making her way towards the boat. She is directionless without her father, as Jesus is lost without God. The only person Margarita listens to . And when the other Suarez’s get apprehensive and start to panic, it is Eduardo’s sublime voice, like God’s, that is patient and calmly reassuring.

Simon Suarez is his sister’s Simon of Cyrene, helping her through the dark waters and rough winds. He is her brother: they are of the same blood, but are different people with different callings. Margarita is swimming to win pride for Simon and the rest of her family, as Jesus Christ is fighting to save his kin, the whole of mankind. However, because Simon is human, he makes mistakes and sometimes leads Margot into trouble. Simon jokes around and dances, exuding a playful attitude in the midst of this intensity. He guides her, but he does not foresee the “oil slick” (38) that causes Margot to stop the first time. Eduardo calls him an “idiot” (43) and doesn’t “understand [him because] he is not like” Margarita (43), the holy child.

Eduardo’s deprecating attitude towards Simon delves further than what is first seen on the surface. His dislike for Simon replicates God’s own anger towards the human race for even being in a state of mortal damnation and irreparable sin. Therefore, Simon not only embodies the helpful Simon of Cyrene who helped carry the burden of the Cross, but also the entire human race, who are heavenly in image and figure, but remain earthbound.

Margarita Suarez, the unlikely Cuban swimmer from a poor, immigrant family, is the redeemer of new immigrants coming to the USA to start a new life. The negative image the USA unjustly brands them with out of hate and fear is negated by her success, proving herself to be more than the spawn of a vile immigrant, but a talented swimmer and beautiful human being.

Surpassing the unwelcoming racism, Margarita Suarez did more than just a thousand dollars and a gold cup — she has broken through the forced oppression of racism on immigrants. She is the miraculous Jesus Christ, saving immigrants from relentless, reasonless racism and prejudiced restriction. The hundreds watching this race on TV were shown the extraordinary family compassion and effort, transforming their public image from a beastly immigrant family trying to exploit American resources to a true, human family that has true human feelings. The race tore down the border between the white, and people, American or Cuban alike, rejoice in “jubilation” (48). The Suarez family is likened to well-known and revered Christian figures

The Cuban Swimmer and Religion. (2016, Mar 08). Retrieved from https://studymoose.com/the-cuban-swimmer-and-religion-essay 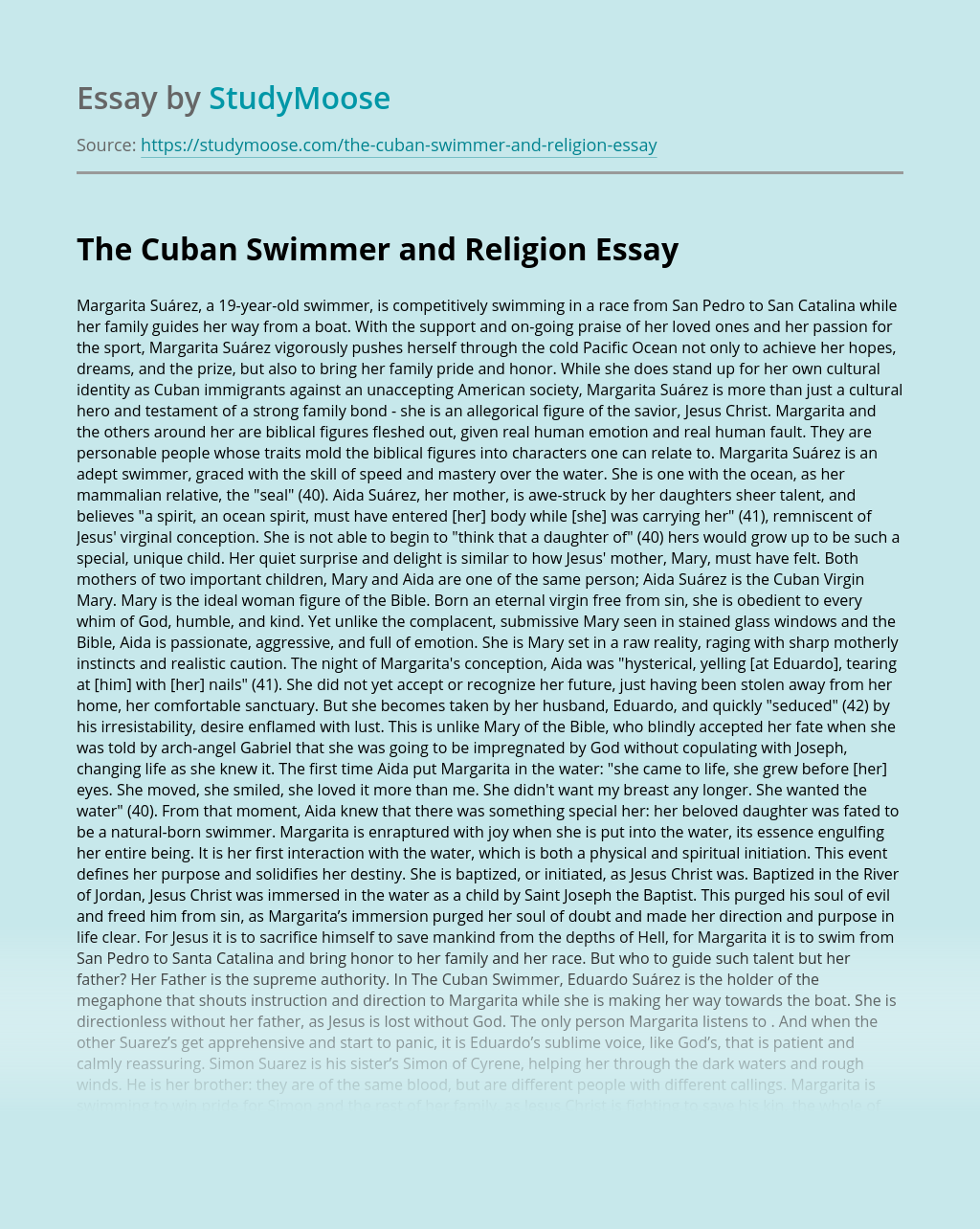