Disrespecting an NCO by SPC BUTLER

On November 21, I received a negative counseling for disrespecting a Non Commissioned Officer, though it was warranted by a series of events I didn’t agree with I should have found a more appropriate way to voice my concerns. The online dictionary defines disrespect as an expression of lack of respect and a fashion that is generally disrespectful and contemptuous. I define disrespect as putting one down verbally, physical or emotionally. In this essay I will be talking about the research I did on article 88 and 91 of the uniformed code of military justice.

Don't use plagiarized sources. Get your custom essay on
“ Disrespecting an NCO by SPC BUTLER ”
Get custom paper
NEW! smart matching with writer

The president does this via an executive order known as the “manual for court martial” (mcm).

The lesser included offenses are lesser included offenses that a military court may still find and accused guilty of. I got off track with explaining the mcm stages but, disrespecting a Non-Commissioned Officer is a touchy and /or susceptible subject. What may appear to one someone as neglect may not appear to another person as being so. In the NCO Creed it says I know my soldiers and will always place their needs above my own. I bring this up for the fact that Non Commissioned Officers should know to step up their soldiers and understand that soldier’s reactions may not always seem as they appear. A soldier’s suggestion may be because it is the best for them. Non-commissioned Officers truly do not know full of what a soldiers needs be. This is not to be interpreted as a sign of indifference just now to be taken how things can be taken by different members reactions and express themselves should not always be taken as disrespect but as how the member conducts them self.

This is where mentorship would come in. I have learned from my mistake and I see why I am to do this essay and that is to show that disrespecting a non commissioned officer will not be tolerated and two give clear understanding of the impact that disrespecting a Non Commissioned officer has on others. For many reasons the Non Commissioned Officers keep the moral up and motivate soldiers and encourage them to do their very best and showing disrespect to the NCO’s not only lowers moral, it also makes it to where the NCO thinks less of the person and lowers the persons’ creditability. There is a possibility of Uniform Code of Military Justice (UCMJ) actions taken against the soldier. With the UCMJ the soldier could lose rank, lose pay, have to pull extra duty, getting discharged, or even getting jail time depending on how bad or sever the violation is.

It could also cause the soldier not to have a chance to exceed or grow as a soldier or a leader such as go to schools, warrior leaders’ course, or even the promotion board. Disrespect also could be viewed by jumping the chain of command or the NCO support channel. Non Commissioned Officers are literately the backbone of the military even as it says in the NCO creed. The NCOs do countless jobs that are not totally acknowledged. Sometimes non commissioned officers help soldiers in many ways and sometimes do not require acknowledgement except to see the soldier strive to success. The NCO corps has to demand respect from everyone lower then them. Because they are the leaders they have to increase moral and to motivate soldiers to do their best. We all have a job to do and we as soldiers we have to know what we are doing and willing to do it. So the moral of the soldiers is important otherwise nothing would ever get done. And with that the NCO also motivates the soldiers. And motivation drives the soldier to do their best and get the task, job, mission done proficiently and in a timely manner.

No matter the circumstance, whether you agree or not, you are not allowed to talk back, physically fight back, or question judgment. The importance of maintaining correct protocol and military bearing on and off duty is essential because to show disrespect to an NCO when in uniform could cause disrespect among civilians about the military in general. Any disrespect towards my leaders, from team leader on up to Sergeant Major of the Army, along with the Platoon Leader on up to the Army Chief of Staff, or the President of the United States, can have a negative effect on the morale and welfare of those around me, junior or senior. If a soldier who is junior to me sees my behavior, he may believe that I, being a Specialist, am right because I outrank him. Then this soldier is also doing the same things I am because he thinks he can.

Now because this behavior has been passed on, the leaders will have a harder time dealing with their soldiers. This should include leaving non work-related issues at home, and away from the workplace because they can get in the way of performing my duties as a soldier, especially when the disagreement is with another soldier, or an NCO. I am a Specialist, a rank earned by showing that I have the knowledge to“specialize” in my field. After reading Article 91 which covers insubordinate conduct towards warrant officer, NCO, or PO. This is broken down rather heavily throughout the article covering as many bases and loopholes as possible it seems. After reading the article I have realized that not only did I disregard or fall under two of the categories in the article but I fall under two of the first three. The first one that I fell under was “treats with contempt or is disrespectful in language or deportment toward a warrant officer, noncommissioned officer, or petty officer while that officer is in the execution of his office.”

Regardless of what I assumed the situation to be I stepped out of line when I proceeded to display unsuitable body language to my NCO. Not only is it being disrespectful in language towards a noncommissioned officer it is breaking the commanders policy on profanity and the use of obscene language. My professionalism is judged and based on dialect and use of a vernacular that can be held to high degree and mimicked by the youth that idolizes those of us whom serve in the armed forces. Not only should I realize that not only do I hold a position which may cause younger children to try to repeat my actions, but I am in one that discipline and respect are held in the highest regards. Who will respect the man that causes other people’s children to disrespect them and/or their teachers? It is one thing to step out of line and become disrespectful to a non-commissioned officer, but to go a step further than that by also violating the commanders policy elevates the situation that much further and puts oneself in an even worse situation than they found themselves to begin with.

Therefore this part of Article 91 should be looked over and understood by all those serving in the armed forces so they know not to trample. Since the dawn of war there have always been select people to lead troops. To give commands that may not always be understood but have to be followed in order to win a battle. Along the way to my conclusion I will give a few examples of how certain things can be perceived as disrespect to a non commissioned officer and the correct way to handle a situation. The number one thing to know about disrespect is that almost anything can be perceived as disrespect though u at the time you may not see it that way. Whenever u are talking to a non commissioned officer no matter the situation always show the proper courtesy and stand at parade rest. Unless you are given the command to relax at this time you are allowed to stand comfortably. While speaking make sure you have an even tone that does not let your anger get the better of you and keep your composure. They may know something about the situation that you may not.

What you don’t know about a situation could get you killed. The information may save a lot of lives, but you have to give them a chance to say what they need to and then perhaps you may understand. Sometimes you may have carnal knowledge about a situation just remember to be tactful and say what you have to and let them decide if the info is relevant to the situation at hand or not . Ultimately the choice is threes. If u still thinks the information is relevant ask to take it up your chain through you non commissioned officer support channel. Always remember to stay tactful and give proper courtesy until given the proper commands. Do not roll your eyes, do not speak with an unsteady tone do not point fingers, do not give an exasperated sigh do not do anything that betrays your anger. When they tell you something do it. The proper answer is yes SGT Roger SGT. It’s not well SGT, maybe SGT, or No SGT.

You can’t cock your eye brows you can’t roll your eyes, you have to pretty much have no facial expressions. You have to look them straight faced not laughing nothing. And now one of the last things about respecting a NCO is the way your voice is towards the NCO. When you talk to someone like I said you have to be like yes SGT, no SGT, roger SGT, and when there talking to you. You can’t have that tone in your voice where it sounds like your trying to retaliate; you can’t have the voice like your trying to be better than your NCO. In conclusion, these are steps to be successful concerning your military bearing.

Disrespecting an NCO by SPC BUTLER. (2016, Sep 23). Retrieved from https://studymoose.com/disrespecting-an-nco-by-spc-butler-essay 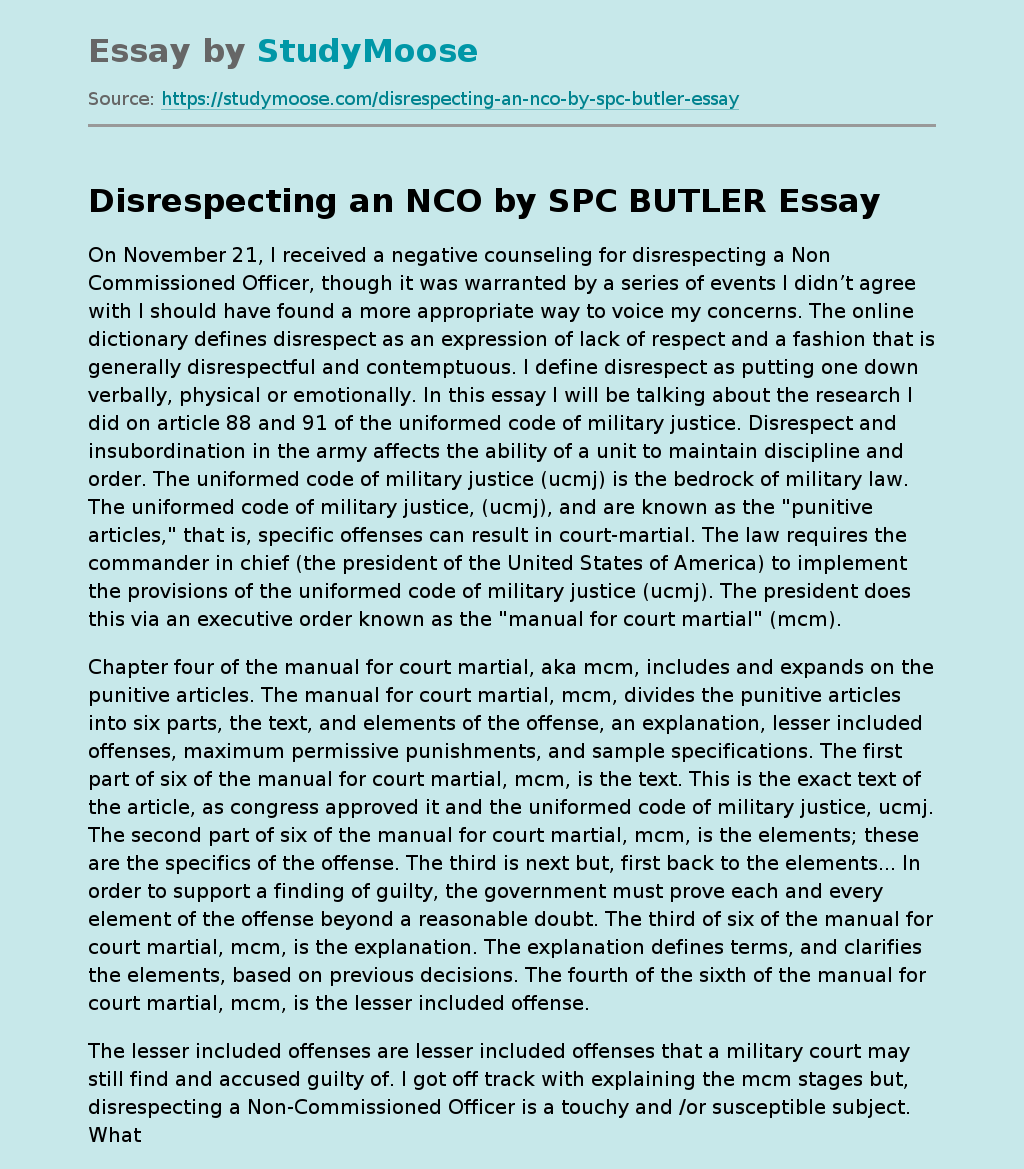