A biographical essay on the life and achievements of Michael Jordan.

Michael Jordan The early years. Michael Jordan was one of five children born to James and Delores Jordan. He was born February 17, 1963 in Brooklyn. The Jordans’ felt that the streets of Brooklyn were unsafe to raise a young family of five children. Instead of trying to endure the streets of Brooklyn, the Jordan family moved to Wilmington, North Carolina. James got a job in Wilmington as a mechanic and Delores got a job as a teller at United Carolina Bank.

Don't use plagiarized sources. Get your custom essay on
“ Michael Jordan – Life and Achievements ”
Get custom paper
NEW! smart matching with writer

The Jordan’s always stressed the value of manners to their children. The above examples typified Michael Jordan’s early years. Michael’s first love. Michael always had an eye for baseball. He played as an outfielder and as a pitcher. When he was twelve, he was the top player in his league. Michael had his picture placed in the Morning Star, which is Wilmington’s newspaper. By the age of fifteen, he wasn’t the star in baseball he once was.

He was still very good, but he had lost some of his focus. Later, in his high school career, he dropped baseball to pursue another interest.

Coach Lynch, Michael’s coach, cut Michael which in turn may have made the best player alive today. Michael then took practicing basketball to another level. He played his brother Larry whenever he could. Michael never expected what would come in the near future. The College Years.

Michael Jordan went to the University of North Carolina as a basketball recruit. Even though Jordan at 6’5″ was a man with potential, he still studied very hard in an attempt to get a good education, while competing in sports. Mike wasn’t expected to be a star of the Tar Heels, since they had players such as James Worthy, Sam Perkins, and Al Wood. By the end of the 1981-82 season, Jordan, as a freshman, was an everyday starter. Carolina reached the Final Four with the help of Jordan, who had sixteen points and led the team with nine rebounds. In the final twenty seconds, Michael made a title winning shot from the left baseline. In Michael’s sophomore and junior seasons, he was voted College Basketball’s Player of the Year. Through Michael’s three years at Carolina, he average 17.7 points per game, while maintaining a “B” average. The Rookie Season. After a great college career, Michael was drafted by the Chicago Bulls as the third pick of the 1984-85 season. Michael quickly signed a $6.15 million contract.

Michael made a huge impact in the National Basketball Association. He made such an impact that he was selected to be an alternate on the Eastern Division All-Star squad. During his rookie season with the Bulls, companies started picturing Jordan on posters and on television. Jordan led the Bulls to a 38 win and 44 loss season. Jordan averaged 28.2 points per game, while setting a team record with 2,313 points. He won the Schick Pivotal Player of the Year Award, Seagram’s NBA Pivotal Player of the Year Award, and the honor of Rookie of the year. Michael and Endorsements. With Michael’s growing success in the NBA, more and more companies wanted to use the “Air Jordan” name. One of the first companies to use his name was Nike.

Nike paid Michael $2.5 million, so they could begin a line of shoes known as “Air Jordan’s.” Nike sold 2.3 million pairs for $65. Other companies would attempt to endorse Jordan. These companies include Coca-Cola, Wilson basketballs, McDonald’s, Excelcior Internantion (Time Jordan watches), Wheaties and Gatorade to name a few. Most Valuable Player. During the 1987-88 season, Jordan raised his game to another level. The Bulls status was also raised to another level with the additions of Scottie Pippen and Horace Grant. Michael was having another great season and this was evidenced when he started on the Eastern Division All-Star squad. During the All-Star games Jordan won the slam-dunk contest. Read also Is Michael Jordan an entrepreneur

He then finished the season, leading the Bulls in scoring for 81 games out of the 82 game season. Michael averaged 35 points per game. For his efforts, Jordan was selected as the Most Valuable Player and as Defensive Player of the Year. The First Championship. During the 1990-91 season, Chicago went on a rampage. The Bulls had 61 wins and 21 losses, which was the best record in franchise history. Michael averaged 31.5 points which won him his fifth scoring title. The Bulls reached the NBA finals for the first time in Jordan’s career. The Bulls faced the Los Angeles Lakers which was called a dream matchup between Michael and Magic Johnson.

Chicago won the series rather easily. Jordan was voted Most Valuable Player of the finals. Jordan Quits Basketball. Michael Jordan announced after winning his third consecutive NBA championship, that he was stepping down from the game he loved. He said that he was tired of the pressures. Some people believe that Jordan’s gambling debts caused Jordan to quit. Others believe that the slaying of his father which happened on August 15, 1993 caused Jordan to quit.

There is one final theory.

The theory is that Michael wanted to pursue one of his childhood dreams, professional baseball. Michael and Baseball. Michael Jordan announced that he would pursue his dream of playing baseball. Jordan joined the Chicago White Sox organization. The White Sox gave Jordan a tryout and then decided that he would be best playing with the Birmingham Barons. When Mike hit his first home run on July 30, he pointed to the sky honoring his father. However Jordan struggled in baseball, with a horrible average. Jordan would soon be back to the game he loved. He’s Back. After spending 17 months away from the game he loved, Michael Jordan came back on March 18, 1995. Although he was back, number 23 was not back. Jordan came back as number 45. In his first few weeks back, Jordan’s shot was off, although his superb leadership was back.

In one game Michael showed flashes of his old self. Michael scored 55 points in a game at Madison Square Garden in New York. A few weeks later, Michael, a very superstitious man, switched his number from 45 to 23. Although the Bulls were defeated by the Orlando Magic in the playoffs, the Bulls went on their best winning streak of the season. Accomplishments. Michael Jordan has been called the best basketball player ever by Magic Johnson. Jordan has led the NBA in scoring an amazing seven times. Jordan is only the second player to score 3000 points in one season, with the other being Wilt Chamberlain. Mike was voted Defensive Player of the Year in 1988. Jordan has been Most Valuable Player of the NBA finals three times. He was Sports Illustrated Sportsman of the Year in 1991. Jordan has also received three MVP awards between 1988 and 1992. 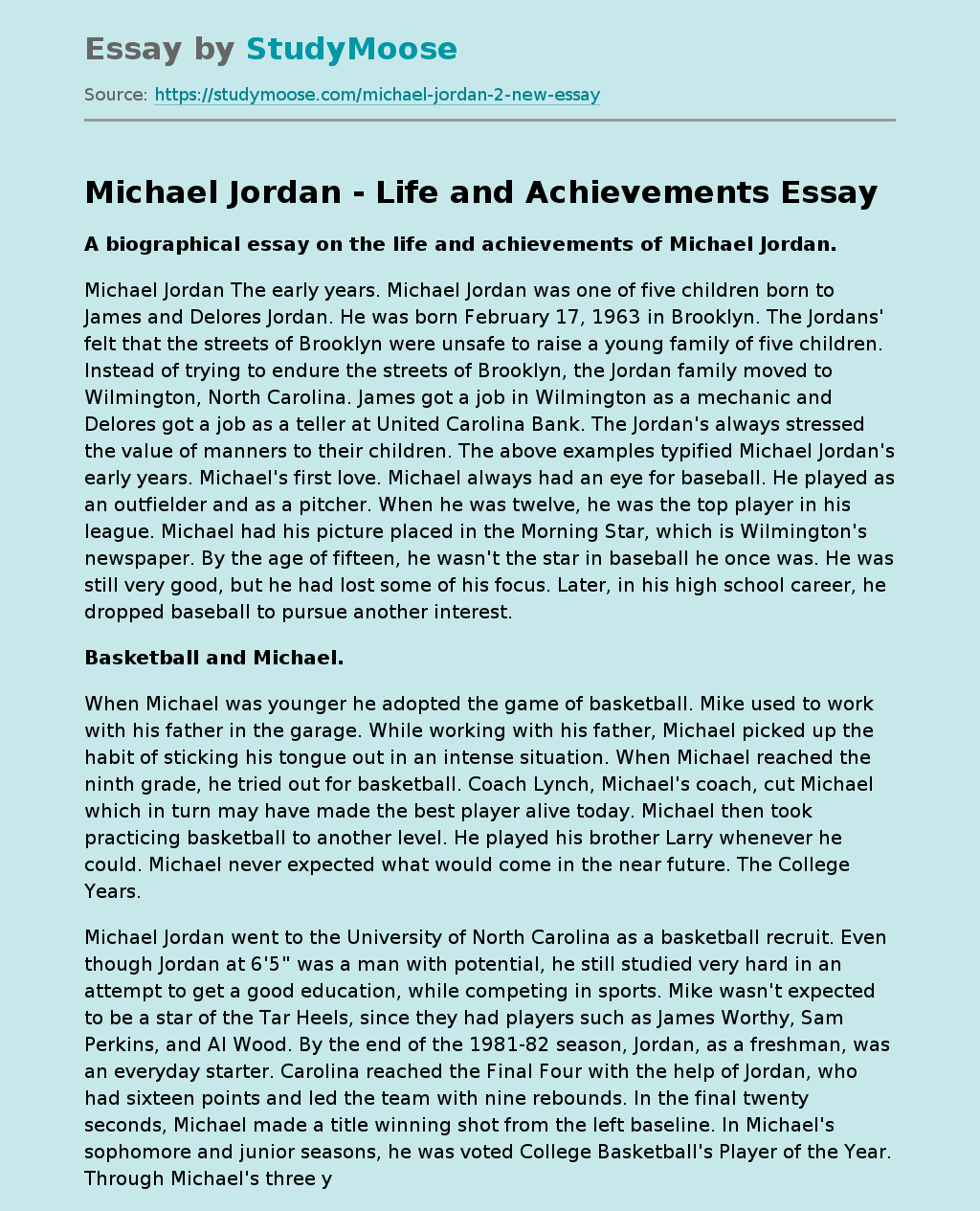