The sport of basketball was invented by Dr. James Naismith in 1891. As the sport developed, players came and went, but a few legends remained. Of those legends, Michael Jordan is one who will always be remembered. One of the remarkable characteristics of Jordan was his hard work and effort. He played numerous sports as a kid, and baseball was his favorite sport. Even though baseball was his primary sport, he did play basketball and football, too. Both of his parents influenced him in a positive manner.

Don't use plagiarized sources. Get your custom essay on
“ Michael Jordan. a Hero? ”
Get custom paper
NEW! smart matching with writer

His father brought out the rough side of Michael by teaching him to work hard and not to be tempted by the street life, while his mother brought out the loving side by teaching him how to sew, clean, do the laundry, and other chores at home (Michael Jordan Biography). His love for basketball developed as he kept losing to his elder brother in pickup games, but he fought to become better. Jordan played for Laney High School, and ironically was cut from the varsity team when he was a sophomore.

Rather than giving up and accepting failure, he accepted it as a challenge to improve. Whenever I was working out and got tired and figured I ought to stop, I’d close my eyes and see that list in the locker room without my name on it, and that usually got me going again” (Michael Jordan’s Biography). As this all-star fought long and hard, he made his school team and eventually led them to win the state championships.

His determination and spirit proved how, although he was not yet famous, he was on his way. His training never stopped, he never gave up, and he practiced hard until he became the best. A legend was in the making. Upon qualifying and reaching the NBA, Michael displayed his unique qualities.

He was the overall third draft pick in 1984, behind Hakeem Olajuwon and Sam Bowie. The Bulls’ games lacked support from their fans, and they believed that they might even go out of business. To their advantage and surprise, Michael Jordan brought everyone back to their games and created a new world of basketball (Berger 61). In total, Michael scored over thirty-two thousand points averaging about thirty points per game. He played his position as a guard well, but was great on defense too. He grabbed over two thousand steals and eight hundred blocks in a span of nineteen years (Michael Jordan’s Biography).

Another remarkable quality was his high intensity and hyper-competitiveness. As a rookie in the NBA, most people did not expect Michael to go so far. He worked hard with one of the best coaches of all time, Phil Jackson, and led his team along with him (Stein). His opponents believed that it was not even fair to play against him since he was unstoppable. One of his opponents, Michael Cooper from the Los Angeles Lakers, said, “There’s no way I can stop him. As soon as he touches the ball…He goes right, left, over you, around and under you.

He twists and turns. And you know he’s going to get the shot off. You just don’t know when and how” (Berger 68). This proves how Michael gave an impression of an almost a God-like man when he played. Finally, Michael proved his great abilities in basketball through his teamwork and attitude. In 1990, the second round of playoffs between the Bulls and the Pistons was off to a bad start. The Pistons led series 2-0 making it look easy, but Michael took control. He gave a speech to his teammates about their weaknesses forcing them to realize what they lacked.

This speech hit everyone hard, but Scottie Pippen heard the message loud and clear when he said that Michael gave a, “wake-up call for us,” (Gutman 62). At the next game, Michael kept his game at a regular scoring of forty-seven points, but Scottie chipped in equally well with twenty-nine more. In game seven, Scottie came down with a migraine and the Bulls lost the series, proving that he was also a valuable player to the team. Michael and Scottie worked together for the remaining years of Michael’s career and eventually, the duo won the championship for three straight years.

As for Michael’s attitude, he was a leader as well as a critic He had a stern approach towards other players, but helped players like Scottie to reach their heights. When watching his games, he tried to distract his opponents by his comments or derogatory remarks. Once when a player became angered at Michael’s behavior, he dared him to shoot a free throw without looking at the goal. Not knowing that Michael had practiced that before, he watched in awe as Michael swished a free throw with closed eyes. Another aspect of Michael’s mind-set was his stern beliefs.

Upon retiring, he said that he would play for no one except his coach, Phil Jackson. (Michael Jordan’s Biography). Although, fans, teammates, and opponents may not have liked his behavior, all of the aforementioned qualities combined to create the legend that he is today. Michael Jordan, number twenty-three, retired in 2003, after playing a season for the Wizards. He built numerous players during his career and gave basketball a new definition and perspective. Another all-star, Larry Bird, acknowledged Michael’s greatness when he said that he had just played against a team that had “God disguised as Michael Jordan” (Gutman 48. ) 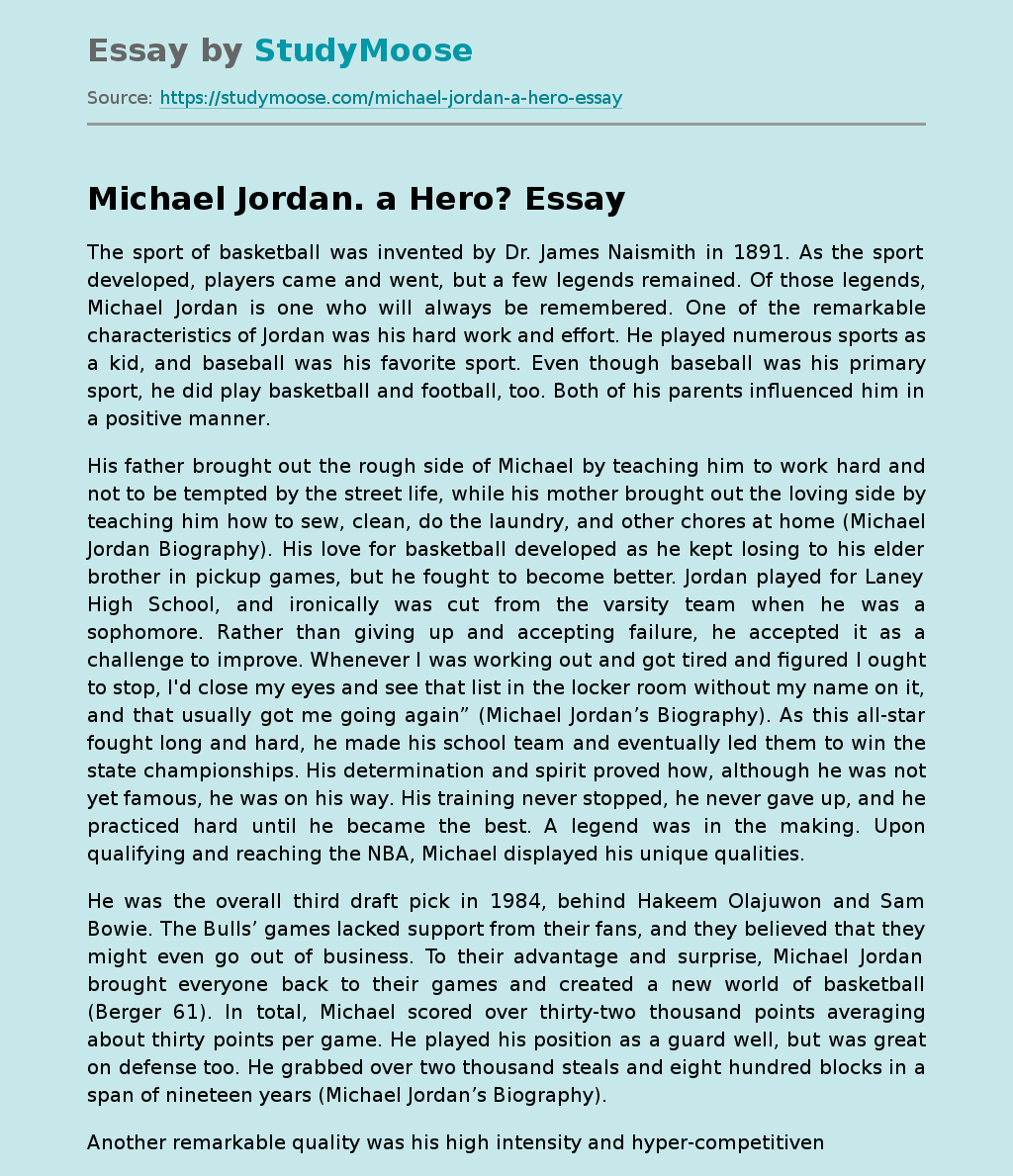