At the age of 33, Jordan had played only 10 seasons while Bryant has played 16. Two of those seasons for Jordan saw him playing in less then 20 games. While Jordan left North Carolina after his junior season, Bryant entered the league right out of high school. Therefore Bryant basically has a three-year head start on his NBA career. Jordan only played 15 seasons compared to Bryant’s 16 yet he scored nearly 3,000 more points, 800 steals, 300 blocks, 200 assists and 500 rebounds. Bryant has played in 89 more games than Jordan.

Don't use plagiarized sources. Get your custom essay on
“ Kobe Bryant vs Michael Jordan ”
Get custom paper
NEW! smart matching with writer

One more stat to throw at you: Jordan shot 49. percent from the field for his career while Bryant has shot only 45. 3 percent. Maybe you don’t like stats. Maybe you feel trophies on the mantle judge greatness. Jordan led the league in scoring 10 times. He led the league in steals three times and also was named the Defensive Player of the Year once. Also let’s not forget his five regular season MVPs and his six NBA Championships to go along with his six Finals MVPs.

Bryant has led the league in scoring twice, and while he has been named to an All-Defensive team 12 times, he has never won the Defensive Player of the Year.

While he has won five NBA Championships, he has only been named the Finals MVP twice. Bryant won the regular season MVP once. So Jordan has the edge in the stats as well as the trophy count. He also did the unthinkable and came out of retirement twice. His first retirement nearly lasted two seasons while the second last three years.

Now while I pointed out errors in the video, the biggest error it made was show not how great Kobe Bryant is but how great Michael Jordan was. They say imitation is the greatest form of flattery and the video clearly shows that Bryant has tried his best to be like Mike.

I know this article won’t end this debate. While is easy to prove Jordan’s greatness now, in a few years Bryant will or should hold the edge in every statistical category. Also with the additions of Steve Nash and Dwight Howard, he could surpass Jordan in the title count. Whatever happens over the next few years, one thing won’t change. In my opinion Michael Jordan is not only the greatest shooting guard but is by far the greatest player I have ever seen, but that is just my humble opinion. 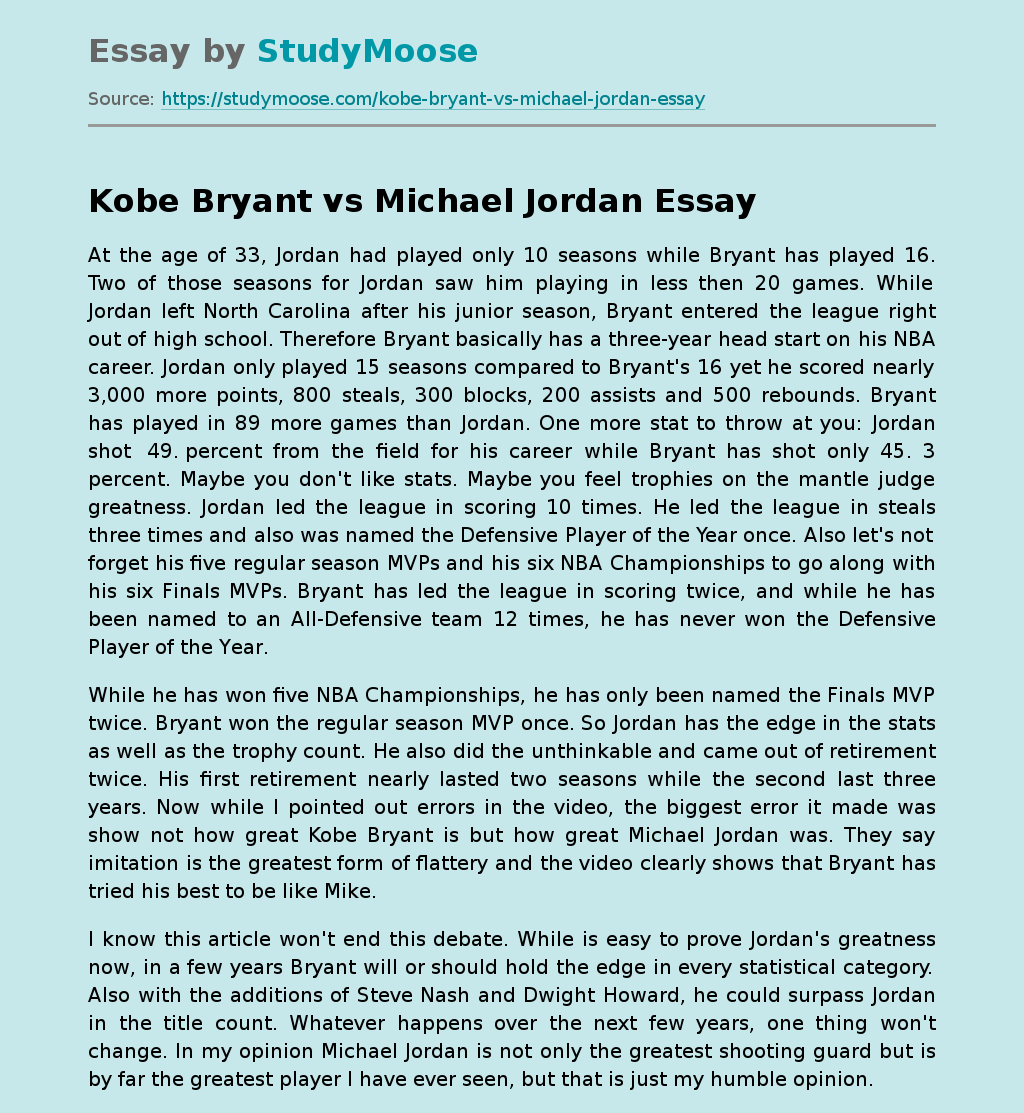