Hall of Fame consists of legends of the past that will never be forgotten. As the president of the NBA, I would like congratulate Kobe Bryant as he’s been selected into the NBA Hall of Fame. The Black Mamba is one of the deadliest, fastest, and most feared snake in the World today. That was the description of 6’7ft 210lb Kobe Bryant on the court since he joined the league right out of high school. His nickname tells it all and no man in today’s culture has been more polarizing: He is either loved or hated but all have an opinion: whether good or bad nobody can deny knowing his name and what he does.

Don't use plagiarized sources. Get your custom essay on
“ Kobe MVP Speech ”
Get custom paper
NEW! smart matching with writer

He has competed for more Championships than anyone still playing in the league and is known as the best finisher in the league. He takes pride in his craft and has produced even when wounded. Just like the most deadly snake, Kobe Bryant, aka “The Black Mamba” is the most feared player on the court.

There is only one man in sports today that can lay claim to all of this and his name is none other than Kobe Bryant. Just like the snake, Kobe Bryant can strike from anywhere on the court. His superior fundamental skills and his willing-ness to take over the game has been his specialty.

All Kobe’s career, he’s been having jaw-dropping performances. 81 point performance against the Toronto Raptors in 2006, second ALL time scoring performance behind Wilt Chamberlains 102 points.

The Black Mamba had his first back-to-back championship rings in 2000 and 2002. Then went on with his second back-to-back feat with Pau Gasol 2008 and 2009. After getting swept in the playoffs by the Mavs in 2010, Kobe came back hungrier then ever… Winning the next 2 NBA championships to cap off his great career.

Kobe had many challenges and showed the doubters he is better than Michael Jordan and other competitors. Kobe Bean Bryant was compared to Michael Jordan since day one due to his similar killer instincts. At first, many “Kobe” haters dismissed Jordan’s comparison due to Kobe’s lack of championship rings and leadership. However, he turned the doubters into believers after his clutch performances against Lebron James’ Heat in the championships for his 6th and 7th rings. : Not only his numbers told it all, his professionalism and his rigorous conditionings make him the best today.

Kobe had his up and downs in his career. During Lakers down years after Shaq left for Miami, he showed his immaturity by asking for a trade. He was frustrated due to lack of supporting cast while he managed to put up 36 points per game shooting 47 percent that year. Kobe’s maturity was questioned, however in his last 6-7 years of his career, he showed impeccable leadership and professionalism. His consistent workouts during summer and during season managed him to play few more seasons.

He showed leadership skills while, playing with the Team USA and bringing home the GOLD at the 2008 Olympics. The Black Mamba, will be remembered as the greatest basketball player in the World. Ladies and Gentlemen: Kobe Bean Bryant with 7-championship ring will go down as the one of the LEGENDS of the world. He is well known through-out the world and he has the credentials. As you can see, Kobe Bryant, and his fierce competitive nature and his clutch after clutch performances, has climbed his Mount Everest of National Basketball Association and is now, a member of the NBA Hall of fame. 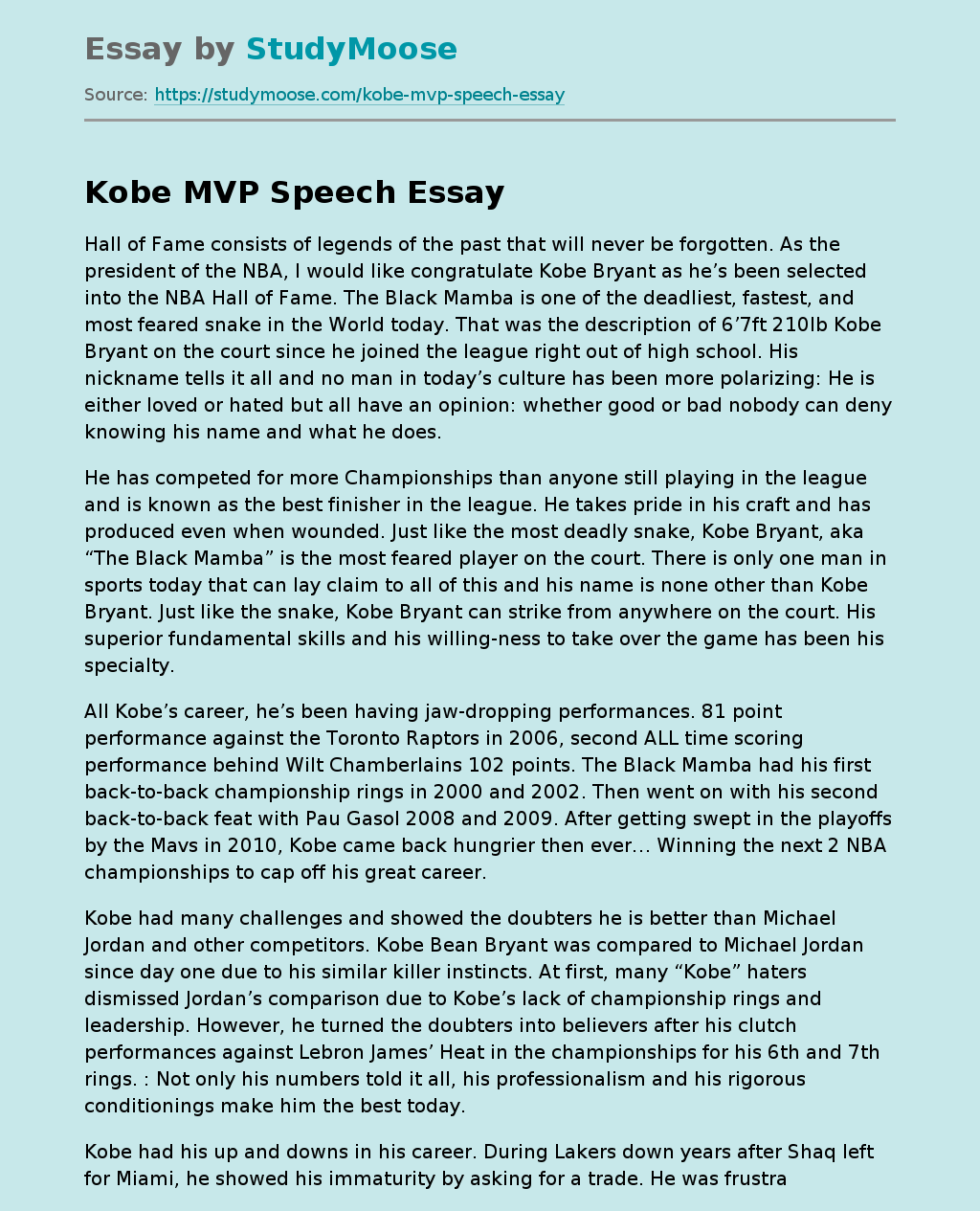