Spirituality in A Poem Thanatopsis by William Bryant

The poem, “Thanatopsis,” written by William Cullen Bryant, is a wonderful literary work which explores the often controversial questions of death. Within his well written lines Bryant attempts to show the relationship between death’s eternal questions and the ongoing cycle of nature and life. Upon concluding the poem many readers are able to reaffirm their faith of an afterlife, while others are left aimlessly pondering this strange possibility.

Throughout the poem Bryant creates images which connect death and sleep. In fact, once the reader gets halfway through the poem they discover that Bryant uses these words almost interchangeably.

Don't use plagiarized sources. Get your custom essay on
“ Spirituality in A Poem Thanatopsis by William Bryant ”
Get custom paper
NEW! smart matching with writer

In the second stanza he writes, “All that tread the globe are but a handful to the tribes that slumber in its bosom.” Instead of referring to death he uses the word “slumber.” These connections continue in a number of places. Other examples include lines 57 and 66. In line 57 he writes, “In their last sleep the dead reign there alone,” and in line 66, referring to death and burial, Bryant writes, “And make their bed with thee.

” This connection between death and sleep creates an intriguing metaphor which adds depth and meaning to the poem.

By using this strange metaphor I believe Bryant wishes to suggest his faith in an afterlife. While examining the differences and similarities of death and sleep the reader is left with some very thought provoking questions. The answers to these questions reassure some readers while confusing others. Sleep is a time of rest. It allows preparation for the next day or event, and by relating this definition to death Bryant gives new insight on one’s fate after earthly existence.

When identifying sleep with death Bryant gives death many characteristics of slumber. People generally wake from sleep, and Bryant expands this occurrence to death.

Death could simply be a time of rest that retires the bodies’ of earthly beings, and allows the soul to wake. Upon waking the soul is freed, and enters a new plane of existence. This idea of a spiritual awakening is demonstrated in “Thanatopsis.” In lines 50 and 51 Bryant writes, “Take the wings of morning, pierce the Barcan wilderness.” To me, the wings in this statement symbolize a spiritual, angelic being, and the morning suggests a time of waking. After waking, the angelic being breaks through the confinement of the human grave, and continues its existence elsewhere. In my opinion these lines indicate Bryant’s belief in an afterlife.

After reflective meditation in the wilderness Bryant comes to terms with death. He knows death is a conclusion to the material world, but in this conclusion is a type of rebirth. Bryant believes death prepares the soul for its next journey. With this belief he is put at ease, but I cannot say the same for myself. I am truly confused about the subject. It is a source of great frustration for me. I, like many people, talk about the possibility of an afterlife, but it seems rather pointless. I spend countless hours pondering a question that shall never be answered in this lifetime.

In addition, I realize death, along with being the end of the earthly life, is an end to all earthly traits. The afterlife begins following death, and cannot contain earthly characteristics. Therefore, it is illogical for me to attempt the comprehension of an afterlife. Even if it exists it is still impossible for me, as a living person, to understand or fathom.

Spirituality in A Poem Thanatopsis by William Bryant. (2016, Jun 19). Retrieved from https://studymoose.com/spirituality-in-a-poem-thanatopsis-by-william-bryant-essay 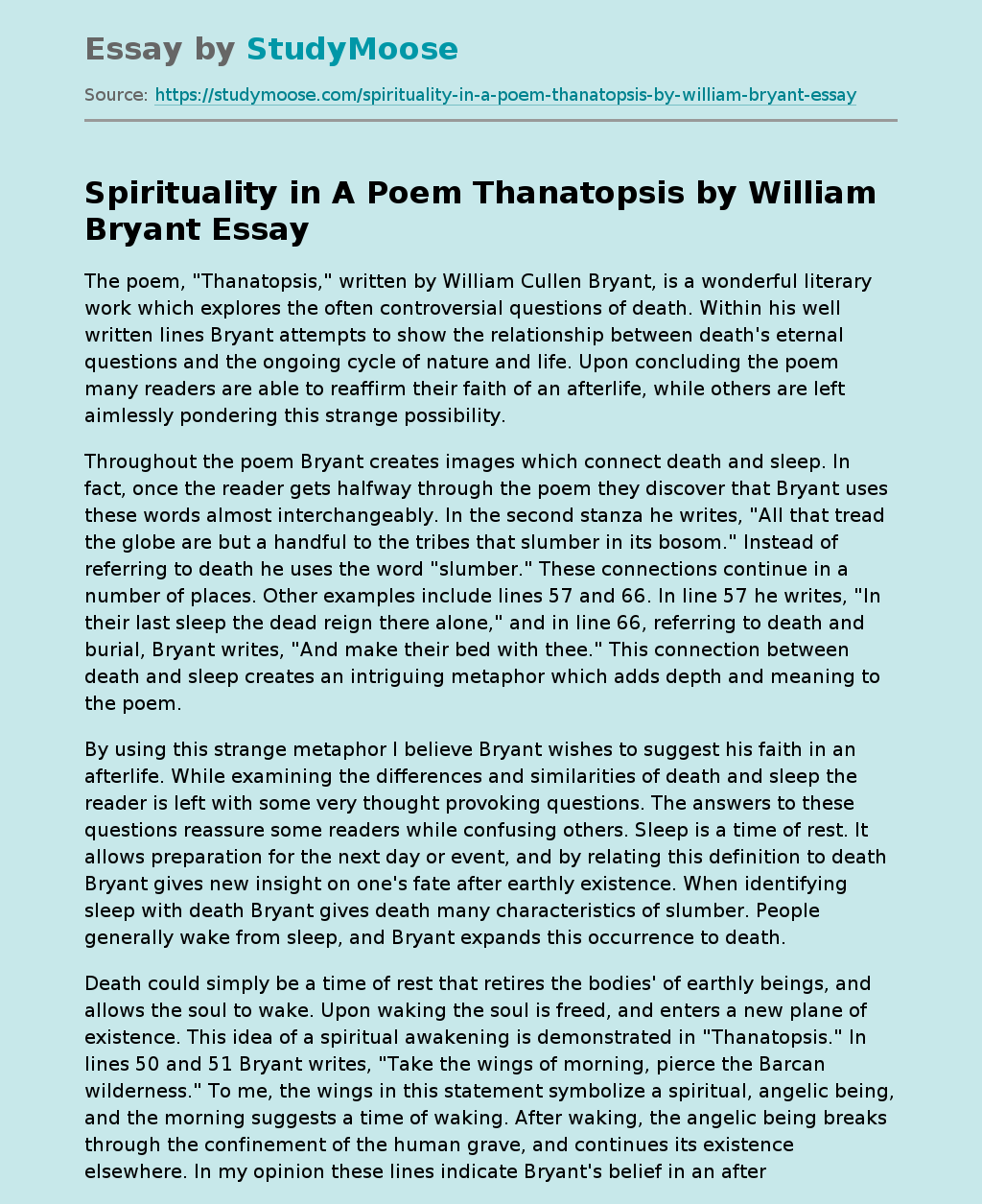