Michael Jordan and Kobe Bryant are two of the greatest basketball players to ever live. The way they play the game is memorizing. These two athletes are very extraordinary, though only one can be called the greatest of all time. The debate still and will always continue on who is the best. On one hand, there is the 6 time NBA champion in Michael Jordan; in the other there is the phenom who scored eighty- one points in one game, Kobe Bryant.

Don't use plagiarized sources. Get your custom essay on
“ Michael Jordan and Kobe Bryant ”
Get custom paper
NEW! smart matching with writer

In my opinion, Michael Jordan is and will always be the greatest basketball player to ever play the game. When I think of the word, “legend”, only one name comes to my mind and that name is Michael Jordan. Even the president of the United States thinks MJ is the better choice. “Oh, Michael,” the lifelong basketball fan told The Associated Press “I mean Kobe’s terrific. Don’t get me wrong,” Obama said of the four-time NBA champion.

“But I haven’t seen anybody match up with Jordan yet”.

Michael Jordan tops Kobe Bryant in many ways, such as: offense, defense, and overall career achievements. In today’s generation of basketball superstars, there is one distinguished player, Kobe Bryant that holds a reflection to another known superstar, Michael Jordan in his ability to play the game, offensively and defensively; however, they differ in their overall performances. Although sports fans attempt to compare the two players, many will agree that Michael Jordan carries the best offensive and defensive numbers, while Kobe Bryant holds the title of the youngest all-star to ever enter the National Basketball Association.

Both Jordan and Bryant were offered huge endorsement deals, with Kobe Bryant taking the lead as one of the largest global brands, in basketball history. The game of basketball is a rewarding sport that allows its players to give back to the community. There is no competition, when it comes to giving back to the community, as each player is equally involved in charitable organizations. In the professional basketball world, sports fans will agree that Michael Jordan is the better player, while other fans are loyal to Kobe Bryant. When looking at offensive and defensive numbers, objectivity and a hard look at the facts leaves one conclusion without a doubt, that Michael Jordan is one of the greatest players in NBA history. He is famous for blocked shots, rebounds, and scoring an average of 30 points per game, during his career (Squidoo, 2012). 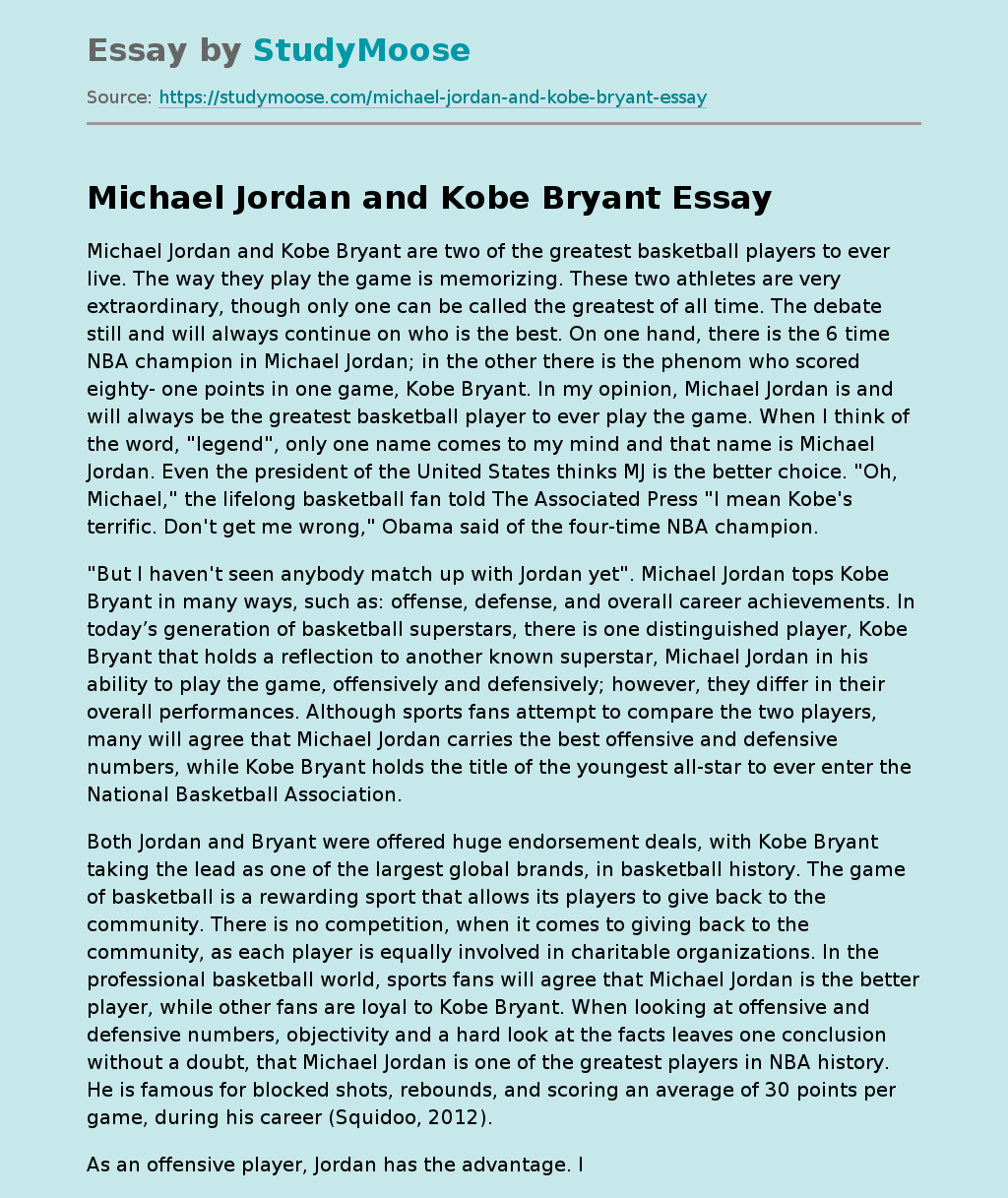