Character analysis of John Ryan from the movie "Crash"

I will be analyzing the character of John Ryan who is played by Matt Dillon. Ryan is a white middle-aged police officer who has been with the force for quite some time. He appears to be racist from his many encounters with the black characters. From the beginning of the movie, you can tell John is an arrogant person. He seems to feel like he is superior to the other characters. This is displayed in the way he carries himself and the way he condescends to pretty much every other character he interacts with.

Turn in your highest-quality paper
Get a qualified writer to help you with
“ Character analysis of John Ryan from the movie “Crash” ”
Get high-quality paper
NEW! AI matching with writer

Minorities such as blacks, Hispanics, and Middle Eastern ethnicities are the groups most often stereotyped in the media. The movie used stereotypical characters so they would be easier to understand or identify with. John interacts with other officers of minority but he seems to have some respect for them because they are a part of his most prominent social group, the police. The other major characters he interacts with are a white officer named Tom Hansen (played by Ryan Phillipe) and a black couple named Cameron and Christine Taylor (played by Terrence Howard and Thandie Newton).

He has a real disdain toward blacks because of the way minority owned businesses received preferential treatment from the government which caused his father’s business to fail.

Ever since John’s father’s business went under, every offense a black person commits continues to reinforce John’s misconception of the black population. Instead of just seeing the person who commits a crime, he sees a black person who commits a crime. He assumes the reason they commit crimes is because they are black and he looks for reasons to hurt or insult any black people. John Ryan is the part of middle America that propagates the race war because he is influenced by the media and lacks the knowledge or understanding of the races different from his own. This is close to a parallel of C.P. Ellis’s and Ann Atwater’s relationship with one another, where once they realize that they aren’t so different they become good friends.

Character analysis of John Ryan from the movie "Crash". (2016, Sep 18). Retrieved from https://studymoose.com/character-analysis-of-john-ryan-from-the-movie-crash-essay 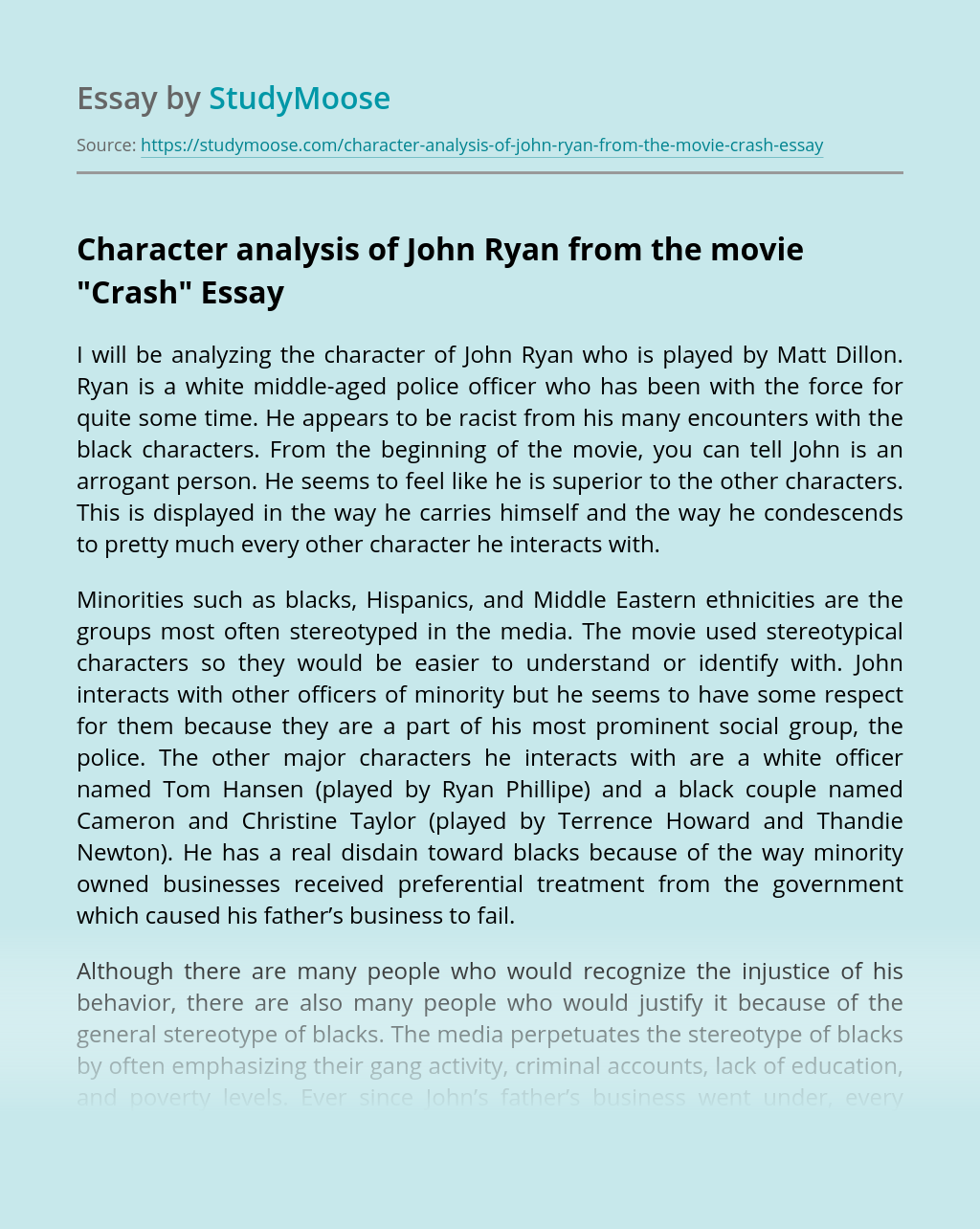 Turn in your highest-quality paper
Get a qualified writer to help you with
“ Character analysis of John Ryan from the movie “Crash” ”
Get high-quality paper
Helping students since 2015
Stay Safe, Stay Original