John Proctor as a Tragic Hero in The Crucible

Ice T once stated, “I think everybody wants to redeem themselves after they’ve done something that might be considered negative. I don’t think anyone wants to go to the grave negative.” In the play, The Crucible, by Arthur Miller, the town of Salem is in a crisis due to the accusations of witchcraft. One of the accused is John Proctor, who is a strong and noble farmer. In Arthur Miller’s drama, The Crucible, John Proctor is portrayed as a character who contains all the six characteristics of a tragic hero.

Don't use plagiarized sources. Get your custom essay on
“ John Proctor as a Tragic Hero in The Crucible ”
Get custom paper
NEW! smart matching with writer

Miller’s characterizes his protagonist, John Proctor, as committing hamartia, because of his lustful affair with Abigail Williams, which leads to his downfall. In the beginning, Proctor commits adultery which sparks hysteria about the witch trials in the community. Abigail shouts, “You loved me, John Proctor, and whatever sin it is, you loved me yet!”(I. 206). Proctor describes to Abigail that he cannot love her anymore and later results in his reputation getting ruined.

Abigail blatantly tells lies in the community and this causes Proctor to be thrown into jail. His loved ones also face trouble with the court because Abigail describes that they participated with witchcraft.

Miller characterizes John Proctor as a tragic hero through nobility by demonstrating his superior wisdom over the other citizens of Salem. The term nobility means the hero gains superiority by birth, or by way of knowledge, wit, and strength of character. In the play, Proctor is depicted as an educated and hard-working farmer in the village.

Miller writes, “Proctor [is] respected and even feared in Salem, has come to regard himself as a kind of fraud”(576). His reputation throughout the community is very good and people give him respect. Proctor is a truthful man fighting for his pride and wrongly accused death.

Anagnorisis is conveyed by Miller when John Proctor chooses to sacrifice his life, dying with pride and dignity. The term anagnorisis means the transition from ignorance to the knowledge that leads to the resolution of the story. In the play, John Proctor rips his paper which had his confession and then later gets accused. Proctor shouts, “because it is my name! Because I cannot have another in my life! Because I lie and sign myself to lies! How may I live without my name? I have given you my soul; leave me my name!”(IV 288) Proctor cry’s out that he only has his name left and takes great pride in it. His reputation in the village has already been destroyed and believes that he should have his name as the real truth.

Miller utilizes the character, John Proctor, as a tragic hero through the catharsis by demonstrating him as prideful when his wife weeps near his death. The term catharsis means the purging of feelings or an emotional discharge. At the end of the play, John Proctor is accused of witchcraft and is subjected to be hanged. Proctor has decided to go against corruption from the court and gains acknowledge from his wife when she mentions, “He have his goodness now. God forbid I take it from him!”(IV. 305). Elizabeth knows that Proctor has turned into a good man and that he represents the symbol of purity.

Miller uses the character, John Proctor, as a tragic hero through peripetia when his loved ones get in trouble with the court. The term peripetia means the sudden reversal of fate that afflicts the hero as a result of their tragic flaws. In the beginning, Proctor faces an unfortunate series of events when he gets into an affair with Abigail Williams and mentions that later he cannot love her anymore. Abigail then becomes vindictive and begins to spread lies about his wife. She accuses Elizabeth of “blackening [her] name in the village! She is telling lies about me! She is a cold, sniveling woman, and you bend to her!”(I 203). Proctor does not testify against Abigail so he can prevent his name from getting blackened in the community. He takes great pride in his name and would rather follow his conscience. The hubristic mindset that Proctor has caused his downfall, which is the true meaning of a tragic hero.

Another stage of the tragic hero, hubris, is demonstrated in John Proctor when he has only his name to tell the truth. The term hubris means the hero’s excessive pride and disrespect for the natural order. Proctor does not like the court system and goes against it. Proctor shouts, “I see none dyin’. This society will not be a bag to swing around your head, Mr. Putnam”(I. 242)

John Proctor as a Tragic Hero in The Crucible. (2020, Sep 18). Retrieved from https://studymoose.com/john-proctor-as-a-tragic-hero-in-the-crucible-essay 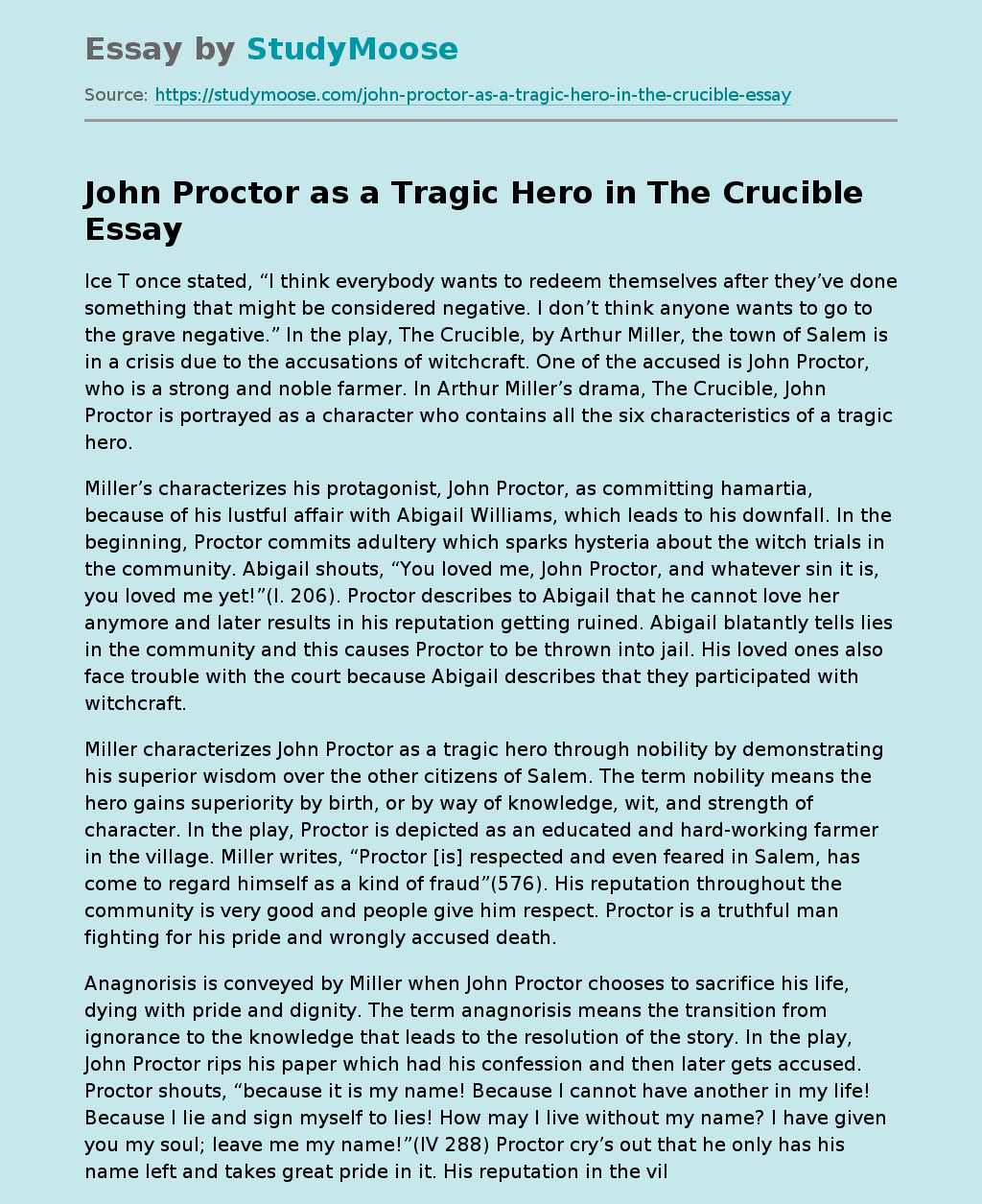