Mass hysteria is a condition affecting a group of people, that is characterized by irrational behaviors or beliefs, or unexplainable causes of illness. For example, The dancing plague of 1518, The mass hysteria in Brunei, and The Salem Witch trials are outbreaks of mass hysteria. Each of these historical examples have had a group of people that have been affected by the same symptoms, irrational behaviors, or unexplainable causes of illness. The dancing plague of 1518 was a case of dancing mania that occurred in Strasbourg, Alsace in July 1518.

Turn in your highest-quality paper
Get a qualified writer to help you with
“ The Crucible – Mass Hysteria ”
Get high-quality paper
NEW! AI matching with writers

Numerous people danced for days without stopping over the period of about one month. The outbreak began in July when Frau Troffea began to dance on the street. Within a month about 400 people were dancing also. Concerned nobles seeked help of local physicians to find a cause of the unusual dancing.

The physicians announced that the plague was a natural disease caused by hot blood. Eventually, some of the people died from heart attacks, strokes, and exhaustion.

Incidents of mass hysteria occurred at two all girls seconday schools in Brunei. The girls affected by this phenomenon claimed to have been possessed by spirits. These students started to scream, shake, and cry out of the blue. The cause of this mass hysteria is still unknown. The Salem Witch Trials was also an outbreak of Mass hysteria. These trials were a series of hearings and prosecutions of people accused of witchcraft ( use of alleged supernatural, magical faculties) in colonial Massachusetts in the 1690’s. The mass hysteria in the salem village started when two young girls (daughter & niece of Reverend Samuel Parris) started to show cryptical behavior.

Other young women started to show similar behavior. Salems inhabitants started to believe that the cause of these cryptical behaviors was ‘witchcraft’. Mass hysteria made a negative impact on this society. Many societies are impacted by irrational fears. An irrational fear is a type of fear that an individual experiences that does not necessarily have any basis behind it. Societies unite to critique and make threats vanish. For instance, in The Salem Witch Trials the town people were trying to get rid of witches.

They accused, tortured, & murdered people who were believed to be performing acts of witchcraft or making deals with Saten. In todays society, groups of people appropriately called homophobs will come together as a whole to protest the sexual preference of other people. The discrimination of others may lead to more people believing that it is correct to judge others which in turn could hurt more human beings. There is really no way to alleviate this problem. When somethings going to happen, we can’t stop it from happening. We just have to learn from the mistakes & never repeat it again. 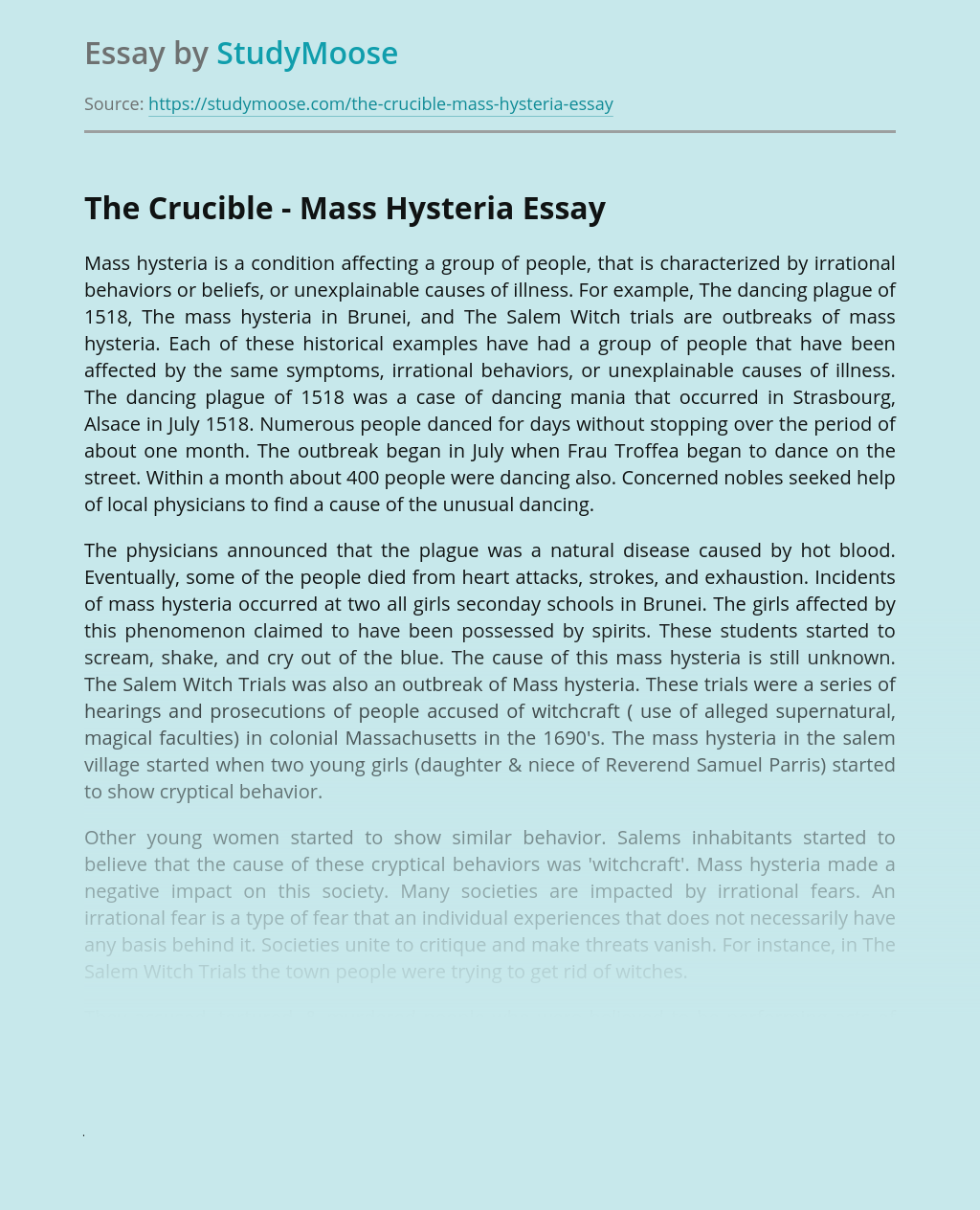 Turn in your highest-quality paper
Get a qualified writer to help you with
“ The Crucible – Mass Hysteria ”
Get high-quality paper
Helping students since 2015
Stay Safe, Stay Original