Some groups marginalised within society

People are marginalised in society by feeling devalued and labelled. Minority groups such as the unemployed, psychiatric patients, people with disabilities both intellectual and physical, prisoners, ethnic groups, and the gay and lesbian community are often discriminated against (Fullagar, 2002

One of the most vulnerable and marginalised groups in society are people with an intellectual disability they often face feelings of fear, guilt, in addition to physical barriers and limitations. People with developmentally delayed need a wide range of leisure programmes to choose from.

Don't use plagiarized sources.
Get Your Custom Essay on Some groups marginalised within society Just from $13,9/Page

The principle of Normalization has led to equal rights for people with special needs. Providing people with inclusive leisure programmes with non-disabled persons assists with their socialisation. However, lack of tolerance in the community at large, financial constraints, difficulties in accessing transport as well as skill deficiencies can inhibit some people from participating. (Paterson, 2002).

Social and leisure activities such as reading, relaxing and watching television occupies a considerable amount of time although, with emotional support from family and friends, the person with an intellectual disability may be encouraged to participate in a ‘dance’ or ‘swimming class’.

Marginalised groups often feel stigmatised discriminated against and excluded from society. (Goffman,1997). This is certainly the case for people infected with human immunodeficiency virus (HIV). They have to cope with loss of employment, rejection by members in their social network often feeling isolated, impoverished and frequently requiring hospitalisation. The Aids Council offers individual programmes as well as a network of social groups for leisure activities. A caseworker explained that it is extremely difficult for the HIV/AIDS affected person to participate in ‘mainstream’ activities because of negative attitudes and stigmatisation.

Discrimination may prevent health services being used by a person living with HIV/AIDS, or their employment may be terminated on the grounds of HIV/AIDS. Communities and community leader should advocate for inclusiveness and equality irrespective of HIV/AIDS status.

Important adverse affects of being unemployed are boredom, lack of finance, victimisation and feelings of entrapment (Farnworth, 1998). Indeed, unemployment also causes social exclusion, which often leads to despair and alienation. The increased stigma, idleness as well as lack of finance can inhibit leisure choices and also their ability to update their skills and return to the labour market.

Mentally ill people in custody are amongst the most stigmatised, marginalized, alienated, and vulnerable groups in our society (Connor, 1996). Negative community responses often leave the person with despair and anguish lowering their effect on self-esteem (Edington et al, 1998). When leaving imprisonment prisoners often feel isolated from their communities. It is difficult to achieve social inclusion and to develop skills adequately enough for employment, to relieve poverty. Alienation greatly affects their leisure choices.

Poverty is found disproportionately amongst minority and ethnic groups. Issues such as discrimination in finding employment, accessing education and training prevents individuals from achieving success. A study investigated sports participation and attitudes towards girls attending high school. It was found that participation from girls from non-English speaking backgrounds was significantly lower than those of Anglo-Australian culture. Barriers included language, cultural and religious requests (Vescio et al, 1999).

Some groups marginalised within society. (2016, Jul 14). Retrieved from https://studymoose.com/some-groups-marginalised-within-society-essay 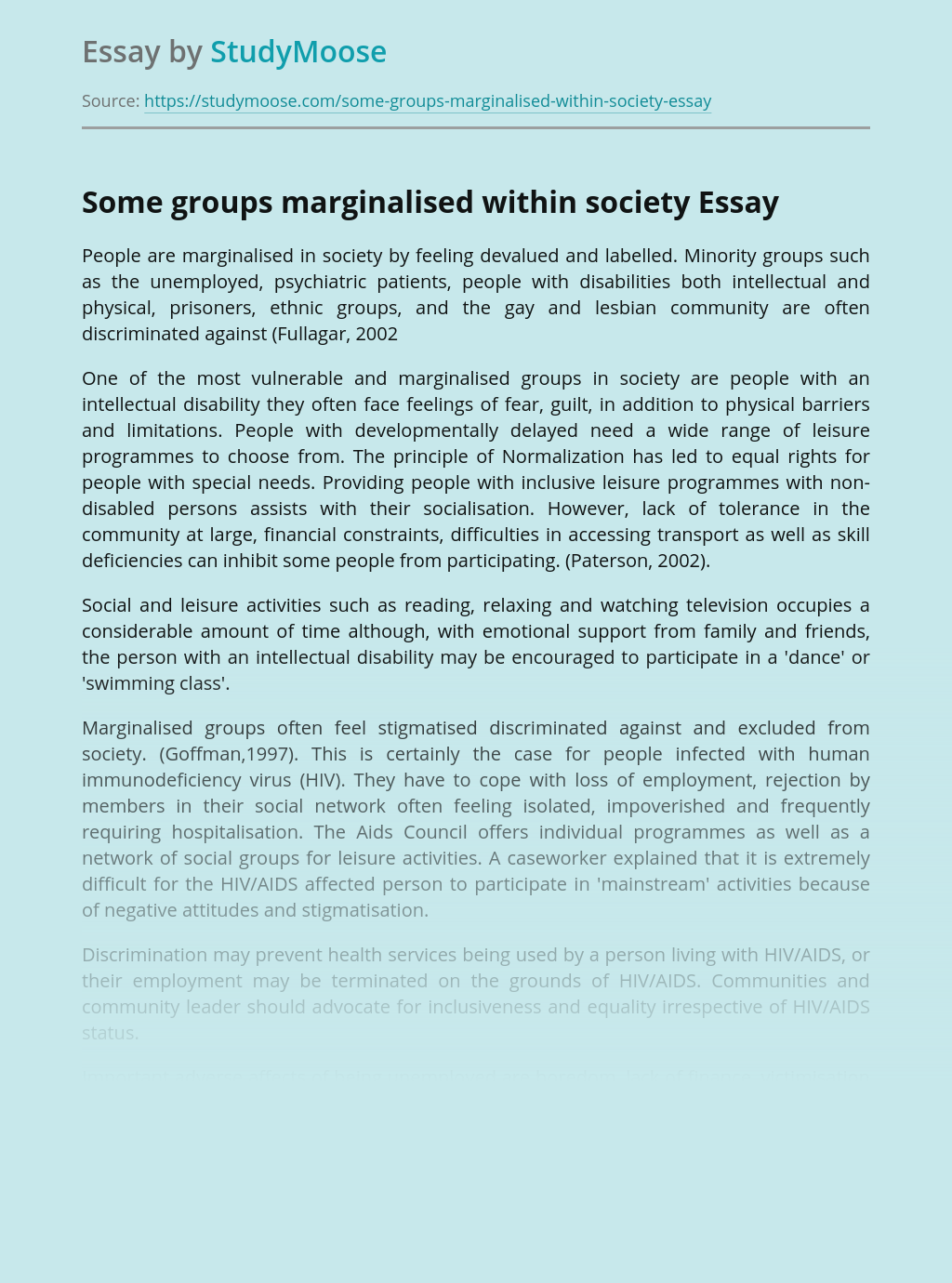 Interviewing a Person with Disability

People, even those with disabilities, should at all times be treated as ordinary people who also need the same things that ordinary and normal people have. Having disabilities does not mean that they have to be treated condescendingly or patronized. In most cases, handicapped individuals have lived almost their entire lives with disabilities. Most of...

Equality, Diversity and Rights within Health and Social Care

Sex discrimination act 1975 This act requests both males and females. Don't use plagiarized sources. Get Your Custom Essay on Some groups marginalised within society Just from $13,9/Page Get custom paper It promotes that both males and females ought to be treated similarly. For instance, in transport, education, jobs etc. It promotes anti-discriminatory practice by...

Get Essay
Caring for Individuals with Additional Needs

A short introduction to the initial pack consisting of objectives and objectives Include a definition of extra needs Discuss why it is essential for care specialists to be knowledgeable about the different extra needs that individuals might have (150 words) P1– Overview reasons why individuals may experience additional needs – Produce a newsletter What are...

Equality, diversity and inclusion in work with children and young people

1. Understand the importance of promoting equality and diversity in work with children and young people. 1.1.Identify the current legislation and codes of practice relevant to the promotion of equality and valuing of diversity Each school must have set polices which is formed of guidance and procedures these don’t just mean that there for our...