Introduction
As we all know there are types of groups that are playing important role in the administration in the mechanism of government especially in terms of decision making or legislative body. These groups are known as Interest Groups and Pressure Groups. Basically interest group is defined as any collection of people organized to promote a goal they share or to resist some objective of the government of other groups. It is also defined as an organized group that tries to influence the government decisions without putting their members in governmental position.

Don't use plagiarized sources. Get your custom essay on
“ Interest Groups and Pressure Groups ”
Get custom paper
NEW! smart matching with writer

In Malaysia, there are various types of interest groups in order to obtain the rights for what they represent. Interest groups in Malaysia such National Union for Teaching Profession (NUTP), The Congress of Unions of Employees in the Public and Civil Services (CUEPACS), Federation of Malaysian Consumers Associations (FOMCA) aggregates and articulate information regarding to their respective interest in order to influence the government decision based on their interests.

However, there are disadvantages for the existence of interest groups. This will be the main
idea of this assignment.

Simplified Functions of Interests Groups
1. Mechanism for Political Representation- The interests of the people are represented in an organized way. It means that the people doesn’t have to directly go to the government but instead have interest groups to represent for them as the groups are established.

The Demerits or The Disadvantages of Interest Groups
* There are various demerits of interests group if it is not well managed and observed. 1. Some of the methods used to gain influence can lead to negative effects -Methods like Bargaining can lead to bad effects because it is similar to lobbying whereby the public policy is influenced directly. It also invloves secret negotiations which is usually related to the national budget. When this happens and if not observed carefully, the allocation of the money can be wrongfully distributed. If it happens, the interest groups may misuse the allocation given and the people they represented MAY NOT be included or the money won’t be used for the better of the people they represent. -Another risky method is the method Propaganda. In propaganda the usage of mass media and other methods to spread information to the public is on a massive scale. If the information or awareness spread by the interest group is false or with hidden agenda, it may cause the people to be wrongly influenced or missunderstanding of the government policy. The people may retaliate for no legitimate reason which may cause damage to a peaceful nation. -Other than that, other methods like direct method like boycotts, demonstrations and strikes may cause commotion. This types of influencing methods are prone to be violent regardless of which party initiate violence first. -Indirect methods like being a member of parliament which is also a member of interest group may misuse his/her power in order to influence the governmernt decision. The member of interest group is a spouse to a bureaucrat may also lead to the misuse of power in order to influence the government decision. For example if a bureaucrat has a wife who is in an interest group, the potential of the husband to listen to every request to his wife relating to her interest group is very high. Not only that, it can be a bad thing too if a retired bureaucrats who join NGO or other groups that have connection with junior bureaucrats whereby the juniors may listen to every request of their seniors. The juniors may provide confidential information of government policies to the retired bureaucrats. -Methods like illegalities may also be used especially in desperate times. Illegalities ranges from extortions, bribery, arson, blackmail and many more.

2. The existence of certain types of interest groups can produce adverse effects. -The existence of an interest groups like Anomic Groups which derived from the word Anomie meaning separation from social norms. This
group is not a formal group. Usually it comes from dissatisfaction of the people. When this happens, it usually involves violence. This type of group may produce protests, racial riots and so on in order for their interest to be prioritized.

4. One Track-Mind (Runs Undemocratically)
-The interests groups usually do not care about others interest and opininons. They also refuse to listen or to take care of other interest. They consider other interests or opinions are wrong. They do not let what others have to say or wants if it is contradict to their core interests.

5. Pluralism (as in United States)
-Critics of pluralism contend that there is no such thing as the common good because there are so many conflicting interests in society: What is good for one person is often bad for others. They argue that the interest groups interfere with democracy because they seek benefits for a minority of people rather than the greater good of the majority. The National Rifle Association, for example, has repeatedly blocked new gun control legislation despite the fact that a majority of Americans actually want stricter gun laws. Other critics argue that the interest group system is really effective only to economic interest groups, which have greater financial resources at their disposal. Nearly two-thirds of lobbyists in Washington represent economic groups. Critics also argue that interest groups tend to ignore the interests of the poor in favor of middle- and upper-class Americans, who have more time and money to contribute

7. Influenced by wealth
-This can be explained by the more money or fund the interest groups has, the more tendency of their interests being prioritized is higher.

Resources
1. 90% of this content is studied, aggregate and filtered from the notes made by Sir Fairuz Hidayat PAD170 Chapter 6 notes. 2. Another 10% is scouted, filtered, studied from the internet. 3. http://www.sparknotes.com/us-government-and-politics/american-government/interest-groups/section5.rhtml 4. http://answers.yahoo.com/question/index?qid=20110412030051AAPzyYE 5. https://www.google.com/#q=disadvantages+of+interest+groups 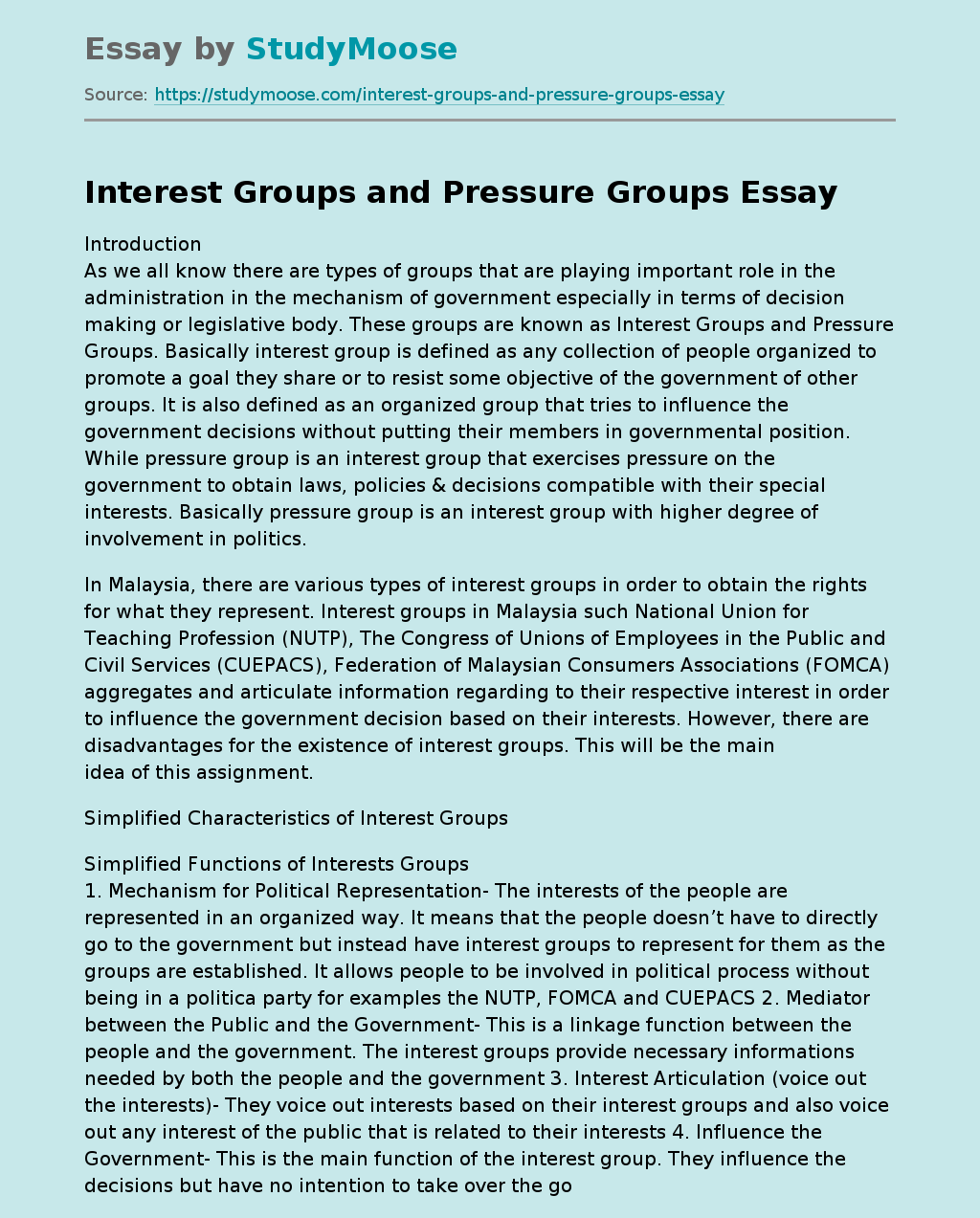