"Helping and Hating the Homeless" A summary of Peter Marin piece

Peter Marin’s piece, “Helping and Hating the Homeless” first appeared in Harper’s Magazine (January 1987). It is an account of why some marginalized people “choose” homelessness and why middle-class culture finds them so threatening.

In this piece, Marin explains to his readers that homeless people were once just like the rest of us. Homeless are considered annoying by most Americans. Marin describes the problem of homeless people and the lack of help for this growing problem. Marin had many strong points in his article on the homeless.

Turn in your highest-quality paper
Get a qualified writer to help you with
“ “Helping and Hating the Homeless” A summary of Peter Marin piece ”
Get high-quality paper
NEW! AI matching with writers

Marin strongly points out that society does not understand the reasons for the homeless problem because most people are ignorant to the problem or are misinformed.

First of all, there are many different reasons as to why the homeless became homeless, but most people categorize all of these reasons into one, the homeless. They think it is one major group of people with the same problem; living on the streets. However, the homeless are made up of veterans, the mentally ill, single parents, physically disabled, runaway children, drug addicts and alcoholics.

The majority of this list were normal people before becoming homeless. Some were members of the working class who ran into problems and ended up on the streets they had no were else to turn. The homeless problem is more complex than most people can imagine. “The word “homeless” tells us almost nothing” (¶ 8).

People who do not agree with the American life style sometimes end up homeless because they want to be excluded from society.

Some people do surprisingly choose to be homeless. Others choose to be homeless because they can not live within a “normal” society. For example, veterans might have to turn to the streets because they couldn’t escape the trauma and couldn’t live a normal life with all of the troubles they endure day to day. There are some homeless people “…who no longer want help, who no longer recognize the need for help, and whose experiences in our world has made them want to be left alone” (¶ 21). Some of these people are content with living on the streets. They do not want a change and seem to be happy in what seems to be a very unfortunate situation. Many people are misinformed about this kind of circumstance.

Some homeless people start out with a normal life then start living on the streets because of a traumatic experience they can not escape. The story about Alice shows this vividly. She had a job as a teacher and one day she was raped. This led to a nervous breakdown and three months in a mental institution. After returning she had no job and no belongings in her apartment. “We must learn to accept that there may indeed be people, and not only vets, who have seen so much of our world, or seen it so clearly, that to live in it becomes impossible” (¶ 17).

She eventually felt she had no where to turn except the streets. Alice was a person similar to many others in society before she was raped. This story shows how the tables can turn in life suddenly and drastically. Most people would never realize that some of the homeless people they walk by day to day is a person like Alice. Society tends to think that the homeless are without homes mostly because of themselves and not because of traumatic experiences.

In the end Marin points out that as a society, we owe it to the homeless to give them a place in the world that they, too, have contributed to. Just because twists of fate or bad luck have put them where they are now, does not give us the right to deprive them of the right to live a decent life just because we fear them, think that we are better than them, or simply believe that they are not our problem.” It may not be a moral Obligation,…, but an obligation non of the less.”(¶ 47).

"Helping and Hating the Homeless" A summary of Peter Marin piece. (2016, Jul 02). Retrieved from http://studymoose.com/helping-and-hating-the-homeless-a-summary-of-peter-marin-piece-essay 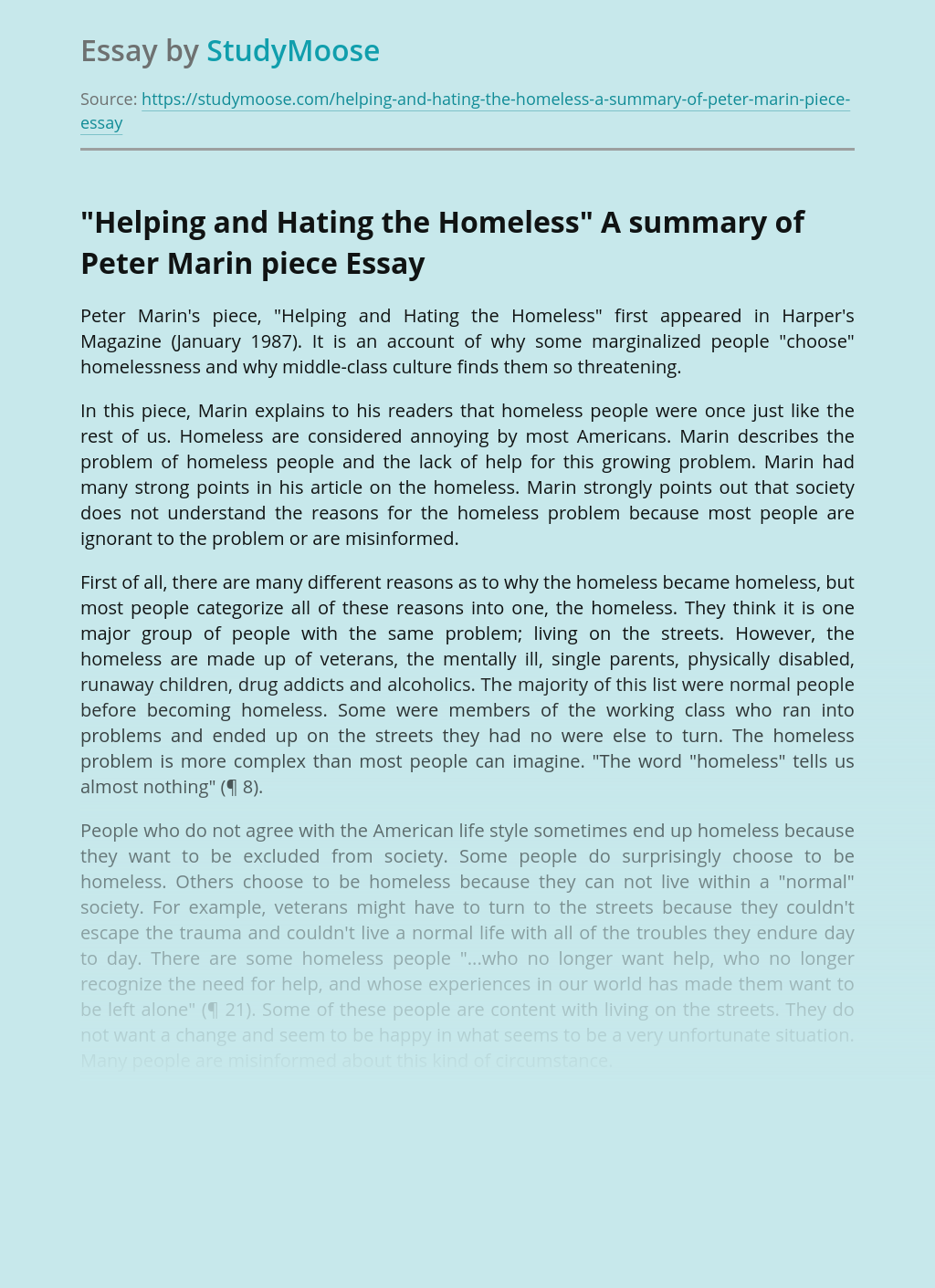 Turn in your highest-quality paper
Get a qualified writer to help you with
“ “Helping and Hating the Homeless” A summary of Peter Marin piece ”
Get high-quality paper
Helping students since 2015
Stay Safe, Stay Original