In society today, discrimination presents itself as a major issue around the world whether in favour or against the lack of individuality leading up to religious intolerance. In the book, The Chrysalids, written by John Wyndham the story reveals a world unhinge by genetic mutations. The Waknuk district is a community that isolates themselves from anything they believe is a deviant or does not follow the description of the ‘true image’ of God – also referred to as the Fringes people.

The Waknuk community shows resentment towards the Fringes people because they dread the mutants which they consider as ‘blasphemies’ since the community believes they are sent by the devil to tempt them away from Purity.

Don't use plagiarized sources. Get your custom essay on
“ The Chrysalids ”
Get custom paper
NEW! smart matching with writer

Their community is very restrictive and does not tolerate any change. Their obsessive compulsive need to cleanse and purify all deviations reflects on the Waknuk community because of their religious values, which results in more bias ways.

The process of development is evolution, which results in prejudice, conformity, and fear Fear is one of the main aspects in this book, such as fear of the future or the unknown.

‘You understand what that means, David? They are scared of us. Ready to break us down in attempt to find out more about us – once they can catch us. You mustn’t let them get hold of Rosalind or Petra – far better to kill them yourself than let that happen to them. You understand? ’” (Wyndham, 143) In this commentary, Michael states that David is to be responsible for both Rosalind and Petra and he must make it his number priority to make sure they are not caught by the Waknuk community.

Michael explains that if they ever get caught, it is much better to kill them than letting the Waknuk community torture them.

They are frightened about what will happen to them in the future, if they will survive or not. Fear of exposure was also another main aspect in this novel. “‘The Group’ in The Chrysalids fear they will be exposed being different among their community in which despised people who were deviated. “People in our district had a very sharp eye for the odd, or the unusual, so that even my left-handedness caused slight disapproval. So, at that time, and for some years afterwards, I did not mention it to anyone — indeed, I almost forgot about it, for as I grew older the dream came less frequently, and then very rarely. (Wyndham, 5)

David’s reflection about his community shows how being afraid and fearing others, such as how the Waknuk community fears their leader Joseph Strorm, gives Joseph Strorm more power and causes him to become more paranoid of his religious teachings. Fear can bring out the worst of anyone and it can cause conflicts such as the problems in Waknuk from the smallest toe judging to committing suicide. Besides fear there is also conformity, which means an agreement between one person’s behavior and expectations towards a group which creates lack of tolerance and individually.

Everyone in the Waknuk community, who are considered ‘norm’, must follow the true image of God. “’You blasphemed, boy. You found fault with the Norm. Everybody here heard you. What have you to say to that? You know what the Norm is? ‘ I gave up protesting. I knew well enough that my father in his present mood would not try to understand. I muttered, parrot-like: ‘”The Norm is the Image of God”. ‘ ‘You do know — and yet, knowing this, you deliberately wished yourself a Mutant. That is a terrible thing, an outrageous thing. You, my son, committing blasphemy, and before his parents! ” (Wyndham, 27) In this argument between Joseph Strorm and his son, David begins to question his beliefs therefore causing his father’s temper to rise. Another outlook on conformity is lack of tolerance, which results in favouritism. “What can it have been – this terrible thing that must have happened? And why? I can almost understand that God, made angry, might destroy all living things, or the world itself, but I don’t understand this instability, this mess of deviations – it makes no sense. ” (Wyndham, 78) David’s reflection is about how the mess of deviations can upset or anger God in the Waknuk community.

After meeting his friend, Sophie Wender – who has six toes, David wonders how God can hate someone with such a small blemish. He cannot wrap his mind around how the devil can send Sophie to weaken and tempt them away from Purity. Conformity puts pressure on the leader and gives them power over everything, like Joseph Strorm who is presented with so much power that he is overwhelmed. He gets lost in his own beliefs, taking the bible too literal and uses God as an excuse to treat people differently, far worse than the ‘norm’ in this case.

In addition to fear and conformity, another element to consider is prejudice. Prejudice is very important in this book because it shows how differences in beliefs can cause a lot of conflict throughout the story. This book is mostly based on physical features, resulting in prejudice and discrimination. “And any creature that shall seem to be human, but is not formed thus is not human. It is neither man nor woman. It is a blasphemy against the true Image of God, and hateful in the sight of God. ‘ I was abruptly perturbed — and considerably puzzled, too.

A blasphemy was, as had been impressed upon me often enough, a frightful thing. ” (Wyndham, 13)David’s reflection about how Sophie having an extra toe can make God to hate her causes himself to begin to doubt his own strict teachings. For deviations such as Sophie who has an extra toe, must know that if one does not establish the image of the ‘norm’ they face consequences or punishments. Lack of acceptance is another side to prejudice in the Waknuk community, since they send people who are different and do not result in the image of God to The Fringes. He stared at me. ‘Man alive, you’d not want to go to the Fringes.

Why, they’ve got nothing there — not even enough food. Most of them are half starving, that’s why they make the raids. No, you’d spend all the time there just trying to keep alive, and lucky if you did. ‘” (Wyndham, 56) Uncle Axel’s commentary about David running away shows how differently the Waknuk and The Fringes people are treated. The Waknuk community believes they are the true image of God, which gives them the idea that they are in more favour by God than the Fringes people.

In conclusion, the idea of evolution resulting in prejudice, conformity, and fear, separate the two groups and their different beliefs. It is stated by the Sealand woman that the people of Waknuk are a less superior community they are devoting the majority of their time and energy to removing deviants. They remove evolution from the Waknuk community and prevent them from evolving and therefore becoming a stronger and more civilized place. From removing boundaries and letting change into their lives they will live in a place of freedom and no fear of being different, eliminating prejudice.

In the meantime, the Waknuk community will not survive in their isolated world, causing them to live in a deep, depressive life. Throughout the book, we learn that the Fringes people may not have the upper hand, living in a dangerous area, but they still manage to find happiness in their life. The key aspect is that power can seem very important, but it is self-control that is most powerful. Learning to control and know what is right and wrong is the true aspect of life. Life is how we live, and to live, we must control our life.

The Chrysalids. (2016, Sep 14). Retrieved from https://studymoose.com/the-chrysalids-2-essay 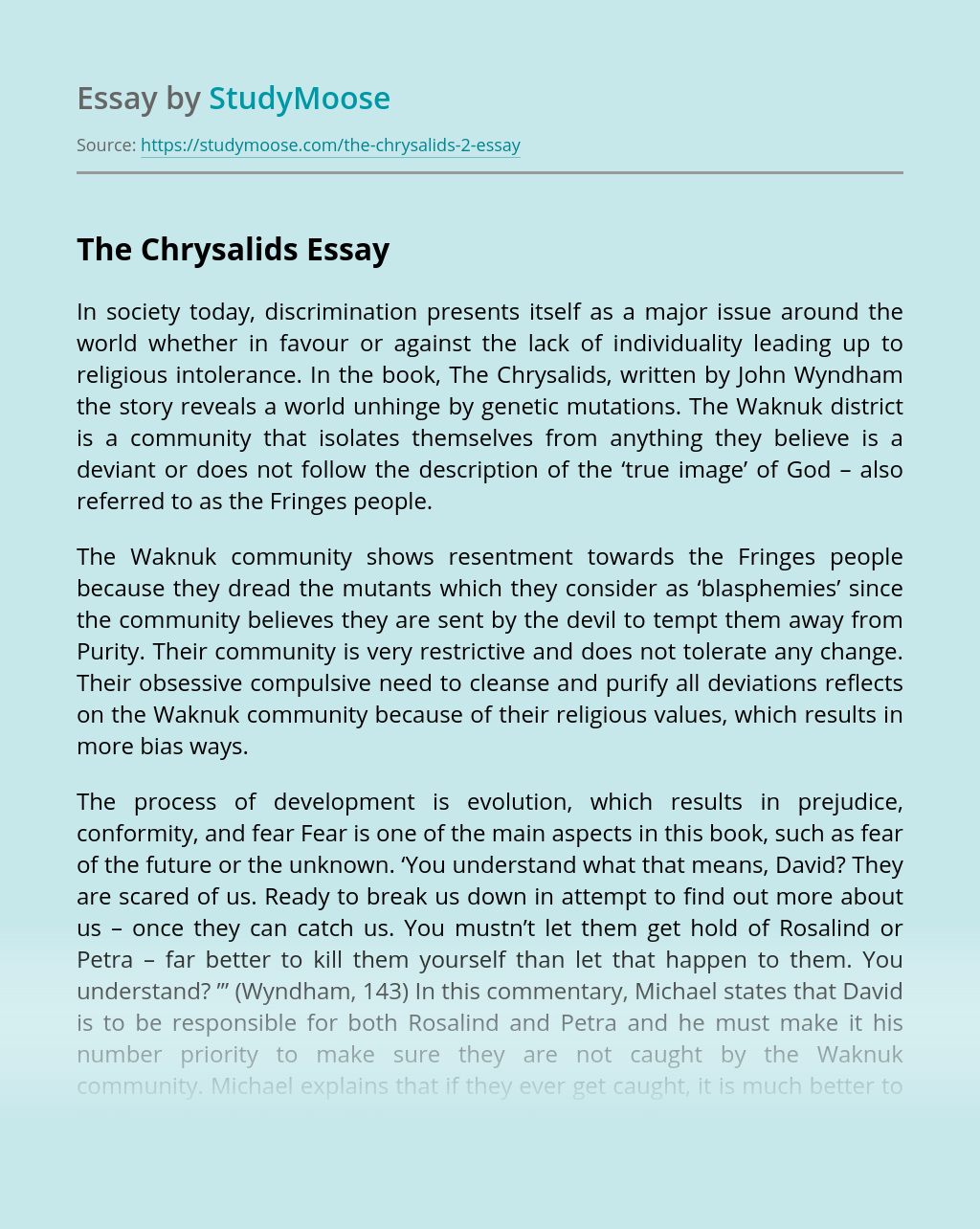