Don't use plagiarized sources. Get your custom essay on
“ Comparing and Contrasting the Colonial Regions Established in British North America ”
Get custom paper
NEW! smart matching with writer

Daily life was very different for the people who lived in each of these regions in the way they lived, worked, worshipped, and did business. This paper will look compare and contrast the three distinct colonial regions which came together to form the United States of America. Let’s begin by looking at the origins of British colonization in North America. By the sixteenth century, Spain and Portugal had established colonies in South America and as far north as Florida.

France, on the other hand had established colonies in what is now Canada.

The coastline from Acadia to Florida however, was considered by the Spaniards too be cold for cash crops such as coffee and sugar, while the French deemed it to be too warm for the fur trade. This left the mid-Atlantic seaboard open for colonization by the British. (Taylor) Unlike the French and the Spanish, the British monarchy could not afford to finance colonies overseas. Instead, the English government subcontracted the colonization of North America to private firms and individuals looking for risky, but potentially lucrative, investments.

As a result, all three colonial regions had one thing in common, they were all initially private enterprises undertaken, at least in theory, as investment opportunities. In this proprietary system of government, the owners of the charter appointed a governor and a council consisting of men who were landowners who made the day to day governmental decisions that affected the colonies. (Taylor) Virginia, in the southern region, was the first area colonized, named for Queen Elizabeth who was supposedly a virgin.

It was intended to be a source of wealth for England by providing cash crops such as tobacco and, eventually, a new market for English goods.. The short winters and warm summers were ideal for growing cash crops such as cotton, tobacco, and rice, all of which were labor intensive. Most of the people who immigrated to these southern colonies were poor Englishmen who were part of the growing number of unemployed in their home country. They paid for their passage by becoming indentured servants, hoping to work off their servitude on the plantations and begin a new life in a new land.

Most of these colonists were middle class families who were able to afford to pay for their passage themselves as opposed to becoming indentured servants. These northern colonies with their cold winters and short summers offered no cash crop to export back to Europe, so these families mostly established farms that produced food to feed themselves. These farmers had to cut clearings in the forest and build houses, barns, and fences by hand in order to grow enough food and keep enough livestock to provide for their families. There was very little need or slave labor to work these family farms and only the very rich owned slaves who did mostly domestic duties. (Taylor) The governmental institutions and the method by which land was distributed differed greatly between the New England and the southern colonies. In the New England colonies land was granted to families who joined together to form towns. In the southern colonies, land was allocated directly to individuals in large tracts, mostly to the wealthy and well-connected. This accounts for the large plantations that developed in the southern colonies.

In fact, there were very few towns in the southern colonies and most government was conducted on the county level. One of the reasons for the many different ways in which the New England and the Chesapeake Colonies developed was the geographical separation of the two areas. New England, to the north, and Chesapeake to the south was separated by a middle region that was not originally colonized by the British. This middle region where the Hudson River met the Atalntic Ocean was originally colonized by the Dutch.

They had established trading posts to facilitate the fur trade with the Amerinds which later become the colony of New Netherland. This region between the northern and southern colonies was eventually conquered by the English in order to unite the two. New Netherland was renamed New York and other colonies were established including Pennsylvania, New Jersey, and Delaware. (Taylor) These “middle region” was inhabited by Dutch immigrants as well as many other different ethnic people groups.

It was, in many ways, the fore runner of the great “melting pot” that would become the United States. The climate was warmer than New England but not as warm and muggy as the Chesapeake colonies, and the soil was idea for growing wheat and other grains. These grains became the cash crops for these colonies and this area soon became known as the “bread basket” of North America. The residents of the area practiced many different religions including Quakerism, Catholicism, and Puritanism. One thing that inhabitants of all three of these colonial regions had in ommon is that is that their lives were centered on their own families and kinship and their respective churches. They also had a strong sense of community and the needs of the community took precedence over the needs of the individual. (THE CULTURES OF COLONIAL NORTH AMERICA, 1700—1780) This feeling of community served to unite these 13 different colonies in disparate regions along the eastern seaboard to for “a more perfect union”. These colonies eventually formed a nation that would become the greatest nation on earth. 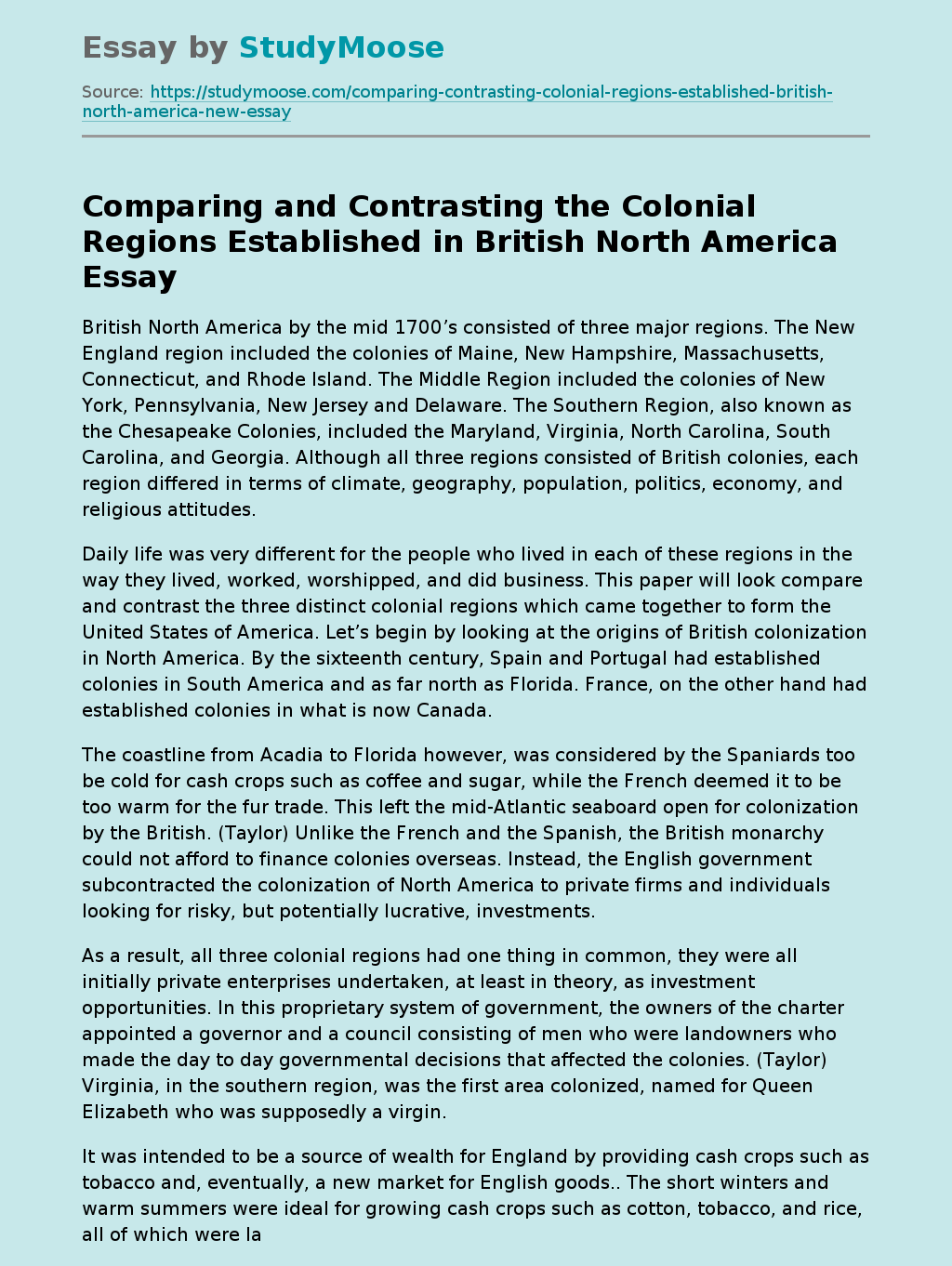