Throughout history the Aboriginal peoples of North America and

Throughout history, the Aboriginal peoples of North America and the Europeans have had continuing arguments and disputes over land. To this day, there are still land issues that are trying to be resolved. Twenty-nine years ago, one of the most violent and intense land disputes occurred in Canada. It was unfair, unjust and unethical. This event was referred to as the Oka Crisis. It was a seventy-eight day stand off between Mohawk protestors, Quebec provincial police and Canadian armed forces. Since the eighteenth century, the Mohawks had been pressing the government to recognize their land in the area but had been ignored.

Don't use plagiarized sources. Get your custom essay on
“ Throughout history the Aboriginal peoples of North America and ”
Get custom paper
NEW! smart matching with writer

In 1961, a nine-hole golf course was built on the land that the Mohawk claimed as the Kanesatake reserve. It was known as their Commons; the Pines. This land included a burial ground and dense forests that marked the final resting places of Mohawk ancestors for generations. A member of the Kanesatake community stated, “The whole village was built on Indian land.

They used and enjoyed our forest land, too. We welcomed them. Then they wanted to add an extra nine holes to their private golf course by cutting down the sacred pine forest we planted, and where our Ancient burial grounds are located. This was too much to swallow and we refused to let our dead be disturbed or to let them use the hand for that selfish purpose” (The Oka Crisis Moments That Matter: Canadian History Since 1867 (2019)). In 1986, the Mohawks filed for a land claim, but had been rejected by the town of Oka.

Even though this land was traditionally Mohawk territory, the town of Oka refused to acknowledge that and assumed it was theirs for the taking. In 1989, it was announced by the mayor of Oka that the golf course would be expanded. As well, authorization was given to construct sixty luxury condominiums in the Pines. These announcements were the immediate cause of the Oka Crisis. By examining the blockade/police raid, the federal involvement/Oka crisis ending and the resolution/significance and researching the effects that came along with it, it is clear that the Mohawk community no longer wanted to be ignored. They decided to take a stand.

In protest of being ignored, the Kanesatake community constructed a barricade blocking access to the Pines area. Two other reserves, Kahnawake and Akwesasne, joined the protest. After two injunctions to remove the road block were ignored, the mayor of Oka asked the Quebec provincial police force, Surete du Quebec, to step in and intervene. On the morning of July 11, 1990, the Quebec provincial police force attacked the barricade using tear gas and concussion grenades to create panic and confusion. This resistance continued for days. The Kanesatake protestors created more blockades by pushing abandoned police cars into place. These cars were not only blocking the golf course but were now blocking Montreal’s main highway. As well, Mohawks from the Kahnawake reserve blocked the Mercier Bridge in helping to support. This resulted in the access to be cut off between the Island of Montreal and the South Shore suburbs. In response, the Quebec provincial police constructed their own blockades on roads that led to the Oka and Kanesatake reserves This angered the local residents. The relationship between the Indigenous and non – Indigenous got worse. The Quebec provincial police force had to deal with not only the blockades built by the Mohawks and their alliances, but frustrated citizens who blamed the Mohawks for the land dispute situation. The Minister of Aboriginal Affairs for the government of Quebec, at the time, tried to communicate with the Mohawk people to try and negotiate a deal. Before the Oka Crisis, the Minister wrote a letter to the Oka mayor. He stated that taking away the Mohawk’s land to construct a golf course was unjust and unfair. He suggested that the mayor postpone the construction. The mayor ignored this suggestion. On August 12 1990, Judge Alan Gold brought everyone together to come to a final agreement. Nothing was resolved at this gathering.

It became clear that the Quebec provincial police force was not able to resolve the land dispute crisis. Therefore, the Canadian Army was brought in. The Mohawks were given an ultimatum. They were to either open the Mercier Bridge in less than three days or the army was to move in. The Mohawks refused to budge. Because of this, tension and frustration rose dramatically. Several attacks started by angry civilians against the Mohawks on Mercier Bridge. The army stood their ground to help reinforce this brawl. On August 29 an agreement was reached and the blockade was taken down. However, the Kanehsatake protestors continued to protest at the Oka barricade. The protestors created a curtain to hide themselves so the army would not be able to watch over them. The army responded by hosing them with high pressured water. On September 26, after seventy-eight days, the people of Kanesatake surrendered. They finally had enough. After surrendering, the army left as they had no reason to be there.

After the crisis had ended, the government purchased plots of land for the Kanesatake’s. “In 2001, the Kanesatake Interim Land Base Governance Act confirmed that the land was to be reserved for the Kanesatake Mohawk. However, it did not establish the land as a reserve, and there has been no organized transfer of the land” (Oka Crisis The Canadian Encyclopedia 2019). The Oka Crisis played a significant role in establishment of the Royal Commission on Aboriginal peoples. The crisis made Canadians more aware of Indigenous rights and land claims. “The Crisis marked a turning point in public awareness of First Nations, who went from being “vanishing people” to a political force to be reckoned with” (The Oka Crisis Moments That Matter: Canadian History Since 1867 (2019)). The Oka Crisis motivated Indigenous peoples across Canada to step in and intervene in other movements such as the Idle No More movement and the missing and murdered aboriginal women in British Columbia. However, not all issues of land claims and the treatment of Indigenous people were resolved after the Oka Crisis. Since the crisis, there has been an increase in legislation that protects First Nations resources and land. Although many positives have come from the Oka crisis, there was still a large amount of trauma in the community. It has taken a generation for them to recover from the traumatic events. The community is still in the process of healing.

By examining the blockade/police raid, the federal involvement/Oka crisis ending and the resolution/significance and researching the effects that came along with it, it is clear that the Mohawk community no longer wanted to be ignored. They decided to take a stand. The 1990 Oka Crisis embodied the difficult times the Indigenous and non – Indigenous individuals and/or populations have faced throughout many years over land disputes. Europeans took control over lands that were first claimed by the Indigenous population. Indigenous people felt powerless. They were stripped of their grounds because of greed and power. Canada failed to treat the Indigenous population with respect and dignity. Overall, the crisis was about Indigenous people wanting protection, respect and honour for them and their land. It is important to discuss Indigenous history because no body talks about it (Powless, A., 2010, Lecture 17, INDG 1F90, Brock University). There are still many land claims that have yet to be settled. The Oka Crisis illustrated that the seventy-eight-day conflict was an important moment that mattered in Canadian history and definitely raised awareness across the country concerning land disagreements between the Indigenous people and the government.

Throughout history the Aboriginal peoples of North America and. (2019, Dec 04). Retrieved from https://studymoose.com/throughout-history-the-aboriginal-peoples-of-north-america-and-example-essay 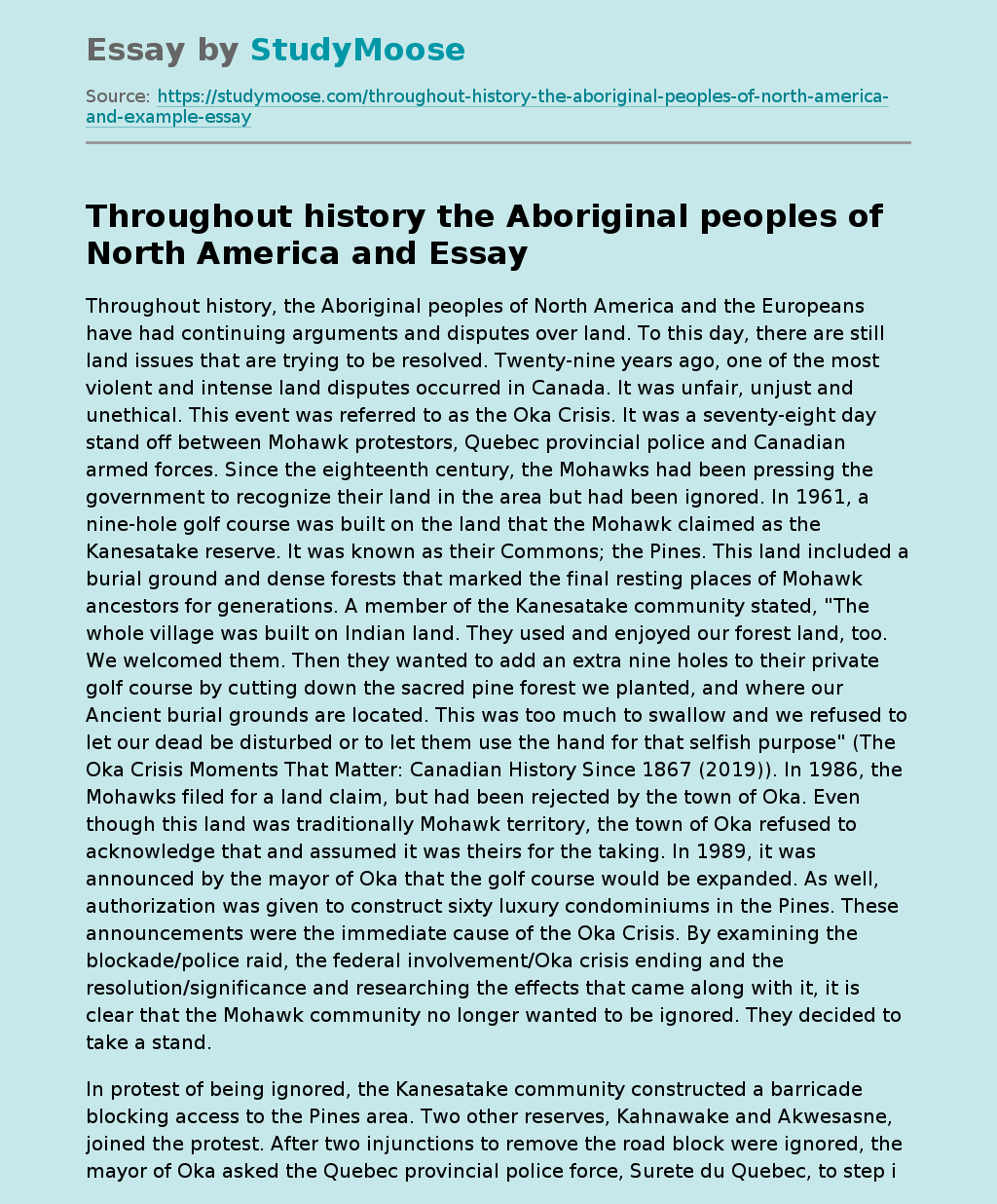