The Enlightenment and the Great Awakening movements

What are the fundamental differences between the Enlightenment and the Great Awakening movements, and what if anything did these two movements have in common?

The Great Awakening and the Enlightenment were two historical events that shaped the thoughts of people and religion in the mid 1700’s America. The Great Awakening began about the 1930’s and reached its climax ten years later in 1740. They both formed and shaped the way many think today and brought lots of notions on human rights.

Beginning in the 1740’s, the enlightenment was a reforming of religion.

Don't use plagiarized sources. Get your custom essay on
“ The Enlightenment and the Great Awakening movements ”
Get custom paper
NEW! smart matching with writer

People started thinking differently about their religion. Prior to the enlightenment it was believed that everything that happened was because god wanted it to happen. However, after a series of events in Europe it started to become known that perhaps god didn’t control our lives directly. This led to John Locke essay concerning human understanding which led many to embrace reasonable or rational religion.

Two Treatises on Government in which he goes against the belief in divine right.

The whole idea behind divine right was that monarchs were direct descendants of god, and because of that they had a right to be the leader of the country. However, the enlightenment saw the emergence of the deists who believed that god, having created perfect universe, did not miraculously intervene in its workings, and did not have a direct influence on human life but rather left it alone to operate according to natural law. If god did not control our lives directly then these monarchs were no better then the rest of the population.

These ideas eventually had a profound effect on the Colonies. This new belief that the King and Queen of England were no better then the rest of the Colonists is what allowed them to have the courage to rise up against the England.

Another Religious movement that came to British Colonies around the same time as the enlightenment was the great awakening. However, the great awakening was the exact opposite of the enlightenment; it was a movement to increase the role of religion in the lives of the colonists. Great Awakening cut across lines of class, status, and education. Religion was primarily a matter of emotional commitment.

The Great Awakening’s long term effects exceeded its immediate impact. The great awakening movement encouraged ordinary people to learn the bible and the teachings of the bible. This in turn destroyed the power of the ministers because people no longer needed them to learn the lessons the bible has to offer.

The ministers could no longer mix their political messages in with their sermons because people could read and understand the bible themselves. Because of this loss off power the colonists started thinking for themselves which eventually led to the revolution.

The revivals started the decline in the influence of Quakers who were not affected by the Great Awakening, Anglicans, and Congregationalists.

The Great Awakening stimulated the founding of a number of academies and colleges, Princeton, Columbia, Brown, Rutgers, and Dartmouth.

The Great Awakening also gave added prominence to women in colonial religion. For several decades ministers had singled out women as embodying the Christian idea of piety.

Even though the Great Awakening movement did not produce distinct political ideology so much, by empowering ordinary people to criticize those in authority, the revivals laid some of the groundwork for political revolutionaries a generation later, who would contend that royal government in America had grown corrupt and unworthy of obedience.

In conclusion, these two movements had played a large role in the formation of the United States. The influence of Europe’s enlightenment had spread widely in the colonies, and by 1766 Anglo-America had more institution of higher learning than England. A self confident Anglo-American upper class had garnered expertise in law, trade, finance, and politics. The Great Awakening resulted in an outburst of missionary activity among Native Americans in the movement of importance against slavery; and in various other humanitarian undertakings. It served to build up interests that were intercolonial in character, to increase opposition to the Anglican Church and the royal officials who supported it.

The Enlightenment and the Great Awakening movements. (2016, Jun 21). Retrieved from http://studymoose.com/the-enlightenment-and-the-great-awakening-movements-essay 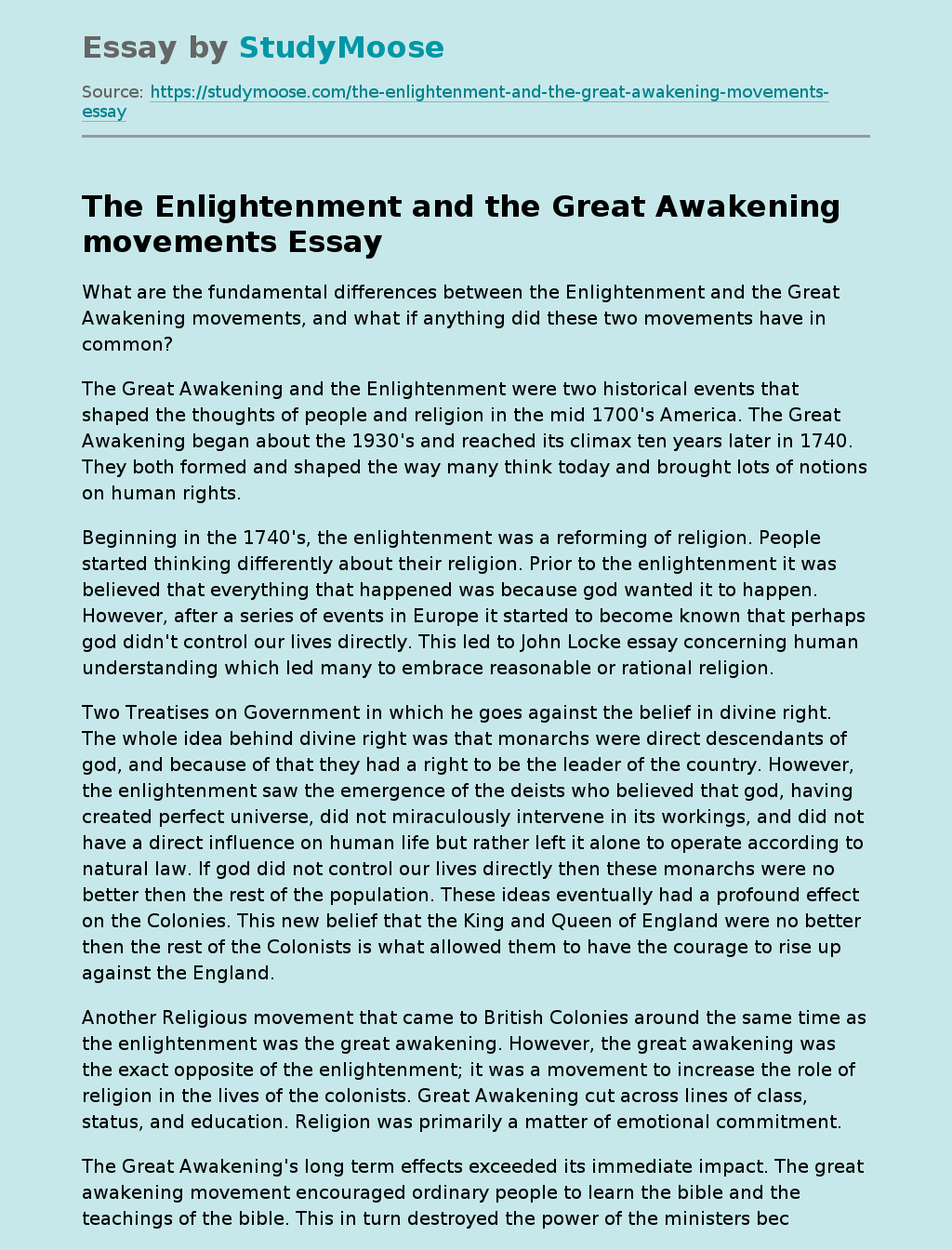