An Analysis of Female Discrimination in The Awakening by Kate Chopin

In the late 1800’s, as well as the early 1900’s, women felt discriminated against by men and by society in general. Men generally held discriminatory and stereotypical views of women. Women had no control over themselves and were perceived to be nothing more than property to men. They were expected to live up to a perfect image that society had created, while trying to comply with their husbands’ desires. While many women felt dissatisfied with their lives, they would not come out and say it.

Don't use plagiarized sources. Get your custom essay on
“ An Analysis of Female Discrimination in The Awakening by Kate Chopin ”
Get custom paper
NEW! smart matching with writer

However, in 1899, Kate Chopin wrote The Awakening, which showed women that they were not alone. This novel showed the discriminatory views and treatment towards women. It also distinctly indicates the dissatisfaction that women felt in their lives. Because of the roles that society has given them, women are not able to seek and fulfill their own psychological and sexual drives. In The Awakening. Chopin uses Edna Pontellier to show that women do not want to be restricted by the roles that society has placed on them.

Because of the time she lived in, Edna felt oppressed just because she was a woman. Being a married woman and a mother made her feel even more tied down. By looking at the relationship between Edna and her husband, Leonce, we see that men treated women as if they were nothing more than possessions or property. They had no respect for their wives, mothers, or even their daughters as they constantly treated them like housemaids who were there to answer to their every call.

Even Edna’s father thinks that his daughter is her husband’s property. We see this when he says “You are far too lenient, too lenient by far, Leonce. Authority, coercion are what is needed. Put your foot down good and hard; the only way to manage a wife” (Chopin 663). This is her own father telling her husband that he needs to be tougher on her. Chopin is clearly showing the inequality of women here. Nowadays, you would never find a father telling his son-in-law to be harder on his daughter. This was something that Edna would not accept. Chopin cleverly adds that it was this same treatment from her father that killed her mother. “The colonel was perhaps unaware he had coerced his own wife into her grave” (Chopin 663).

“She would, through habit, have yielded to his desire; not with any sense of submission or obedience to his compelling wishes, but unthinkingly, as we…go through the daily treadmill of life which has been portioned out to us” (Chopin 631). This best indicates how routine everything had become for women, and how entrapped they must have felt to be stuck in this daily routine. “It is worth noting that Edna does not face any explicit oppression. She is merely expected to run the house, care for the children and do her best to please her husband. Nevertheless, she finds the role unbearable. She cannot give her life, her identity to others. It is better to die” (Aull). However, this almost methodical way of life affected Edna worse than many other women. Others, such as Adele Ratignolle, who is described as the perfect Creole “mother-woman,” accepted their female roles with enthusiasm. She represents the perfect woman according to society, which is what Edna does not want to be.

Even though Edna has two children, she does not want to accept the conventional mother role. Mademoiselle Reisz represents another type of woman and another alternative for Edna. Although she is not married, Mademoiselle Reisz still fits society’s role because she is “under control.” She is a stable woman, who is not seeking “unladylike” excitement and adventure, as is the case with Edna. Rather, she has devoted her life to music, which is a worthy cause. However, Edna, having been awakened to her new-found desires, seeks excitement and independence.

Eventually, especially in the case of Edna Ponteiller in The Awakening, Chopin’s women select (men) on the basis of their own sexual desires rather than for reasons Darwin attributed to civilized women, who are largely influenced by the social position and wealth of the men (Bender 462).

This shows a direct opposition to the common practice of women marrying for social status rather than for love. Edna, in fact, sacrifices her security, a valuable commodity in those days, in order to seek out her own sexual desires. This is another example of Edna refusing the role that society has created.

Of course, men could have never imagined that a woman could ever have sexual desires as men do or even think of the idea of independence by themselves. Men literally thought that women were too ignorant and lacked the intelligence to become independent. But when the men realized that women could be independent and do not need a man to survive, the men felt threatened and tried to dismiss these radical ideas as being just a phase. This is illustrated in a conversation between Leonce and Doctor Mandelet, in which the doctor says:

It would require an inspired psychologist to deal successfully with [her]. In addition, when ordinary fellows like you and me attempt to cope with their idiosyncrasies the result is bungling. Most women are moody and whimsical. This is some passing whim of your wife, due to some cause or causes which you and I needn’t try to fathom. But it will pass happily over, especially if you let her alone (Chopin 659).

The doctor is here dismissing her ideas because she is a woman. What the doctor and Leonce fail to realize is that she wants equal rights. She does not want to be limited by society any more. In the same conversation, Leonce states, “She’s got some sort of notion in her head concerning the eternal rights of women” (Chopin 658). This shows that, deep down, Leonce knows what Edna wants, he’s just too stubborn and confident to realize that it’s even a possibility. He doesn’t understand that women have thoughts and desires too.

Even though Edna’s actions were very selfish in The Awakening, Chopin used her to show other women that they don’t have to live by society’s standards. She encouraged women to discover and explore their own independence and sexuality. Also, Chopin shows the effect that society can have on a woman. While some may be able to handle the pressure, others, such as Edna, cannot. This was evident by her suicide. “Consequently, this ending diminishes Edna’s stature and perforce reduces the significance of her rebellion” (Conn 165). Although her suicide defeated the purpose of her awakening, which was to be free, Edna was still successful in showing that women do not want to be restricted by the roles that society has placed on them.

An Analysis of Female Discrimination in The Awakening by Kate Chopin. (2021, Dec 13). Retrieved from http://studymoose.com/an-analysis-of-female-discrimination-in-the-awakening-by-kate-chopin-essay 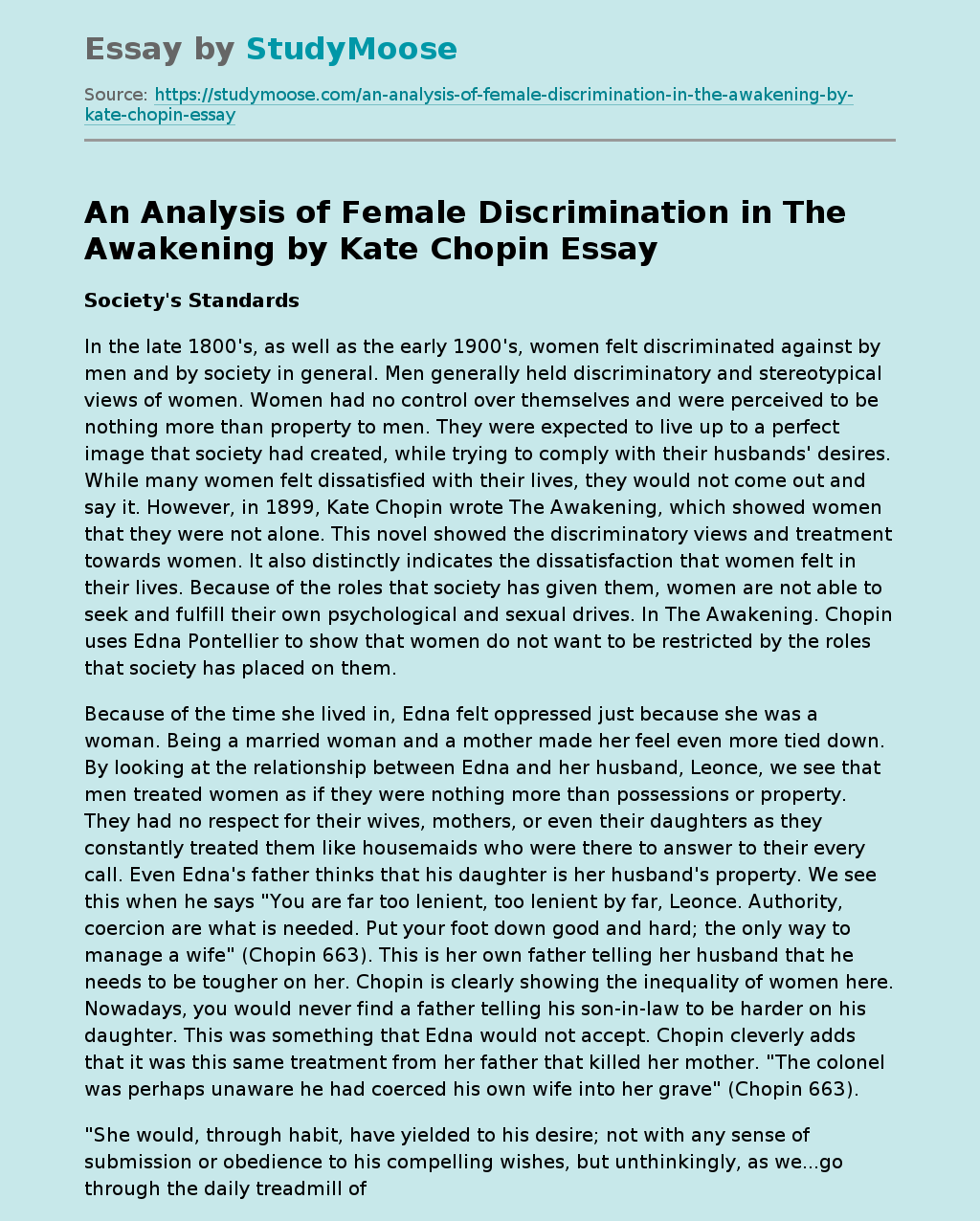