Response Journal for "Boys and Girls" by Alice Munro

Alice Munro’s “Boys and Girls” tries to view a young girl’s rite of passage into womanhood, through a limited feminist perspective. The narrator battles with conformity on a 1940’s Canadian Fox Farm. As this time period was still centred on male dominance, her desire to become a powerful woman wastes away when she finally submits to the rules that society has imposed on her.

The story is written in first person narration and is seen through the eyes of a young and free-spirited girl.

Don't use plagiarized sources. Get your custom essay on
“ Response Journal for “Boys and Girls” by Alice Munro ”
Get custom paper
NEW! smart matching with writer

The themes of this story are self-discovery, stereotypes, and rebellion. To portray these themes, literary devices such as allusion, similes and situational irony were used. Allusion is present in the line “his favourite book in the world was Robinson Crusoe,” as the author attempts to portray the father’s inventive nature by relating it to a well-known novel. Similes can be seen in the narrator’s descriptions of her environment as she states that the “snowdrifts curled around the house like sleeping whales,” to bring to attention the howling of the winds.

Situational irony is evident throughout the story because the narrator despises her mother for being a woman and working in the house, but in the end, she too develops into a woman and takes on the roles of the title.

This story of inequality between the sexes appropriately opens with a detailed account of the narrator’s father. The narrator describes every aspect of her father’s life, including his occupation, and even his friends.

Throughout this first part of the story, the narrator’s mother is virtually inexistent, outside her disapproval of her husband’s pelting business. The reader is left uncertain about the mother’s whereabouts, but is aware that the father figure is somewhat of an idol in the narrator’s mind.

As a young girl, the narrator, holding on to her carefree spirit and strong sense of individualism, is unaware of the constraints of her gender. Although she is the main character, the narrator is not given a name. This seems to enhance her lack of purpose in society, and stresses that the attitude of the narrator is not that of just one woman, but women in general. Munro’s decision to allow the narrator to remain nameless assists in the progress and significance of the character.

The narrator’s brother, however, is given the name of Laird. Synonymous with “lord,” the boy’s name plays an important role in outlining the rules society has forced upon the narrator. This name symbolizes society’s favouritism towards men, and how the male child was superior in the eyes of the parents. The fact that the narrator remained anonymous, whilst her brother was given the name of Lord, signifies the difference between the sexes at the time.

It is quite odd that Munro used the girl to portray the feelings of female stereotyping of this story. Munro captures the attention of her audience through the lines, “It was an odd thing to see my mother down at the barn. She did not often come out of the house unless it was to do something- hang out the wash or dig potatoes in the garden.” These lines are full of sexism and serve only to relay the common roles that women were forced into.

Although aware that the girl would much rather spend time with her father, the family constantly attempts to encourage her to act as a proper girl should. The fact that the narrator idolizes her father, just provides further proof of her strive to gain equality. As the girl grows older, the pressure from her family becomes more intense. The narrator’s grandmother comes off as the perfect example of the how women were thought of at the time.

Having been raised in a time where the rules imposed on women were even stricter, the grandmother best voices what the attitude of a girl should be. The narrator, however, refuses to listen to the advice offered to her, and responds with defiance. The girl still seems to believe that if she does not conform to society’s rules, she can hold on to her freedom and will somehow be able to escape with her individuality.

It is only through the killing of the horse, Flora, that the narrator finally assumes her appropriate gender roles and enters her rite of passage. To help Flora escape her inevitable fate, the narrator leaves the gate open. It seems as though the narrator believed that it was the gate that held Flora back from the freedom she was entitled to. Flora, however, could never escape her fate and was eventually caught and killed. Through Flora’s death, the narrator comes to realize that her acts of disobedience will always be in vain because her fate is unavoidable. The gate symbolizes the girl’s hope of liberation outside of the farm. The war against society could not be won, so she gives up and proceeds to help her mother with dinner. By assuming the roles of a woman, she completes her rite of passage into womanhood.

The killing of Flora also leads to Laird’s rite of passage, though in his case this is the cause of different reasoning. Whereas the narrator learns that she cannot escape her fate, Laird visualizes a new life for himself. He reaches maturity by priding himself in his kill, symbolized by the horse’s blood. He boasts to his mother about the blood on his arm, and feels as though he is finally man enough to stand beside his dad. This is part of the symbolism behind the name “Boys and Girls,” as the contrasting natures of the two children are portrayed.

In order to advance her feminist viewpoint, Munro touches upon only the minor aspects of the female stereotypes. She focuses on the girl’s newfound interest for fashion, beauty and decor to portray her femininity, rather than the harsher traits that were frequently placed on women. The author uses this limited feminism to stress the fact that this protest and change were the actions of a mere child that had not yet seen the full effects of prejudice.

When taking into consideration the time period and setting, it can be clearly understood why the narrator and her brother both conformed to their gender-specific roles. As the world entered into the Second World War, women replaced their husbands in the workforce and started gaining recognition. However, because this story takes place in the rural side of Canada, the war’s social impact does not seem to have yet reached this area. The narrator’s mother being just a simple housewife causes the narrator to have a negative bias towards her, illustrating how women are looked down upon by society. Through her ultimate disapproval of her father’s inhumane occupation, the narrator reveals a side that is driven by emotion. Her concern for the helpless animal’s well-being displays her affectionate and loving character.

Alice Munro’s story of “Boys and Girls” is an enlightening tale of the struggle that each child undergoes in discovering their own identity. The author insists throughout the story that the narrator’s acceptance of her place in society is influenced by her family and setting. Her resistance is useless because she has no choice but to conform into a proper woman. She is forced to hide her yearning for individualism in order to be socially acceptable. Current literature uses the feminist approach to convey the views of oppressed women, but Munro’s use of the limited amount of feminism allows the reader to make up their own opinion on the matter.

Response Journal for "Boys and Girls" by Alice Munro. (2016, Jun 28). Retrieved from https://studymoose.com/response-journal-for-boys-and-girls-by-alice-munro-essay 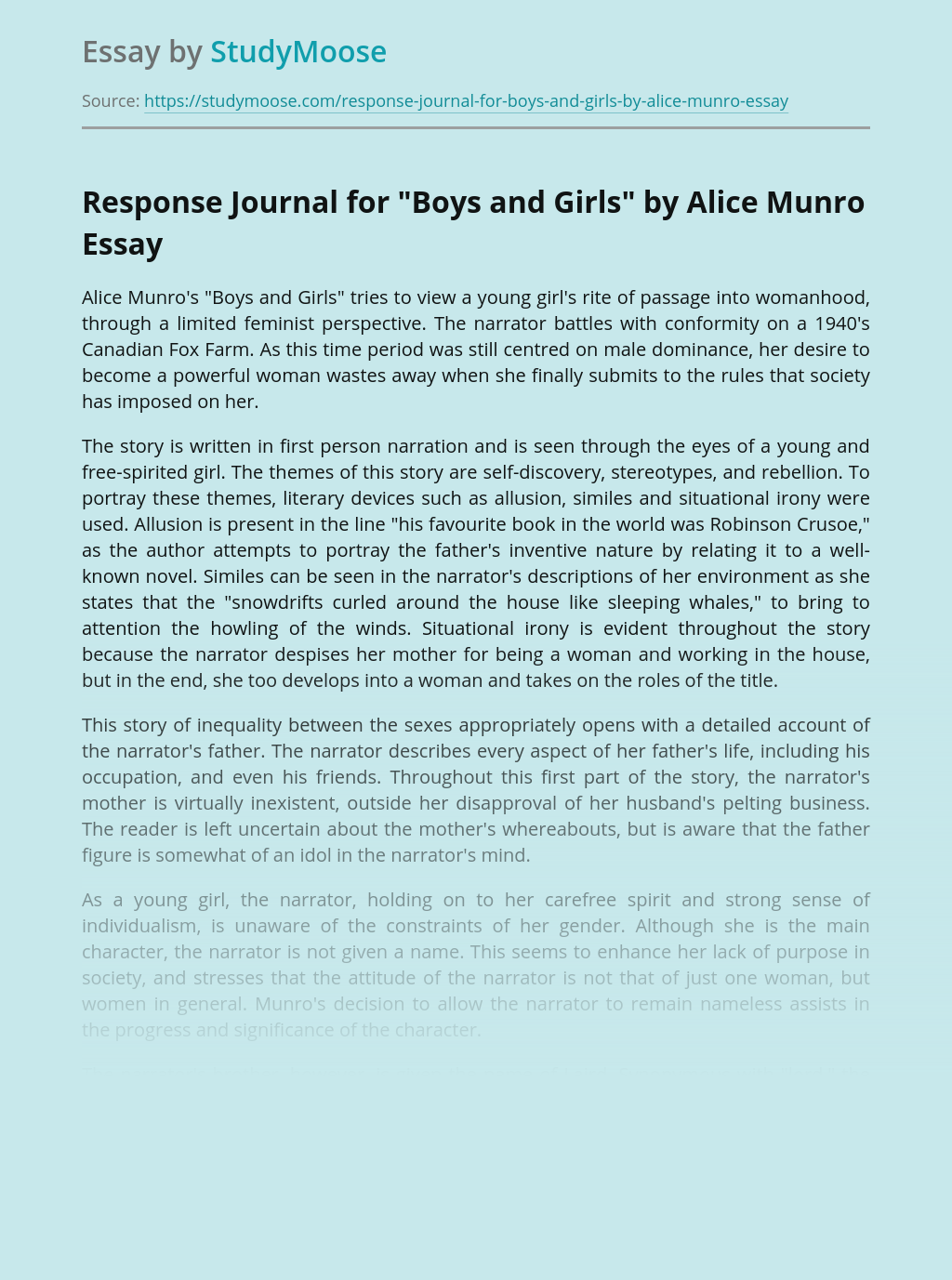