How I Met My Husband by Alice Munro?

In the short story “How I Met My Husband” by Alice Munro the structure of the plot and the conflict work in unity to reach the conclusion. This story has a sympathetic protagonist dealing with a relatable conflict, suspense, and a twist ending that may keep the reader thinking after the last lines have been read.

The protagonist in this story, Edie, is a timid person who is always doing whatever makes other people happy and never says what she wants.

Turn in your highest-quality paper
Get a qualified writer to help you with
“ How I Met My Husband by Alice Munro? ”
Get high-quality paper
NEW! AI matching with writer

She describes herself as “shy” (Munro 127). The Peebles’ family employs her, so she wants to do her job and not get fired. That adds to her desire to please. She uses the word “scared” multiple times when talking about working, twice on page 131, even though she says the Peebles family is kind to her (130). On page 130 she smokes a cigarette when Chris offers her one because she “couldn’t even shake (her) head no”. Then she kisses him on page 136, even though she doesn’t really know what is going on.

She has never kissed a boy before except “on a dare” (136) and she barely knows this guy, but she goes along with it.

Edie does not seem like she would be a character the reader would sympathize with because of this insecurity, but it stems from her social status. The main conflict in the story is Edie versus society. She is in awe of the life she lives being the “hired girl” for the Peebles (129). The reader can see this in the way she describes washing dishes on page 128 and how she “loved the double sink” (127).

She only took a bath once a week because she felt like taking one “oftener” would make it less wonderful (128). She tries on Mrs. Peebles’ clothes when she is not home (128) because she wants to pretend what it would be like to have clothes like that. “There was no limit on ice cubes” in the Peebles’ home, which she takes advantage of (129). When Chris comes to the house for water, she offers him water from the tap, to let him know they have “piped water” (129), showing him the status she has because she lives with a family who can afford to have it. The reader is drawn to Edie in the following passage because it demonstrates her struggle with wanting to be part of that socioeconomic group.

The way the plot is arranged adds to the suspense. The title “How I Met My Husband” sets the reader up to look for who the husband in the story will be. The story starts with the plane (125), so the reader may assume it is related to Edie’s husband. The pilot of the plane is Chris, so when he calls Edie “beautiful” (129) it seems like it will be him. Throughout the whole story, Chris is a major character and there are no other men involved. When Alice comes into the picture as his fiancée (133), the suspense increases. At that point the reader is not sure that Chris will end up with Edie, and if se does not then her husband must be someone else. Since it is already so late in the story, the reader does not know who the husband could be. The reader may also wonder what will happen to Alice if Chris is the person who is Edie’s husband.

The dialogue between Alice, Mrs. Peebles, Edie, and Loretta Bird at supper keeps the reader engaged. The reader learns that Chris is “terribly restless, since the war” (137). Edie finds herself lying to the women about where Chris said he was going (137). Alice Munro uses foreshadowing when Edie says about Alice “I never thought of myself as being in any way like her, or coming to the same troubles, ever” (137). The reader may wonder when she will come to the same troubles and if those troubles will be because of the “restless” pilot.

When Edie realizes Chris is never going to write her a letter on page 140, the reader realizes he is not her husband. The suspense continues because the reader has to think of who it might be, with the story close to an end. The mailman is a small character, only mentioned after Edie first noticing that “today (isn’t) the day” that Chris’s letter has come (139). That day is described in detail. The leaves were changing colors, and the fairgrounds where the pilot used to have his plane are covered with milkweed and dark teasels, “so much like fall” (139-140). The mailman, Edie’s husband, is described as a Carmichael who was “a young man, shy, but good-humored” (139), which is not as detailed as the way the day is described. The lack of emphasis there is on the mailman adds to the unexpectedness of the ending.

Edie’s story of how she met her husband has more concern with another man than with him. On page 136 it says “little kisses, so soft, I can’t ever let myself think about them” suggesting that the matured Edie still longs for the pilot. She can remember those details, but she cannot remember the movie she went to see with her husband on their first date (140). In the last line of the story she says her husband thinks she was waiting by the mailbox for him, and she has never told him that she was actually waiting for a letter from the pilot because she “like(s) for people to think what pleases them and makes them happy” (140). This line shows Edie never changed. She is still the person who wants to please everyone. At the end of the story the reader may wonder if she is even in love with her husband at all, or if she married him because she was too afraid to hurt his feelings by saying no.

How I Met My Husband by Alice Munro?. (2016, Dec 14). Retrieved from https://studymoose.com/how-i-met-my-husband-by-alice-munro-essay 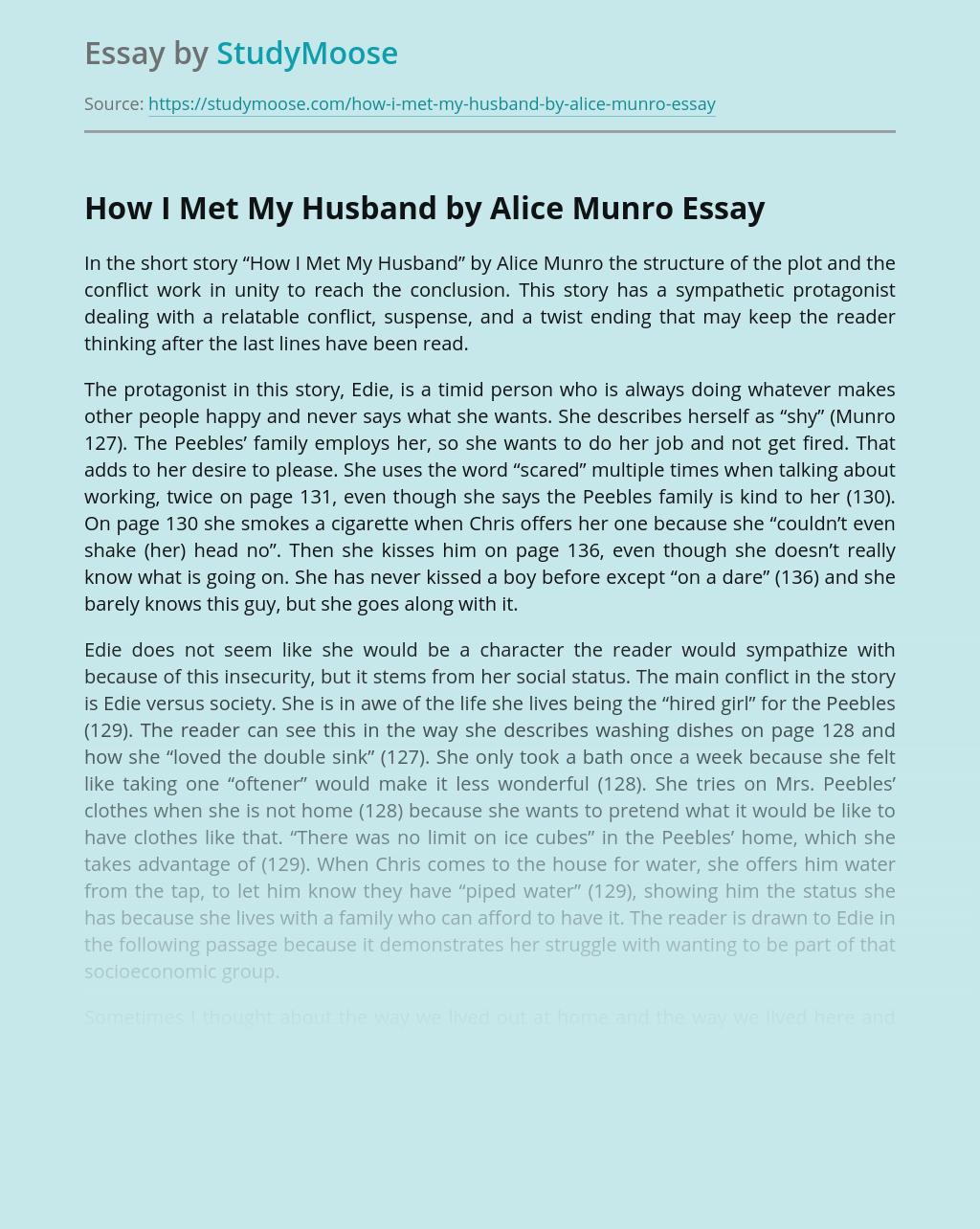 Turn in your highest-quality paper
Get a qualified writer to help you with
“ How I Met My Husband by Alice Munro? ”
Get high-quality paper
Helping students since 2015
Stay Safe, Stay Original